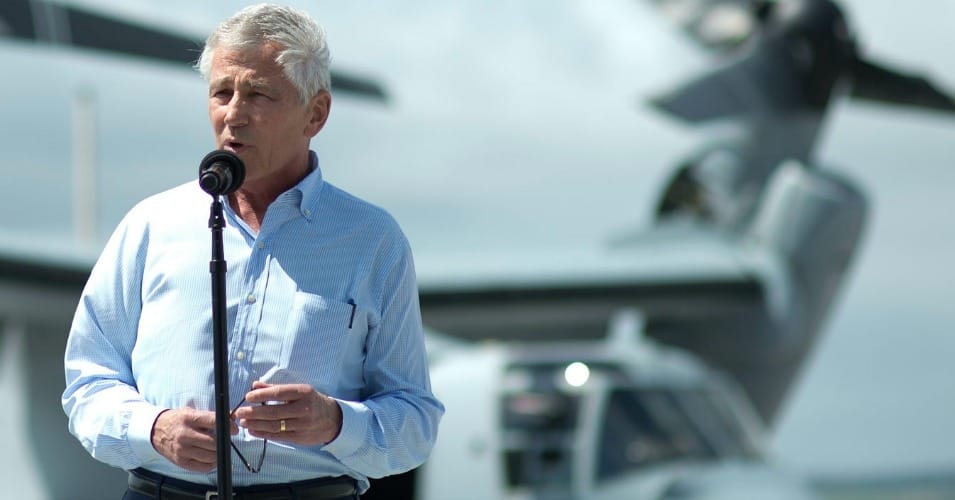 Secretary Chuck Hagel’s resignation should be a time for the nation to step back and reexamine its violent approach to extremism, which has led to an expansion of terrorist groups, and inflated military spending. (Photo: DoD/Erin A. Kirk-Cuomo)

Secretary of Defense Chuck Hagel was supposed to steer the Pentagon away from a decade of war, including bringing US troops home from Afghanistan and paving the way for a reduction in the Pentagon budget. Instead, the Obama administration has opted for remaining in Afghanistan, continuing the disastrous drone wars in Pakistan and Yemen, and dragging our nation into another round of military involvement in Iraq, as well as Syria. The ISIL crises has also been used as a justification for not cutting the Pentagon budget, as required by sequestration.

The issue facing this nation is not who replaces Hagel, but what policy decisions we want to Pentagon to implement.

Troops out of Afghanistan: The public has long soured on US military involvement in Afghanistan. President Obama’s recent executive decision to keep the troops there to confront the Taliban is taking us down the wrong path. After 13 years of occupation, it’s time for the Afghan people to control their own nation.

No US military intervention in Iraq/Syria:  The Obama administration’s move to engage militarily in Iraq and Syria is also the wrong–– and dangerous–– path. US intervention, including over 6600 bombings to date, has already become a recruiting tool for ISIS and has strengthened Syrian resident Assad. And with over 3,000 US troops in Iraq in dangerous missions, President Obama’s promise of “no troops on the ground” is indeed hollow. ISIL must be confronted through political solutions, such as renewed talks between Assad and the Free Syrian Army, more pressure in Saudi Arabia to stop funding extremism, greater efforts by Turkey to stop the flow of recruits and weapons into Syria, and negotiated cooperation from Iran and Russia.
Stop the drone wars: President Obama’s reliance on drone warfare in Pakistan has turned large portions of the population against the United States. It is the Pakistani government, not the US, that must counter the Taliban. In Yemen, the administration’s drone war has put the US in the midst of what has become a bloody sectarian conflict. And US drone strikes have served to increase the number of Yemenis joining Al Qaeda in the Arabian Peninsula to seek revenge.

Cut and audit Pentagon spending: With other issues clamoring for attention and funds — from healthcare and schools to infrastructure and green energy– we need to stop the massively bloated Pentagon budget. The Pentagon can’t account for billions of dollars each year, literally, and is unable to pass an audit. It’s time to demand that the Pentagon rein in its rampant waste, cut its oversized budget, and become accountable to the taxpayers by passing an audit.
The talk about resetting President Obama’s security team is misplaced; we should be focusing instead on resetting his bellicose policies. Secretary Chuck Hagel’s resignation should be a time for the nation to step back and reexamine its violent approach to extremism, which has led to an expansion of terrorist groups, and inflated military spending. Let’s put more emphasis on the State Department and political solutions instead of continuing failed wars and starting new ones. We owe it to the youth of our nation who have never lived without war.