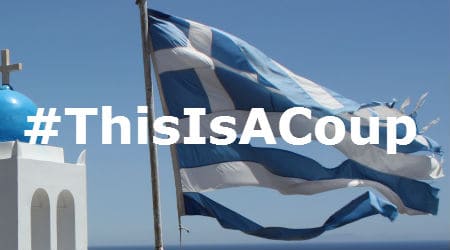 ‘This is the politics of humiliation,’ he told Late Night Live. ‘The troika have made sure that they will make him eat every single word that he uttered in criticism of the troika over the last five years. Not just these six months we’ve been in government, but in the years prior to that.

The deal, agreed to on Monday after 17 hours of talks with eurozone leaders, contains tough conditions including pension cuts, tax increases and the movement of public assets into a trust fund to pay for the recapitalisation of Greek banks.

Mr Varoufakis rejected the deal in the strongest possible terms, comparing it to the 1967 coup d’état that installed a military dictatorship in the Mediterranean nation.

‘In the coup d’état the choice of weapon used in order to bring down democracy then was the tanks. Well, this time it was the banks. The banks were used by foreign powers to take over the government. The difference is that this time they’re taking over all public property.’

Mr Varoufakis suggested that Mr Tsipras may call a snap election rather than bring the deal before the Greek parliament, saying he would be ‘very surprised’ if Mr Tsipras wanted to stay on as prime minister.

He insisted, however, that he and Mr Tsipras remain on good terms, and that he has kept a low profile over the last week in order to support Mr Tsipras and his successor in the finance ministry, Euclid Tsakolotos.

‘I jumped more than I was pushed,’ said Mr Varoufakis, describing his resignation in the immediate aftermath of the ‘no’ vote in the July 6 referendum on bailout terms similar to those accepted on Monday.

‘I entered the prime minister’s office elated. I was travelling on a beautiful cloud pushed by beautiful winds of the public’s enthusiasm for the victory of Greek democracy in the referendum. The moment I entered the prime ministerial office, I sensed immediately a certain sense of resignation—a negatively charged atmosphere. I was confronted with an air of defeat, which was completely at odds with what was happening outside.

‘At that point I had to put it to the prime minister: “If you want to use the buzz of democracy outside the gates of this building, you can count on me. But if on the other hand you feel like you cannot manage this majestic ‘no’ to an irrational proposition from our European partners, I am going to simply steal into the night.”’

The former finance minister also described the Greek government’s secret preparations to print drachmas in the event of the country being forced to leave the euro.

‘As a responsible government, knowing full well that there was a very significant alliance within the eurogroup whose purpose was to throw us out of the euro, we had to make contingencies,’ he said. ‘We had to have a small team of people in secret who would create the plan in case we were forced to exit the monetary union known as the eurozone.’

‘Of course, there is a conundrum here. Once this plan begins to be implemented, once you go from five people working on it to 500—which is the minimum you need to implement it—it becomes public knowledge. The moment it becomes public knowledge, the power of prophecy creates a dynamic of its own … We never made that transition from five to 500. We never felt we had a mandate to do it. We never planned to do it. We had the design on paper but it was never activated.’

Mr Varoufakis said that he will remain as a backbencher in the Greek parliament, where he has ‘a lot more room to manoeuvre and speak the truth’. He warned however, that austerity will further embolden the country’s far right.

‘In parliament I have to sit looking at the right hand side of the auditorium, where 10 Nazis sit, representing Golden Dawn. If our party, Syriza, that has cultivated so much hope in Greece … if we betray this hope and bow our heads to this new form of postmodern occupation, then I cannot see any other possible outcome than the further strengthening of Golden Dawn. They will inherit the mantle of the anti-austerity drive, tragically.