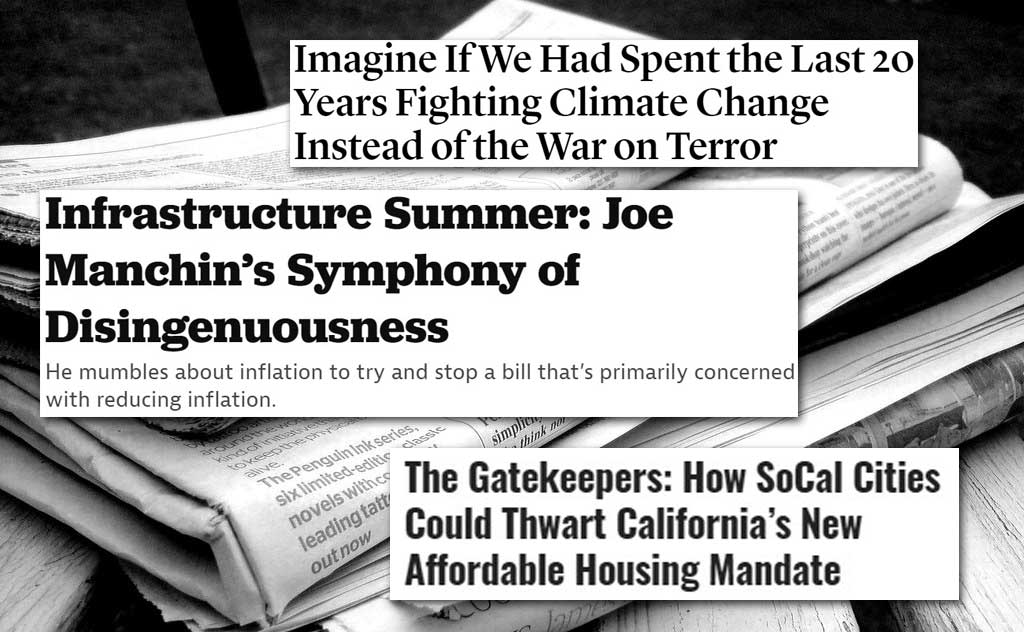 Infrastructure Summer: Joe Manchin’s Symphony of Disingenuousness • Imagine If We Had Spent the Last 20 Years Fighting Climate Change Instead of the War on Terror • The Gatekeepers: How SoCal Cities Could Thwart California’s New Affordable Housing Mandate by Robin Urevich

More than half of the reconciliation bill attempts to take the biggest drivers of the increase in cost of living in American life over the past 40 years—health care, education, and housing—and bring those costs down for working families. These costs in particular have been the greatest hurdle to upward mobility and a sustainable middle-class lifestyle. The bill is singularly oriented toward reducing those costs. Read the article

The reality is that warding off the worst-case scenario of climate change, which the latest IPCC report says is still possible, will require massive amounts of spending upfront. Not only do we have to stop fossil fuel extraction and shift to decarbonized energy, but we have to do so in a way that does not leave an entire generation of workers destitute. Read the article

At least on paper, California has never been more poised to attack the problem. A new fair housing law — the furthest reaching of its kind in the country — requires wealthy neighborhoods and exclusive towns to rip down the gates, literal or figurative, that reserve high-quality schools and clean air only for those who can afford multimillion-dollar homes. California jurisdictions can’t relegate newly planned apartments to the outskirts of town, or to lower-income neighborhoods, and every city’s housing plan must assess patterns of segregation and take steps to break them.

But a Capital & Main investigation has found evidence that California state government’s efforts to tackle its housing debacle may be headed for trouble at the local level. Read the article