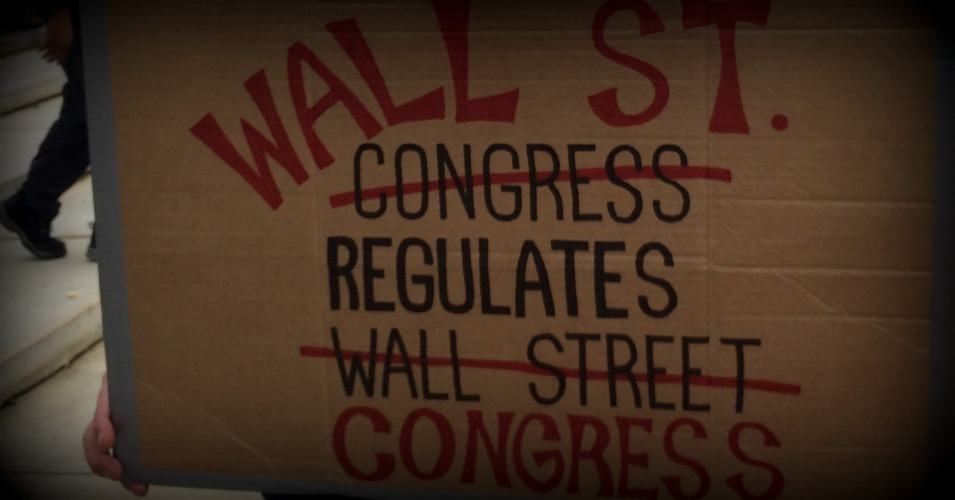 In a massive protest attempting to raise awareness of and spark outrage about America’s corrupt campaign finance system and crumbling democracy on Monday, marches and sit-ins organized by Democracy Spring drew national attention and celebration on social media — though, unsurprisingly, they garnered little coverage in the mainstream.

Democracy Spring is an amalgamation of many high-profile progressive groups and public figures, and its stated goal is to organize in opposition to a political system that has permitted the wealthy few to “dominate the ‘money primary’ that decides who can run for office” and rig voting laws to their advantage.

“We will make this election a referendum on whether our democracy should belong to the People as a whole or to the billionaire class alone.”

Well, as the protests were taking place in front of the Capitol and elsewhere, headlines drew attention to another event of quite a different nature: Goldman Sachs, one of America’s most prominent financial institutions, settled with the Justice Department for $5.1 billion and admitted that it defrauded investors.

While this case is unique in that Goldman acknowledged the “facts” about its behavior put forward by the Justice Department, it is also business as usual for one crucial reason: None of the executives involved are going to see the inside of a jail cell, and no criminal charges were levied.

Witness here the stark contrast, a striking example of America’s two-tiered justice system — one tier for the rich and one for everyone else — on full display.

“Too-big-to-fail, meet small-enough-to-jail,” as Matt Taibbi wrote in his book The Divide.

As hundreds of peaceful demonstrators were being hauled to jail for calling attention to a system that permits the rich and powerful to buy the government and get away with tanking the economy, those who played a significant role in tanking the economy were making a deal with the government that allows them to walk, scot-free. This case was, in fact, a victory for Goldman Sachs and America’s most powerful financial institutions, as many have observed.

And if you thought the $5.1 billion settlement wasn’t nearly enough, it gets worse. As Nathaniel Popper observes in the New York Times, “Buried in the fine print are provisions that allow Goldman to pay hundreds of millions of dollars less — perhaps as much as $1 billion less — than that headline figure. And that is before the tax benefits of the deal are included.”

Yes, Goldman Sachs will be offered incentives for paying for the damage inflicted by its fraudulent practices. And, again, no one goes to jail.

Democracy Spring is an organized wake-up call, one that seeks to remind us that without organized action, and without public awareness, nothing will change: The rich, and their partners in government, will carry on with business as usual. As the past several decades have demonstrated, business as usual for America’s largest financial institutions spells disaster for the population, for the global economy, and, of course, for the planet.