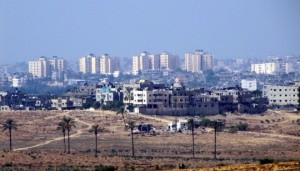 A view of the Gaza Strip from Israel. (Credit: David Berkovitz / cc / Flickr)

According to B’Tselem, the siege that Israel has imposed on Gaza since Hamas took control of Gaza’s security apparatus in June 2007 has greatly damaged Gaza’s health system, which already had considerable shortcomings. Now, many services and life-saving treatments are not available to Palestinians inside Gaza, and treatment of cancer and heart patients is postponed, as medical supplies and equipment are delayed.

Even some basic necessities, such as clean drinking water and removal of solid waste is not widely available. It is estimated that 30 percent of Gaza Strip residents do not receive water on a regular basis. In addition, many diagnostic and emergency medical services cannot operate because of lack of generators. Statistics from the World Health Organization showed that 19 percent of necessary medicines were lacking, as well as replacement parts for critical equipment and several disposable but necessary items such as bandages, syringes and plaster for casts.

In the meantime, Israel severely limits the amounts of permits for hundreds of patients to enter Israel for advanced treatment unavailable in Gaza. Physicians for Human Rights Israel questioned the legality of the procedure whereby every exit permit from Gaza for medical treatment requires a check by the Israel Security Agency (ISA). According to that organization, in several cases the ISA abused this procedure to pressure patients to collaborate providing intelligence information in exchange for a permit.

Despite its so-called “disengagement” from the Gaza Strip in September of 2005, Israel continues to hold effective control of many aspects of Gazans’ lives, including check points and the entrance of basic supplies. This situation imposes on Israel responsibility for the safety and welfare of Gaza’s residents, according to precepts established in The Hague and Geneva Conventions. Because of its control of residents’ lives in Gaza and the curtailment of its movements, Israel seriously breaches Palestinians’ right to optimal medical care inside the Strip and access to medical care outside the area.

In 2009, writing for The Guardian, Avi Shlaim, Oxford professor of international relations, stated, “The Israeli occupation of the West Bank and the Gaza Strip in the aftermath of the June 1967 war had very little to do with security and everything to do with territorial expansionism. The aim was to establish Greater Israel through permanent political, economic and military control over the Palestinian territories. And the result has been one of the most prolonged and brutal military occupation of modern times.”

Shlaim also stated, “Gaza, however, is not simply a case of economic under-development but a uniquely cruel case of deliberate de-development….Gaza is a classical case of colonial exploitation in the post-colonial era.” For Shlaim, settlements in Palestinian land have become an insurmountable obstacle to peace. He calls them “the instrument of exploitation and the symbol of the hated occupation.”

The Israeli government often contends that they gave freedom to the Gazans and rather than being thankful they continued throwing rockets into Israel. Shlaim, however, provides a different analysis. “Hamas, the Islamic resistance movement, conducted an effective campaign to drive the Israelis out of Gaza. The withdrawal was a humiliation for the Israeli Defense Forces. To the world, Sharon presented the withdrawal from Gaza as a contribution to peace based on a two-state solution. But in the year after, 12,000 Israelis settled on the West Bank, further reducing the scope for an independent Palestinian state. Land-grabbing and peace-making are simply incompatible. Israel had a choice and it chose land over peace,” wrote Shlaim.

In the meantime, as peace conversations ignore the needs of Gazans, the people in the Strip are deprived of basic health and human rights leading 1.5 million people to the brink of a humanitarian catastrophe. The situation in Gaza is nothing but the fight of the oppressors against the oppressed, a conflict that corrodes Israel’s own soul.

César Chelala, MD, PhD, is a co-winner of an Overseas Press Club of America award. He is also the foreign correspondent for Middle East Times International (Australia).