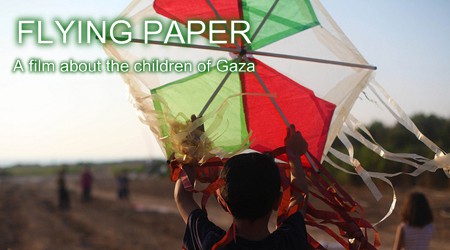 Free and open to all.
Contributions to Palestine Children’s Relief Fund will be requested. Bring your checkbook! 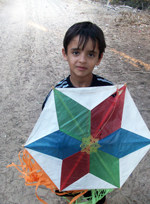 Flying Paper is the uplifting story of Palestinian children in Gaza engaged in the fascinating culture of kite making and flying.

The film follows Musa, a charismatic teenaged kite-maker in the village of Seifa, and Abeer an aspiring young journalist in the Jabalya refugee camp. They join a remarkable quest, along with thousands of other children, to shatter the Guinness World Record for the most kites ever flown. It showcases the creative resilience of these children making and flying kites despite the difficult realities they face in their daily lives. The film has been co-produced with young Palestinians in Gaza trained by the filmmakers through a youth media program called Voices Beyond Walls. Through the perspective of children and young people comes a story of determination and artistic

expression as the youth in the film work together to achieve a shared goal.

While the record-breaking event is what drives the film’s narrative arc, it is the everyday stories of the young kite makers that will touch audiences through their humor and playful spirit. The film seeks to humanize the conflict through a touching cinematic rendering of the fascinating kite culture among children as a form of creative resistance in Gaza.

“A cinematic journey into the kite culture among Palestinian youth in the Gaza Strip, and their quest to shatter the Guinness World Record for the most kites ever flown.” – Alessandra Bajec, Progressive.org

“Flying Paper promises to be one of those films that I will never forget.” – Samya Ayish, CNN Arabic.

“The film offers a rare glimpse into the humanity of Gaza …” – Debra Kamin, The Times of Israel.

Roger Hill graduated from Ohio University with a degree in Film, Sociology and African American Studies. He is the founder of MentalRev Productions. His work has been seen in the Athens International Film and Video Festival, Minneapolis Film Festival, the traveling Take Back Democracy Film Festival, The Arab Film Festival in San Francisco, and many more. Hill worked as a trainer with the Voices Beyond Walls participatory media program in Gaza during the summer of 2010.

Rajaie Batniji, born in Gaza’s Shujayiya neighborhood, is a Clinical Assistant Professor of Medicine at Stanford. He holds a doctorate in international relations from Oxford University, and has published widely on public health in occupied Palestine.

Artistic Statement from the Producers: The tone of Flying Paper is a counter to the serious and heavy tone of most documentaries on the subject of Palestine. We aim to make an enjoyable Narrative Documentary that is inspiring and uplifting, which focuses on the achievements of youth in Gaza who endure hardships, but are resilient in their efforts to represent themselves and their culture with pride and grace. The political situation and suffering of the Palestinians in Gaza isn’t ignored in the film, but rather it is part of the context in which an inspiring story with engaging characters takes place.

Thanks to First Baptist Church of Palo Alto for donating the use of the hall!

Endorsed and co-sponsored by: