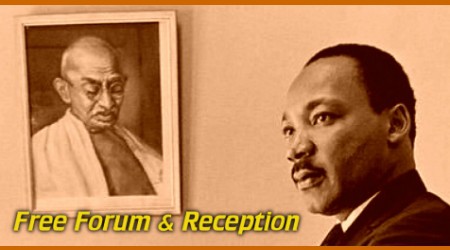 Following the program, please join us for a Reception with Dr. Carson. We’ll provide the drinks and food, you provide the sparkling conversation and camaraderie.

An international conference to mark the 150th anniversary of Gandhi’s birth will take place at Stanford from Oct. 11 – 13. This historic gathering will be the first event of the Gandhi-King Global Initiative (GKGI), an effort to build an international network of institutions, organizations, and activists committed to the nonviolent struggle for human rights. This network will seek to enhance the rich history of intellectual and political collaboration between activists inspired by Gandhi and King. Learn about the role GKGI may play internationally and how you can get involved.

Selected in 1985 by Mrs. Coretta Scott King to edit and publish the papers of her late husband, Stanford University historian Clayborne Carson has devoted most of his professional life to the study of Martin Luther King, Jr., and the movements King inspired.

Under Carson’s direction, the King Papers Project has produced seven volumes of a definitive, comprehensive edition of King’s speeches, sermons, correspondence, publications, and unpublished writings. Dr. Carson has also edited numerous other books based on King’s papers, including The Autobiography of Martin Luther King, Jr. In 2005 the King Papers Project became part of the Martin Luther King, Jr., Research and Education Institute at Stanford University, with Dr. Carson serving as its founding director.