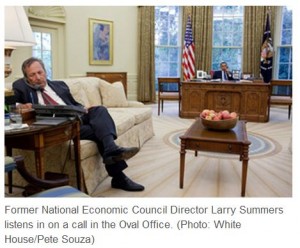 The idea that Barack Obama would still consider appointing Lawrence Summers to head the Federal Reserve rather than order an investigation into this former White House official’s Wall Street payments, reported Friday by The Wall Street Journal, mocks the president’s claimed concern for the disappearing middle class. Summers is in large measure responsible for that dismal outcome, and twice now, after top level economic postings in both the Clinton and Obama administrations, he has returned to gorge himself at the Wall Street trough.

As Clinton’s Treasury secretary, he pushed for radical deregulation allowing investment bankers to take wild risks with the federally insured deposits of ordinary folks, a disastrous move compounded when he successfully urged Congress to pass legislation banning the effective regulation of the tens of trillions in derivatives that often proved to be toxic.

The first direct result of those new laws was the mammoth merger that created Citigroup. Eight years later, the federal government had to save Citigroup from bankruptcy brought on by its leading role in the sale of those toxic mortgage-based derivatives, to the tune of $45 billion in taxpayer funds and backing $300 billion of the bank’s bad paper.

At that time, Citigroup paid Summers—teaching at Harvard and yet hustling as a Wall Street consultant—$45,000 for a lecture, a piddling amount compared with the $135,000 he got per talk from Goldman Sachs. In all, while he was advising candidate Obama during the 2008 election season, Summers made off with $8 million in Wall Street compensation, with the lion’s share coming from the D.E. Shaw hedge fund.

Some might argue this is ancient history, but as The Wall Street Journal reported, Summers, after serving as a top economic adviser to Obama, has done just as well on his second passing through the revolving door between Washington and Wall Street. He rejoined the D.E. Shaw hedge fund, not having done anything to inconvenience its operation while in government, and got a gig with the operator of Nasdaq and other heavy hitters.

The Journal also revealed that Summers re-entered service with Citigroup, but neither he nor the bank has revealed his current rate of pay. The Journal did report that Summers has been paid more than $100,000 per speech for some of his recent talks to the financial industry goliaths. The newspaper also noted that at one Citigroup forum in March, “Mr. Summers expressed surprise about the persistent backlash in Washington toward big banks. … ”

Speaking of lectures, Obama should deliver one to Summers, detailing why his prior record renders him unfit for future public service. As Obama pointed out in his speech on the economy Wednesday, “The income of the top 1 percent nearly quadrupled from 1979 to 2007, while the typical family’s barely budged.” Eight of those years of income stagnation occurred during the Clinton presidency, when Summers was designing policy that led to the derivative-induced housing bubble that exploded on George W. Bush’s watch.

Nor did it get better when Obama brought Summers into a key economic role in his administration. As Obama conceded in his speech last week, “Nearly all the income gains of the past 10 years have continued to flow to the top 1 percent. The average CEO has gotten a raise of nearly 40 percent since 2009, but the average American earns less than he or she did in 1999. And companies continue to hold back on hiring those who have been out of work for some time.”

That’s because Obama, following Summers’ advice, adopted the save-the-bankers-first philosophy of his predecessor, with outrageous publicly funded bailouts of the same financial conglomerates that had put the economy into a deep tailspin. It is a policy that continues to this day, with an outlay of $85 billion a month by the Federal Reserve to purchase toxic assets from the banks’ books in the hopes that they will reinvest that largess. But as the president’s jobs critique noted, they haven’t.

Trillions have been passed on to the banks to relieve them of the burden of the toxic derivatives they created, derivatives that then-Treasury Secretary Summers testified to Congress were no threat to the “thriving market” that “has assumed a major role in our own economy and become a magnet for derivative business from around the world.” No threat there because, “given the nature of the underlying assets involved … there would seem to be little scope for market manipulation. … ”

This is an idiotic statement by someone Obama considers brilliant, or as the president put it when Summers left the White House in September 2010 to get back into the big money game: “I will always be grateful that at a time of great peril for our country, a man of Larry’s brilliance, experience and judgment was willing to answer the call and lead our economic team.”

What leadership? According to last week’s McClatchy-Marist poll, 54 percent of Americans think the U.S. remains in a recession, and 60 percent see the country “going in the wrong direction.” Further, an Associated Press survey released Sunday concludes that “Four out of 5 U.S. adults struggle with joblessness, near-poverty or reliance on welfare for at least parts of their lives, a sign of deteriorating economic security and an elusive American dream. Survey data exclusive to the Associated Press points to an increasingly globalized U.S. economy, the widening gap between rich and poor, and the loss of good-paying manufacturing jobs as reasons for the trend.”

That is what Obama conceded in his speech last week, which underscores how outrageous it is that he would consider bringing back brilliant Larry, who caused so much of that misery.