For campaign finance limits, constitutional amendment may be the only way 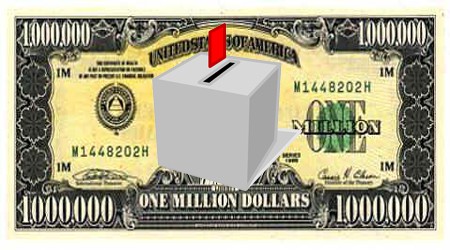 Wednesday’s Supreme Court decision further eviscerating limits on political donations is not by itself a disaster. But the cumulative effect of eight years of rulings dismantling the campaign finance reforms enacted after Watergate, culminating with this opinion on aggregate contributions, is devastating to democracy.

It amplifies the voice of the rich and powerful over that of the general public to a degree almost insurmountable. Elimination of all limits on donations to candidates now seems possible, including the ban on corporate giving.

A constitutional amendment regulating campaign finance may be the only way for average Americans to reclaim their voice. The barriers are huge, but we hope good-government organizations will step up to the challenge.

Ironically, the five justices in the majority on this case, McCutcheon v. FEC, are the same five who last summer struck down part of the Voting Rights Act, which since 1965 had protected minority voters from disenfranchisement.

Both decisions either ignore or condone the alarming reality of American politics today.

On voting rights, the majority ignored the systematic national effort by Republicans to restrict access to the ballot by poor and minority voters (i.e., Democrats). In McCutcheon, they ignored the widespread, corrosive effects of money on Congress.

The McCutcheon case challenged the federal limit per donor, which is a cumulative $123,200 to candidates, parties and political action committees over the two-year federal election cycle. Now donors will be able to give up to the $5,200 limit for an individual candidate to contenders in as many federal races as they wish, effectively buying access to a majority of Congress.

But because candidates can give money to each other, one donor could end up giving millions to just a few politicians who party chiefs say need it most. How could that not influence the lawmakers’ votes?

This comes on top of the 2010 Citizens United ruling, which helped unleash a flood of unregulated, anonymous money.

As UC-Irvine election law expert Rick Hasen noted, the Supreme Court has not upheld a campaign finance limit since Samuel Alito joined in 2006. Any limits that remain — including the ban on corporations giving directly to candidates — probably won’t for long.

Many of our most intractable problems — gun violence, the gap between rich and poor, the pension crisis, the failure to pass immigration reform — can be traced to the way campaigns are financed. Votes are purchased, pure and simple.

The only sure remedy is a constitutional amendment to clarify, for the Supreme Court, that non-billionaire Americans’ interests count, too.