Five Years of Citizens United: Whose Government? Whose Voice? 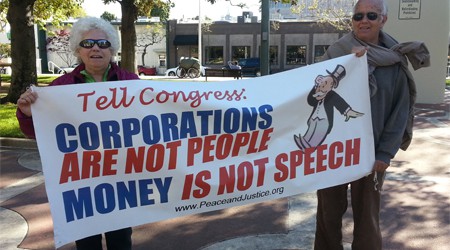 PPJC organized an emergency response demonstration in Feb. 2014 after the Supreme Court’s ‘McCutcheon’ decision, which allowed even more money into politics. Photo by Paul George

By Jay Riestenberg
Common Cause

In November 2008, American voters made history by electing Barack Obama, a dynamic newcomer to national politics and the first African American to be chosen as President. He came into office on a wave of hope, built largely on his promise to change the way Washington works. America is more than a collection of “red states” and “blue states,” he once famously declared. “We are one people, all of us pledging allegiance to the stars and stripes, all of us defending the United States of America.”

But as President Obama moves into the fourth quarter of his presidency, America is more divided and Washington is more dysfunctional than ever. Officially, our economy has recovered and most of the troops we sent to Iraq and Afghanistan after the 9/11 attacks have come home. But for most Americans, prosperity remains elusive. Our government seems unable to address the nation’s most pressing problems, and when it manages to act, it often does so in ways that work more for powerful special interests than for the rest of us.

We have a big country and a complex society; none of us should be under the illusion that our problems can be solved easily. But in these pages, Common Cause makes the case that we will not begin to solve them until we rein in the power of big money in our elections and our government.

Progress toward that goal has been severely undermined by the current Supreme Court’s drive to deregulate election spending and vest corporations with constitutional rights. Our report examines how a string of decisions by the Court, culminating in the Citizens United decision of January 2010, has opened the floodgates to big money influence in our democracy, giving special interests and the wealthy more control over our government and economy than they’ve enjoyed since the Gilded Age of the late 19th century.

A growing amount of that money has come from elaborately concealed donors, individual and corporate, allowing them to drown out the voices of the rest of us and to block legislation designed to ease the economic burdens facing millions of families, make our kids and our streets safer, stabilize our climate, and protect the free flow of information that is vital to democracy and a 21st century economy.That leaves the rest of us asking whether government of, by and for the people is a thing of the past, and what we can do to get it back.