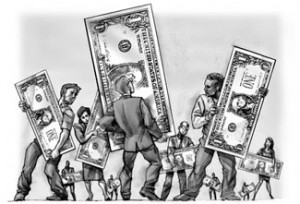 The first step is to learn the facts, and then to get angry and to ask ourselves, as progressives and caring human beings, what we can do about the relentless transfer of wealth to a small group of well-positioned Americans.

Each of the Koch brothers saw his investments grow by $6 billion in one year, which is three million dollars per hour based on a 40-hour ‘work’ week. They used some of the money to try to kill renewable energy standards around the country.

Their income portrays them, in a society measured by economic status, as a million times more valuable than the restaurant server who cheers up our lunch hours while hoping to make enough in tips to pay the bills.

A comparison of top and bottom salaries within large corporations is much less severe, but a lot more common. For CEOs and minimum-wage workers, the difference is $5,000.00 per hour vs. $7.25 per hour.

2. A single top income could buy housing for every homeless person in the U.S.

On a winter day in 2012 over 633,000 people were homeless in the United States. Based on an annual single room occupancy (SRO) cost of $558 per month, any ONE of the ten richest Americans would have enough with his 2012 income to pay for a room for every homeless person in the U.S. for the entire year. These ten rich men together made more than our entirehousing budget.

For anyone still believing “they earned it,” it should be noted that most of the Forbes 400 earnings came from minimally-taxed, non-job-creating capital gains.

3. The poorest 47% of Americans have no wealth

In 2009 the poorest 47% of America owned ZERO PERCENT of the nation’s wealth (their debt exceeded their assets).

At the other extreme, the 400 wealthiest Americans own as much wealth as 80 million families — 62% of America. The reason, once again, is the stock market. Since 1980 the American GDP has approximately doubled. Inflation-adjusted wages have gone down. But the stock market has increased by over ten times, and the richest quintile of Americans owns 93% of it.

4. The U.S. is nearly the most wealth-unequal country in the entire world

Out of 141 countries, the U.S. has the 4th-highest degree of wealth inequality in the world, trailing only Russia, Ukraine, and Lebanon.

Yet the financial industry keeps creating new wealth for its millionaires. According to the authors of the Global Wealth Report, the world’s wealth has doubled in ten years, from $113 trillion to $223 trillion, and is expected to reach $330 trillion by 2017.

5. A can of soup for a black or Hispanic woman, a mansion and yacht for the businessman

That’s literally true. For every one dollar of assets owned by a single black or Hispanic woman, a member of the Forbes 400 has over forty million dollars.

Minority families once had substantial equity in their homes, but after Wall Street caused the housing crash, median wealth fell 66% for Hispanic households and 53% for black households. Now the average single black or Hispanic woman has about $100 in net worth.

Institute a Financial Speculation Tax, both to raise needed funds from a currently untaxed subsidy on stock purchases, and to reduce the risk of the irresponsible trading that nearly brought down the economy.

Perhaps above all, we progressives have to choose one strategy and pursue it in a cohesive, unrelenting attack on greed. Only this will heal the ugly gash of inequality that has split our country in two.