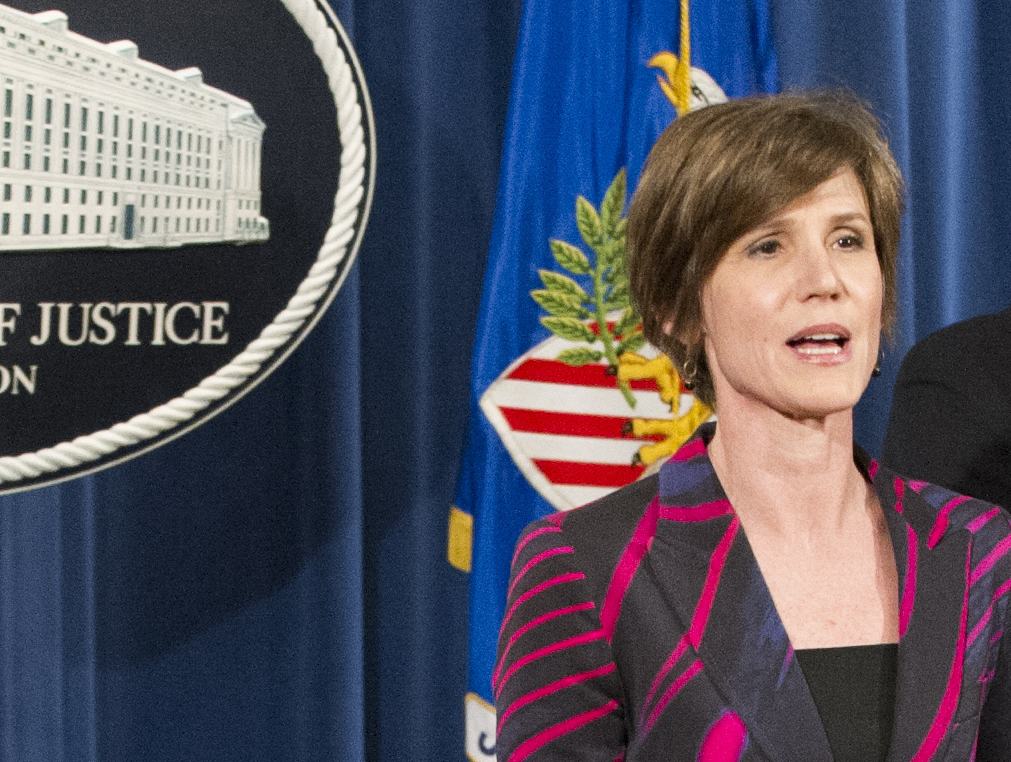 With the firing of Acting Attorney General Sally Yates late Monday, President Trump has made it clear there is no room for dissent nor a moral compass in his increasingly authoritarian regime.

On Friday, Trump issued executive orders banning war refugees from Syria from entering the U.S. and suspending entry from seven other Muslim counties for 90 days. Immediate implementation of that order on Saturday morning led to chaos at airports across the country and globally, extensive spontaneous protests and a series of federal district court rulings suspending the directive on multiple grounds for being unconstitutional.

Take a look at the letter that Yates sent to the White House that caused her firing. It clearly explains why the nation’s top law enforcement official decided to stand with the law, the U.S. Constitution and the Department of Justice’s historic mission to protect minorities—and not a presidential decree that was ill-prepared, poorly executed and institutionally damaging.

Here is the full letter, broken down into five thematic sections.

1. A nation of laws, not a dictatorship. Yates began her letter by saying that as acting Attorney General, she had to determine how the Justice Department would defend the executive orders when it inevitably would be drawn into court challenges. She wrote:

“On January 27, 2017, the President signed an Executive Order regarding immigrants and refugees from certain Muslim-majority countries. The order has now been challenged in a number of jurisdictions. As the Acting Attorney General, it is my ultimate responsibility to determine the position of the Department of Justice in these actions.”

2. A moral compass, not a rubber stamp. The White House, which issued a scathing statement on Monday night accusing Yates of betrayal, said that the executive order had been reviewed by the Office of Legal Counsel (OLC), which was the same office that approved the use of torture technique by the George W. Bush administration after the 9/11 attacks of 2001. Yates said that her responsibility was larger, which is to say that OLC opinions often create narrow justifications that are politically expedient. She wrote:

“My role is different from that of the Office of Legal Counsel (OLC), which, through administrations of both parties, has reviewed Executive Orders for form and legality before they are issued. OLC’s review is limited to the narrow question of whether, in OLC’s view, a proposed Executive Order is lawful on its face and properly drafted.”

3. The order did not come in a vacuum. Here Yates began to lay out how Trump’s campaign rhetoric, calling for a ban on refugees and visitors from Muslim counties, his administration’s later declarations that the orders were not a Muslim ban, and the 11h hour way immigration authorities were not prepared nor briefed on its implementation until after midnight Saturday, all raise political, administrative and constitutional difficulties beyond OLC’s review. She wrote:

“Its [OLC’s] review does not take account of statements made by an administration or its surrogates close in time to the issuance of an Executive Order that may bear on the order’s purpose. And importantly, it does not address whether any policy choice embodied in an Executive Order is wise or just. Similarly, in litigation, DOJ Civil Division lawyers are charged with advancing reasonable legal arguments that can be made supporting an Executive Order.”

4. Upholding the Constitution, not trashing it. Yates continues and says that her role, as the acting Attorney general, is to ensure that the Justice Department does what its career lawyers are sworn to do—defend and uphold the Constitution based on established legal precedents. The immigration orders didn’t meet that legal standard, nor did they fall within what she said was the Justice Department’s historic role—at least in the past 50 years—of upholding civil rights laws and protecting minorities. She explained:

“But my role as leader of this institution is different and broader. My responsibility is to ensure that the position of the Department of Justice is not only legally defensible, but is informed by our best view of what the law is after consideration of all the facts. In addition, I am responsible for ensuring that the positions we take in court remain consistent with this institution’s solemn obligation to always seek justice and stand for what is right. At present, I am not convinced that the defense of the Executive Order is consistent with these responsibilities nor am I convinced that the Executive Order is lawful.”

5. Defying the President, leading to her firing. Yates directly challenged Trump’s executive order by concluding that the immigration policies failed to meet basic constitutional and moral tests, and then said that she would not assign any federal attorney to show up in court to defend them when challenged by lawsuits—as civil rights attorneys started doing this weekend. When the government doesn’t respond to a lawsuit in court, those who are suing automatically win. She wrote:

“Consequently, for as long as I am the Acting Attorney General, the Department of Justice will not present arguments in defense of the Executive Order, unless and until I become convinced that it is appropriate to do so.”

Yates surely knew that her clear-eyed defiance would lead to her firing. She was only going to be acting attorney general for a short while, anyway, as the Senate was moving ahead with the president’s nomination of Sen. Jeff Sessions, R-AL. But instead of resigning in protest, she took a stand on behalf of all government attorneys who have dedicated their lives to defending civil rights, voting rights, the rights of minorities and defensible constitutional processes.
Steven Rosenfeld covers national political issues for AlterNet, including America’s democracy and voting rights. He is the author of several books on elections and co-author of “Who Controls Our Schools: How Billionaire-Sponsored Privization is Destroying Democracy and the Charter School Industry” (AlterNet eBook, 2016).