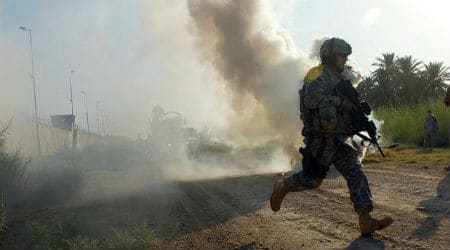 by Robert Fisk
The Independent / Counterpunch

Syria’s army and Hezbollah and Iranian allies are preparing for a massive invasion by thousands of Isis fighters who will be driven out of Iraq when Mosul falls. The real purpose behind the much-trumpeted US-planned “liberation” of the Iraqi city, the Syrian military suspect, is to swamp Syria with the hordes of Isis fighters who will flee their Iraqi capital in favour of their “mini-capital” of Raqqa inside Syria itself.

For weeks now, Western media and the American experts it likes to quote have been predicting a Stalingrad-style battle to the death by Isis inside Mosul – or a swift victory over Isis followed by inter-sectarian Iraqi battles for the city. The UN is warning of massive refugee columns streaming from a besieged city. But the Syrians – after witnessing the sudden collapse and evacuation of Palmyra when their own army retook the ancient Syrian city earlier this year – suspect that Isis will simply abandon Mosul and try to reach safety in the areas of Syria which it still controls.

Already, Syrian army intelligence has heard disturbing reports of a demand by Isis in towns and villages south of Hasaka – a Syrian city held by regime forces and Kurds in the north of the country – for new electricity and water supplies to be installed for an influx of Isis fighters from Mosul. In other words, if Mosul falls, the entire Isis caliphate army could be directed against the Assad government and its allies – a scenario which might cause some satisfaction in Washington. When the Iraqi city of Fallujah fell to Iraqi army and militia forces earlier this year, many Isis fighters fled at once to Syria.

Sayed Hassan Nasrallah, the Hezbollah leader who sent thousands of his men to fight (and die) in the struggle against Isis and Jabhat al-Nusra in Syria, said in a speech marking the Ashura commemorations last week that the Americans “intend to repeat the Fallujah plot when they opened a way for Isis to escape towards eastern Syria” and warned that “the same deceitful plan may be carried out in Mosul.” In other words, an Isis defeat in Mosul would encourage Isis to head west to try to defeat the Assad regime in Syria.

These suspicions have scarcely been allayed by a series of comments from American generals and US military sources over the past few weeks. The newly appointed US commander in the region, Lt Gen Stephen Townsend – heading what the US has presumptiously called ‘Operation Inherent Resolve’ – has said that not only Mosul but the Syrian city of Raqqa would be captured “on my watch”. But who exactly does he think will capture Raqqa? The Syrian army still intends to fight on to Raqqa from its base on the the Damascus-Aleppo military road west of the city after an attempt earlier this year which was abandoned for political rather than military reasons. Russia apparently preferred to concentrate its firepower on other militias, especially Nusra/al-Qaeda, which both Moscow and Damascus now regard as being far more dangerous than Isis.

Both have noticed how Nusra – which changed its name to Jabhat Fateh al-Sham, the “Support Front for the People of the Levant”, in the hope of escaping its al-Qaeda roots – is increasingly referred to by both Western politicians and journalists as “the rebels”, along with a plethora of other militia outfits fighting the Syrian regime. An unidentified US general was quoted last month expressing his concern that Iraqi Shia forces might seize the town of Tal Afar on the Iraqi-Syrian border in order to trap Isis fighters inside Iraq – and thus prevent their flight into Syria. Isis itself is reported to have abandoned Tal Afar several days ago.

The US-based Military Times online magazine (which, as the saying goes, is “close” to the Pentagon) has argued that General Townsend, who has a mere 5,000 US troops on the ground in both Iraq and the far north of Syria, must “pursue Isis into Syria, where the US has few allies on the ground” – which is quite an understatement – while Townsend himself is talking of “a long, difficult fight” for Mosul. He has also referred to a “siege” of Mosul. These are the dire predictions in which the Syrians do not believe

Assad’s own army, with its 65,000 fatalities in a battle that has now lasted five years, has already been bombed by the Americans at Deir Ezzor at a cost of at least 60 dead – Washington described this as a mistake – and is now preparing to challenge the huge influx of Isis fighters which could cross the border after the collapse of Mosul. Nasrallah himself made an intriguing allusion to this in his speech. He suggested that if Isis forces are not defeated by the Iraqis themselves in Mosul then the Iraqis – presumably the Iraqi Shia militia which are one of the spearheads of the government army – “will be obliged to move to eastern Syria in order to fight the terrorist group”.

Given the possibility that Syrian troops and their Russian allies may have to confront this same group, it’s little wonder that they are trying to conclude their capture of eastern Aleppo – whatever the cost in lives – before the fall of Mosul.