Posted on May 24, 2016 Posted By: TD Daniell Categories: Current News 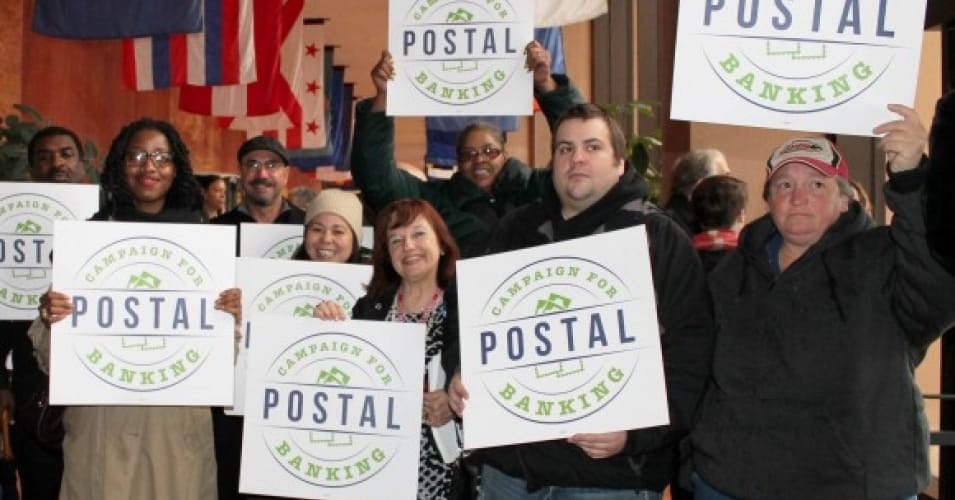 Members of the Campaign for Postal Banking delivered more than 150,000 signatures on a petition to the U.S. Postal Service headquarters in December 2015. (Photo via Inequality.org)

We’ve heard a lot about Wall Street reform in this presidential primary season. Most of the attention has been on the need to break up the “too big to fail” banks, curbing short-term speculation, and reining in executive bonuses.

For many, traditional banks are out of reach geographically. Bank deserts exist in both rural and urban areas. One reason is that banks are abandoning low-income communities. Since 2008, 93 percent of bank closings have been in neighborhoods with a median income below the national average.

Surviving outside the financial mainstream is expensive. The banks outside this mainstream don’t develop products for the underserved. Instead, their services are increasingly expensive. Overdraft fees have increased 32 percent since 2010 at the nation’s 12 largest banks. These types of fees, and requirements such as a minimum balance to open an account, keep underserved consumers away from traditional banks.

Surviving outside the financial mainstream is expensive.

So, if there is no bank in your community or it’s too expensive, where do you go? Unfortunately, a growing industry has flooded these communities with products, services and practices that are expensive and often predatory, trapping many in a cycle of debt. Payday loans, for example, have typical interest rates of 391 percent. There are approximately 22,000 payday loan stores in this country – that’s more than Wal-Mart and Starbucks combined.

Each year, the average underserved household spends $2,412 – nearly 10 percent of gross income – in fees and interest for non-bank financial services. These transactions might include a payday or car title loan, cashing a paycheck, or simply accessing Social Security benefits. As United for a Fair Economy puts it, “Each year, over $103 billion is stripped from these people and their communities and ends up in the hands of Wall Street. For the underserved, there is little opportunity to create a credit history, have access to affordable, safe and sustainable financial services, or build assets over time.”

Is there an alternative? What if a trusted, accessible, and non-profit institution (that receives no tax dollars for operating expenses) with the world’s largest retail network (31,000 branches serving every urban, suburban, and rural community in the country) existed that could help fill this void?

And many of those post offices are located in bank deserts. Fifty-nine percent of post offices are in zip codes with either zero banks (38 percent) or only one bank branch (21 percent). The Postal Service is geographically well-positioned to reach people with little-to-no access to retail banking services.

The U.S. Postal Service already offers some financial services and it wouldn’t require legislation to expand them. Its workforce is trained and certified to handle financial transactions including the sale of money orders, international money transfers, and cashing of treasury checks. The United States had a successful Postal Savings System from 1911-1967. And worldwide, 1.5 billion people receive some financial services through their postal service.

The Postal Service is not in business to make a profit for shareholders. Its purpose is to serve the public.

The USPS consistently ranks highest among all federal agencies with more than 70 percent of those polled saying it does an excellent or good job. And millennials love the USPS the most. According to a November 2014 Gallup poll, the age group that ranks the USPS highest is 18-29 year-olds, at 81 percent.

The Postal Service is not in business to make a profit for shareholders. Its purpose is to serve the public. This is in stark contrast to the predatory practices associated with alternative financial services such as payday lending or the high fees of many traditional banks.

Postal banking alone will not be enough to restore the financial sector to its proper role of serving the real economy. We need a broader agenda that also includes breaking up the biggest banks, taxing short-term speculation to encourage longer-term investment, and ending the Wall Street bonus culture that encouraged the reckless behavior that caused the financial crisis.

But by harnessing the postal system’s infrastructure to provide an alternative to the big banks and the predatory lenders, we can go a long way towards helping struggling families achieve financial stability.

Katherine Isaac is the Coordinator of the Campaign for Postal Banking.