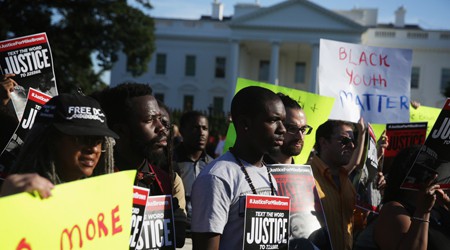 It has been one week since a St. Louis County grand jury failed to indict Officer Darren Wilson for shooting Michal Brown, an unarmed teenager, six times in the head, chest and arms. Communities nationwide have responded to the miscarriage of justice by carrying out more than 150 sustained, coordinated and intense protest actions that show no signs of letting up. Primarily led by young people of color, the continued sit-ins, highway shutdowns and walkouts have commanded the White House’s attention.

Today President Barack Obama, Vice President Joe Biden and Attorney General Eric Holder met with seven Black and Latino organizers – from Ferguson, Mo.; Columbus, Ohio; Miami, Florida; and New York City – who have been leading some of the ongoing actions to disrupt a status quo that is intolerable.

“The president requested this meeting because this is a movement that cannot be ignored,” said Ashley Yates, a co-founder of the St. Louis-based organization, Millennial Activists United. “We have two sets of laws in America – one for young Black and Brown people, and one for the police. We are sick and tired of our lives not mattering, and our organized movement will not relent until we see justice.”

The young leaders conveyed the experience of a traumatized community in Ferguson, where police have terrorized peaceful protesters with pointed guns, rubber bullets, chemical agents, bean bags and menacing threats. They further discussed the routine harassment and violence that many police departments inflict on countless communities of color across America, and their demands for the federal government to hold police departments that use excessive force accountable.

“We attended this meeting to make it clear to President Obama that we are in crisis, and police officers must be held accountable,” said Rasheen Aldridge, director of Young Activists United St. Louis. “It is a crisis when a Black American can get locked up for traffic fines, but police officers are rarely prosecuted for killing unarmed children. Black communities have suffered under racially biased policing and unconstitutional law enforcement policies for far too long. This has to stop.”

Among other avenues for change, the group’s demands include:

“In previous remarks, the president has used language that criminalizes our movement, lumping in the vast majority of peaceful protesters with violence and bad actors,” said Brittany Packnett, a St. Louis educator and activist. “In our meeting, we explained that most violence in our community is coming from the police department, and something needs to be done about it.”

“As young people of color who are often criminalized for our mere existence, we are the experts in how our communities are treated by law enforcement,” said Phillip Agnew, executive director of the Florida-based organization, the Dream Defenders. “We accepted the president’s invitation so that we could present our expertise and needed policy changes to the nation’s top leader.”

“Today we presented great models for policing alternatives,” said Jose Lopez, lead organizer for Make the Road New York. “These include restorative justice programs that promote alternatives to incarceration – work that the federal government should be investing in, instead of funding the further militarization of police who often patrol our streets like commandos in a war zone.”

“If police departments are not committed to community input and oversight, and refuse to train officers appropriately, they should be completely defunded,” said St. Louis-based hip-hop artist T-Dubb-O. “Funding body cameras and other tactics to review police actions is a start, but that doesn’t solve the problem of too many officers who see us as ‘demons’ and not members of a community. Until we deal with that, we can’t move forward.”

“We appreciate that the president wanted to meet with us, but now he must deliver with meaningful policy,” said James Hayes, political director for the Ohio Students Association. “We are calling on everyone who believes that Black lives matter to continue taking to the streets until we get real change for our communities.”