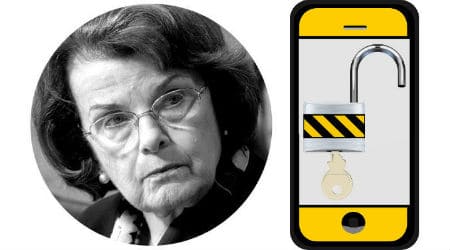 By Peninsula Peace and Justice Center

A draft of new legislation co-written by California Sen. Dianne Feinstein is circulating on Capitol Hill and in Silicon Valley, drawing howls of protest. Titled “The Compliance with Court Orders Act (CCOA)”, Feinstein’s bill (co-written with Republican Richard Burr) would essentially outlaw encryption on any kind of device, undermine privacy rights of all Americans, force websites and app stores to censor applications, and undermine the competitiveness of US tech companies.
Dozens of nonprofit organizations, companies, and academics sent a joint letter to President Obama urging him to reject this legislation.
It is beyond dispute that this bill would threaten the safety of billions of internet users, including journalists, activists, and ordinary people exercising their right to free expression, as well as critical infrastructure systems and government databases. However, it would likely to do very little to assist in investigations of crime or terrorism, since those who engage in illegal activities will have access to other means to protect their own devices and communications. (Full letter here)
Action: Send an email to Sen. Feinstein to strongly urge her to give up her relentless pursuit of legislation that undermines our safety and privacy. It is important that she hear from her constituents. In addition, sign the petition being circulated by CREDO to tell Congress to stop CCOA now.
*Kevin Bankston, Director of New America’s Open Technology Institute
Share This