Fear and Learning in Kabul 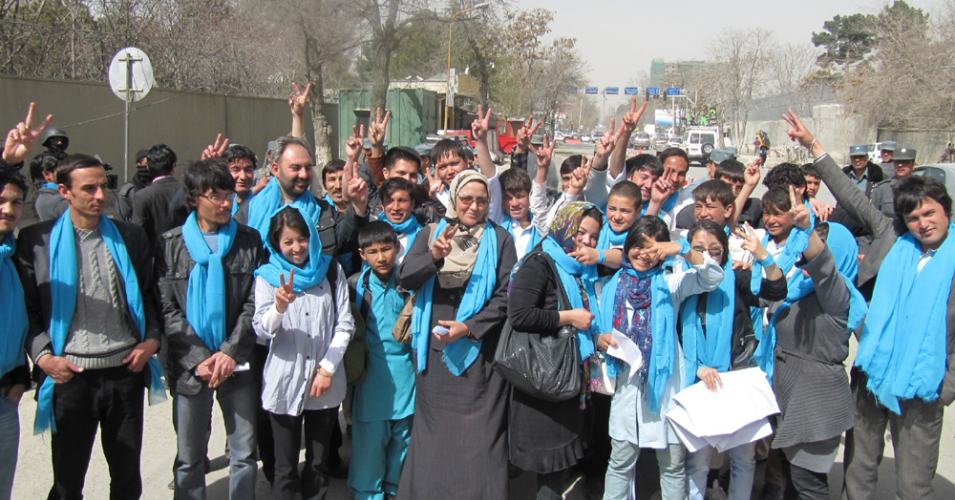 A peace walk led by ‘Our Journey to Smile’ and supported by members of Afghan Peace Volunteers and Creative Voices for Nonviolence in Kabul in 2011, expressing desire to live without wars. (Photo: VCNC)

Kabul—I’ve spent a wonderfully calm morning here in Kabul, listening to bird songs and to the call and response between mothers and their children in neighboring homes as families awaken and prepare their children for school. Maya Evans and I arrived here yesterday, and  are just settling into the community quarters of our young hosts, The Afghan Peace Volunteers (APVs).  Last night, they told us about the jarring and frightening events that marked the past few months of their lives in Kabul.

They described how they felt when bomb explosions, nearby, awakened them on several mornings.  Some said they’d felt almost shell-shocked themselves discovering one recent day that thieves had ransacked their home.   They shared their intense feelings of alarm at a notorious warlord’s statement condemning a human rights demonstration in which several community members had participated. And their horror when a few weeks later, in Kabul, a young woman, an Islamic scholar named  Farkhunda, was falsely accused in a street argument of desecrating the Koran, after which, to the roared approval of a frenzied mob of perhaps two thousand men, members of the crowd, with apparent police collusion, beat her to death.   Our young friends quietly sort through their emotions in the face of inescapable and often overwhelming violence.

I thought about how to incorporate their stories into a course I’ve been preparing for aninternational online school that intends to help raise consciousness among people, across borders and share the results.  I hope the school will help develop movements  dedicated to simple living, radical sharing, service and, for many, nonviolent direct action on behalf of ending wars and injustices.

Essentially, when Voices members go to Kabul, our “work” is to listen to and learn from our hosts and take back their stories of war to the relatively peaceful lands whose actions had brought that war down upon them. Before we’d even departed, the news from Afghanistan was already quite grim.  Several dozen people dead in fighting between armed groups.  A Kabul hotel attack on international businessmen the week before.  We earnestly wrote our friends with a  last minute offer to stay away, in hopes that we wouldn’t make them targets of the violence.  “Please come,” our friends wrote us.  So we’re here.

The western presence in Afghanistan has already caused incalculable destruction, suffering and loss.  A recently released Physicians for Social Responsibility  calculated that since 2001 in Iraq and Afghanistan, U.S. wars have killed at least 1.3 million and quite possibly more than 2 million civilians.

The report chides U.S. political elites for attributing on-going violence in Afghanistan and Iraq to various types of internecine conflicts “as if the resurgence and brutality of such conflicts is unrelated to the destabilization caused by decades of military intervention.”

Our young friends have survived the ravages of war, and each of them struggles with trauma, as their parents and grandparents have before them.  When we have gone with them to visit refugee camps outside of Kabul, several have told of their own experiences as children, running away when their villages were attacked or occupied.  We learn from them about the sorrows their mothers endured when there wasn’t enough food to feed the family or fuel to carry them through heartless winters: when they themselves nearly died from hypothermia.  Several of our young friends experience terrifying flashbacks when they hear accounts in the news of Afghans killed by missiles or gunfire within the horrified sight of their own family members and loved ones.  They tremble and sometimes cry, recalling similar experiences from their own lives.

The story of Afghanistan in Western accounts is that Afghanistan cannot deal with its traumas, however much we try, with our bullets,  bases and  token schools and clinics, to help.  Yet these young people steadfastly respond to their own traumas not by seeking revenge but by  finding ways to help people in Kabul whose circumstances are worse than theirs, particularly 750,000 Afghans living, with their children, in squalid refugee camps.

The APVs are running an alternative school for street kids in Kabul.  Little  children who are the main breadwinners for their families find no time to learn basic math or “the alphabet” when spending  more than eight hours daily working in the streets of Kabul.  Some are vendors, some polish shoes, and some carry scales along roadways so that people can weigh themselves.  In an economy collapsing under the weight of war and corruption, their hard earned income barely buys enough food for their families.

Children of the poorest families in Kabul will have better chances in life if they become literate. Never mind rising school enrollment figures often cited by the U.S. military as the benefits of occupation. The March 2015 CIA World Fact Book reports that  17.6 % of females over age 14 are literate; overall, in the teen and adult population only 31.7%  can read or write.

After getting to know about 20 families whose children work in the streets, the APVs devised a plan through which each family receives a monthly sack of rice and  large container of oil to offset the family’s financial loss for sending their children to informal classes at the APV center and preparing to enroll them in school. Through continued outreach among  Afghanistan’s troubled ethnicities, APV members now include 80 children in the school and hope to serve 100 children soon.

Every Friday, the children pour into the center’s courtyard and immediately line up to wash their feet and hands and brush their teeth at a communal faucet.  Then they scramble up the stairs to their brightly decorated classroom and readily settle down when their teachers start the lessons.  Three extraordinary young teachers, Zarghuna, Hadisa, and Farzana, feel encouraged now because many of the thirty-one street kids who were in the school last year learned to read and write fluently within nine months. Their experimentation with different teaching methods, including individualized learning, is paying off—unlike  government school systems where many seventh graders are unable to read.

While leading a demonstration of street children, Zekerullah, who was once a street kid himself, was asked if he felt any fears.  Zekerullah said that he feared that the children would be harmed if a bomb exploded.  But his greater fear was that impoverishment would afflict them throughout their lives.

That message of courage and compassion will not—and cannot—always prevail.  But if we take note of it, and even more, if, learning from its example, we take action to exemplify it ourselves, then it offers us a path out of childish fear, out of panicked collusion in war, and out, perhaps, of war’s mad grip.   We ourselves arrive in a notably better world when we determine to build it for others.   Our own education, our own victory over fear, and our own arrival as equals in an adult world, can begin or begin again—now.

So let us begin.

This article was first published on Telesur English