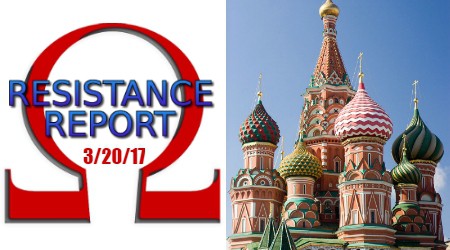 The House Intelligence Committee held its first open hearing into possible Russian interference in the 2016 elections, possible Trump campaign collusion with the Russians and Trump’s improbable tweets about Obama wiretapping him. Republicans on the committee seemed to be more concerned with whether the New York Times and Washington Post could be prosecuted for reporting on what they’re holding hearings about. Alice reports from down in the rabbit hole …

Evan Osnos, The New Yorker: The Trump campaign has been under investigation since July

A few hours before the House Intelligence Committee convened its first public hearing on Russian involvement in the U.S. election, President Donald J. Trump asserted once more that the issue was nothing more than an elaborate political distraction. “This story is FAKE NEWS and everyone knows it!” he tweeted. Less than forty minutes into the hearing, James Comey, the director of the F.B.I., provided the latest official confirmation that the “Russian story” is not “FAKE NEWS.” It is, rather, the most serious legal scandal to confront a sitting President in nearly two decades.

Trump’s tweets were blown out of the water at the start of the hearing. Mike Rogers, the head of the National Security Agency, said the intelligence community still stands behind its conclusion that Moscow pulled off the hacks and the leaks in part to assist Trump. Then Comey dropped a bombshell: He confirmed that the FBI was investigating the Russian hacking and contacts between Trump associates and Russia.

The White House was knocked on the defensive Monday ahead of its biggest week yet on Capitol Hill as FBI Director James Comey confirmed the existence of an active investigation into Russia’s meddling in the presidential election, including whether there was any coordination with now-President Donald Trump’s team.FBI’s Trump-Russia probe knocks White House on its heels.

Julian Borger, The Guardian: What we learned from the hearing on the Trump campaign’s Russia ties

Democrats…remain outraged that the Clinton email inquiry was characterised by regular leaks and public pronouncements, including one by Comey 11 days before the election that new material had been found. On the other hand, Comey’s confirmation of an extraordinary inquiry into collusion has only come more than four months after the election and nearly two months after Trump took office.