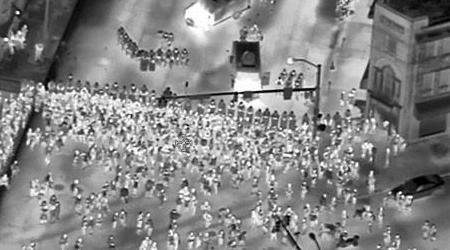 [Ed. Note: PPJC is organizing a community about the use of surveillance technology by local police agencies: Surveillance is a Local Issue, Sept. 6]

In response to an ACLU Freedom of Information Act request, the FBI has released more than 18 hours of video from surveillance cameras installed on FBI aircraft that flew over Baltimore in the days after the death of Freddie Gray in police custody in 2015. The videos, which were released to the ACLU before being posted online by the FBI this week, offer a rare and comprehensive view of the workings of a government surveillance operation. While the release of the footage addresses some questions, it leaves others unanswered.

Last year, the ACLU obtained records from the FBI showing that the agency had flown at least 10 surveillance flights over Baltimore from April 29 through May 3, 2015, when the streets of the city were filled with people protesting and mourning Freddie Gray’s death just days before.

Records from the Federal Aviation Administration showed that the FBI’s aircraft, which were registered to front companies to conceal their ownership, carried sophisticated camera systems on board, complete with night-vision capabilities. FBI evidence logsshowed that the agency had retained copies of surveillance videos and perhaps other electronic surveillance information from the flights, but the agency initially declined to release the actual videos. To its credit, the FBI reconsidered, and the footage is now a part of the public record.

We have been able to review most of the footage. Here are some of the most significant questions and observations we have after viewing it.

1. What was the FBI watching and why? 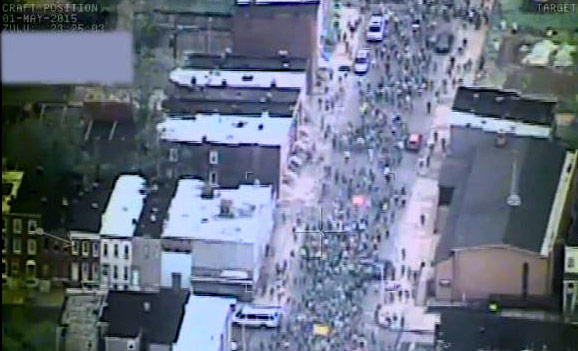 The FBI’s cameras captured hours of protests, from major marches and rallies on city thoroughfares and public squares, to smaller gatherings on sidewalks and in neighborhood intersections. At times, the cameras followed individual people walking or cars driving through the city. There are undoubtedly situations where aerial surveillance by law enforcement is appropriate, but there should be protections against mass surveillance of people engaged in First Amendment-protected protests and gatherings. At a time when the Movement for Black Lives is urgently mobilizing across the country, community members and activists shouldn’t have to worry that the government eyes in the sky will be capturing images of everything they do during a protest.

The FBI’s planes weren’t flying low; when zoomed out, their cameras captured large swaths of the city at once. But the cameras’ magnification capability is strong, and they frequently focused on a single intersection, followed a single car, or tracked the movements of small groups of people on the streets. Because the planes were so high in the sky, they probably escaped the notice of most people on the ground. But the cameras on board could quickly pan from one spot to another, even toggling between street corners in different neighborhoods. The cameras could also switch instantly to infrared mode, allowing high-resolution nighttime recording. The infrared video does not appear to have captured information about people inside of buildings, but it did clearly capture people and cars moving around in public spaces.

3. What happens to the footage? 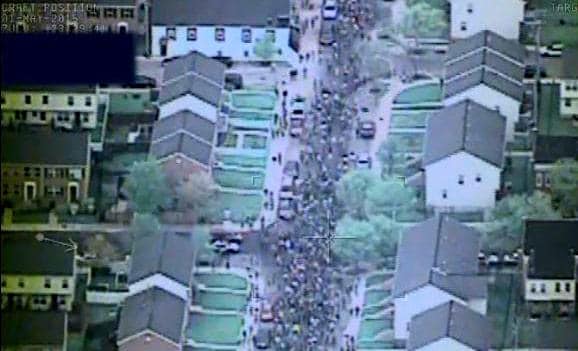 The FBI has retained (and now released) what it says is the “Complete collection of aerial surveillance footage of Baltimore protests from April 29, 2015 to May 3, 2015.” What are the retention rules for these videos? And are there limits on FBI agents revisiting them in the future, as part of specific investigations or just at their whim? The videos show people engaged in First Amendment-protected activities, people entering and exiting homes and other buildings, images of private back yards and roof decks, and other similar scenes and spaces. The videos sometimes track individual drivers as they traverse city streets.

This footage can reveal a great deal of potentially sensitive information. Moreover, these videos are just the tip of the iceberg. A recent BuzzFeed News investigation tracked more than four months of FBI and Department of Homeland Security surveillance flights, identifying nearly 2,000 flights by FBI aircraft alone. The camera footage from those flights adds up fast, and could create a detailed catalogue of people’s activities in cities across the country. This quantity of surveillance requires strong controls.

4. Whose drones are those? 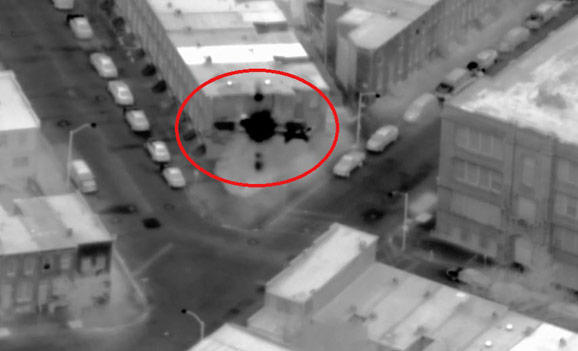 The FBI videos come from traditional aircraft, with pilots and other law enforcement personnel on board. But, incredibly, on numerous occasions, the videos capture small drones flying over the streets of Baltimore. At one point, the frame zooms out to reveal what appear to be three drones simultaneously flying over one Baltimore neighborhood. Most of the drones are captured on infrared camera feeds, obscuring some of their details, but they appear to be a mix of quad-rotor and helicopter-style devices. Because drones generally fly relatively close to the ground, the potential for privacy violations can be even greater than with video captured from traditional aircraft.

Who was flying these drones? Baltimore Police? Curious city residents? Journalists? What were they looking for? And were the flights legal? FAA rules require drones to remain within the line of sight of the operator, and to fly at relatively low altitude. 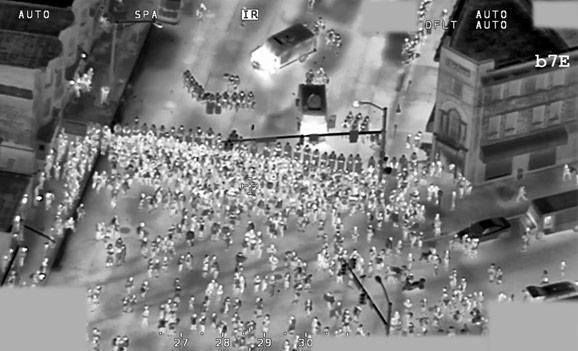 The FBI’s videos show a lot, but the magnification isn’t enough to identify individual faces. Existing and developing technologies raise concerns about even greater invasions of privacy. An aircraft-mounted surveillance camera with higher magnification or greater resolution, coupled with facial recognition technology, would give the government the power to easily identify and follow any protester or pedestrian. More sensitive infrared and thermal sensing technology can see through the walls of houses, apartment buildings, and other private spaces. Electronic surveillance devices like Stingrays can vacuum up data about many people’s cell phones at once (and have already been used aboard surveillance planes). Automated license plate readers, through-the-wall radar arrays, and other gear give additional cause for concern.

Strong controls should be placed on these surveillance flights now, to ensure that developments in technology don’t outpace the protections that are in place. We must be wary of encroaching surveillance that can chill protesters from exercising their First Amendment rights and violate the privacy of innocent people on the ground.

[Note: Although these videos are within the scope of our FOIA request, we did not specifically ask for them and were surprised to receive them. Upon receipt, our plan had been to review the videos, and to make public the portions of them in which the public interest in disclosure outweighed any privacy concerns. Before we could do so, however, the FBI posted all of the footage online.]

Naomi Dwork is a Speech, Privacy & Technology Undergraduate Intern with the ACLU