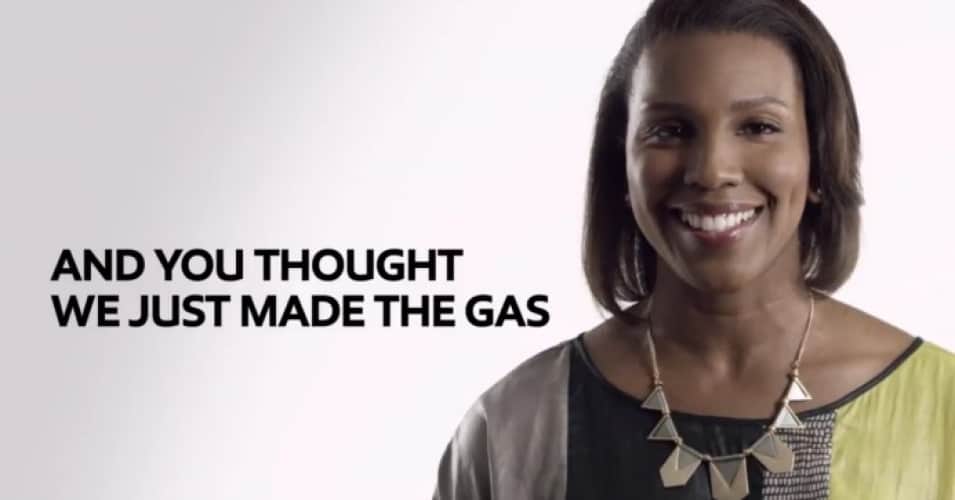 ExxonMobil wants you to know that it has a long “to-do” list.

In an ad it debuted during the opening ceremonies of the Olympics on Friday night, the world’s largest oil company presented itself as nothing more than a merry band of do-gooders who were “mapping the oceans,” “turning algae into biofuel,” and “defeating malaria.”

“And you thought we just made the gas,” joked a woman at the end, giving us a knowing smile.

And you thought we just made the gas. #EnergyLivesHere pic.twitter.com/4328aORwot

By now we’ve learned that Exxon does a lot more than make the gas: they make a lot of hot air, as well. Thanks to an expose last fall by journalists at InsideClimate News and the Los Angeles Times, we learned that as early as the 1970s, Exxon scientists had concluded that the continued use of their product, fossil fuels, would have a devastating impact on the climate.

Instead of warning the public — say, by buying an ad during the Olympics — company executives buried the results and pumped millions of dollars into misleading the public about global warming while lobbying against political efforts to deal with the problem.

Exxon didn’t admit what they knew about global warming because addressing the crisis would require them to change their core business: drilling for more oil and gas. Exxon was a fossil fuel company, full stop, and despite any fancy advertising, that’s exactly what they are today. At their 2015 shareholder meeting, Exxon CEO Rex Tillerson famously batted down shareholder requests to diversify the company’s portfolio to include renewable energy, saying simply, “We choose not to lose money on purpose.” (Exxon then went on topost its lowest profits in years as oil prices plummeted). This year, the company defeated similar shareholder resolutions urging them to move away from fossil fuels or even just report on the company’s climate impact.

None of this has stopped Exxon from pretending it’s really just a philanthropic entity with a little oil business on the side. It’s a textbook move of corporate greenwashing, just like BP renaming itself “Beyond Petroleum” or Chevron touting their efforts in energy efficiency.

With Exxon under investigation by multiple state Attorneys General for potentially lying about climate change, it’s no wonder they’re investing so heavily in advertising.

“Having a prominent corporate responsibility message helps you defend against people who are attacking you in the court of public opinion,” a marketing consultant told the New York Times back in 2009, when oil companies were rushing to improve their image around the Copenhagen climate talks. “Companies realize the court of public opinion is very important to them. They need in a sense to project their virtues.”

Those virtues are often grossly overstated. While it’s laudable that Exxon puts millions into fighting malaria, for instance, the money is fractions-of-pennies on the dollar when it comes to the amount they’re spending on searching for more fossil fuels. And in the long run, it’s those fossil fuels that may have the larger impact on the disease: numerous studies have shown that unchecked climate change will expand the range of mosquito born diseases and other health disasters.

Exxon deserves some credit for its good deeds, but those few acts of altruism don’t outweigh the company’s crimes. We don’t give a bank robber a Get Out of Jail Free card for planting a couple daisies on his way back from the heist. We’re not going to let Exxon off the hook for producing a few nice advertisements while they continue to try and rob us of a safe climate future.

Jamie Henn is the director of communications and strategy for the international climate campaign 350.org. Follow him on Twitter @Agent350