Endless War Is Alive and… Bleeding 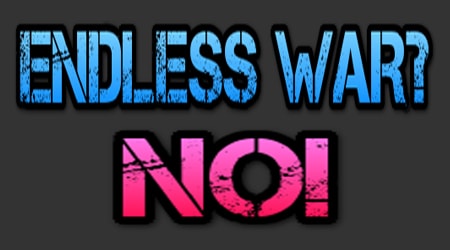 Good and evil leap from the headlines: “Egyptian planes pound ISIS in Libya in revenge for mass beheadings of Christians.”

It’s nonstop action for the American public. It’s the history of war compressed into a dozen words. It’s Fox News, but it could be just about any mainstream purveyor of current events.

Once again, I feel a cry of despair tear loose from my soul and spill into the void. Our politics are out of control. There’s no sanity left — no calmness of strategic assessment, no impulse control. At least none of that stuff is allowed into the mainstream conversation about national security, which amounts to: ISIS is bad. The more of them we (or our allies of the moment) kill, the better. USA! USA!

We’re in a state of perpetual war and have no intention of escaping it. Certainly we have no intention of critiquing our own actions or — don’t be silly — questioning the effectiveness of war, occupation or high-tech terror (think: “shock and awe”) as a means to create a stable, secure world. The interests of war have dug in for the long haul, fortified by the cynicism of the media they own. The voices of reason cry from the margins. When a trickle of sanity finds its way into the mainstream, it’s mocked until it goes away.

Thus Marie Harf, deputy State Department spokesperson, had her moment of right-wing ridicule when she said of ISIS this week, during an interview on MSNBC with Chris Matthews:

“We’re killing a lot of them, and we’re going to keep killing more of them. So are the Egyptians, so are the Jordanians — they’re in this fight with us. But we cannot win this war by killing them. We cannot kill our way out of this war. We need in the medium to longer term to go after the root causes that lead people to join these groups, whether it’s a lack of opportunity for jobs, whether . . .”

The snort of contempt began immediately, as Matthews interrupted her. It spread through the conservative media, as the Society of Media Chicken Hawks gleefully pecked her words apart, joking that she wanted to defeat ISIS with a jobs program, etc. What fun! “Can political correctness defeat terrorism?” the Wall Street Journal asked. That was it. End of discussion.

Well, no it’s not. I insist on opening it back up:

“We cannot kill our way out of this war. We need . . . to go after the root causes that lead people to join these groups . . .”

Tepid and tentative as Harf’s words were, the fact that they were either instantly mocked and dismissed as “politically correct,” or ignored completely, indicates the extent to which a war mentality has supplanted thought in the mainstream realm of the American empire. Root causes? Come on. Only one side of any war, our own, ever has root causes.

If Harf’s line of thinking were actually allowed into the discussion, before you know it, people would begin wondering what the Global War on Terror has accomplished and, indeed, the extent to which it has contributed to the root causes in question. Who is ISIS? What’s their agenda? What’s our agenda? Unavoidably, marginal voices of dissent would start being heard, such as Glenn Greenwald’s, writing this week at The Intercept:

“Since 2011, Libya has rapidly unraveled in much the way Iraq did following that invasion: swamped by militia rule, factional warfare, economic devastation, and complete lawlessness. And to their eternal shame, most self-proclaimed ‘humanitarians’ who advocated the Libya intervention completely ignored the country once the fun parts — the war victory dances and mocking of war opponents — were over. The feel-good ‘humanitarianism’ of war advocates, as usual, extended only to the cheering from a safe distance as bombs dropped. . . .

“Into the void of Libya’s predictable disintegration has stepped ISIS, among other groups.”

Beyond this, the national security discussion could begin to consider the nature of war and militarism: “The barbarism we condemn is the barbarism we commit,” Chris Hedges wrote recently. “The line that separates us from the Islamic State of Iraq and Syria is technological, not moral. We are those we fight.”

And the maw of uncertainty opens. The horror of the ISIS beheadings might become unbearably real to the public at large as people consider the nature of warfare itself and suddenly, my God, get it: We’re doing the same thing, but with technology a thousand times more powerful.

The “shock and awe” bombing we inflicted on Baghdad in 2003, for instance, was an act of terrorism meant to deliver “incomprehensible levels of massive destruction” and, in the process, shatter a society’s will to resist us, according to Harlan K. Ullman and James P. Wade, who described the concept in a 1996 Defense Department publication. I haven’t heard anyone talk about this bombing campaign recently, but its consequences are nonetheless alive and bleeding.

“We cannot kill our way out of this war.” Or the next one. It’s time to stop.