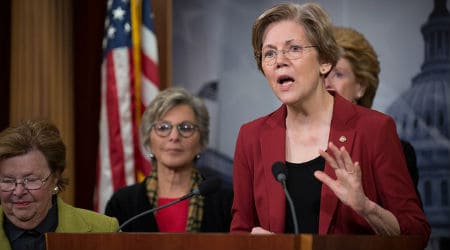 he United States is in the final stages of negotiating the Trans-Pacific Partnership (TPP), a massive free-trade agreement with Mexico, Canada, Japan, Singapore and seven other countries. Who will benefit from the TPP? American workers? Consumers? Small businesses? Taxpayers? Or the biggest multinational corporations in the world?

One strong hint is buried in the fine print of the closely guarded draft. The provision, an increasingly common feature of trade agreements, is called “Investor-State Dispute Settlement,” or ISDS. The name may sound mild, but don’t be fooled. Agreeing to ISDS in this enormous new treaty would tilt the playing field in the United States further in favor of big multinational corporations. Worse, it would undermine U.S. sovereignty.

ISDS would allow foreign companies to challenge U.S. laws – and potentially to pick up huge payouts from taxpayers – without ever stepping foot in a U.S. court. Here’s how it would work. Imagine that the United States bans a toxic chemical that is often added to gasoline because of its health and environmental consequences. If a foreign company that makes the toxic chemical opposes the law, it would normally have to challenge it in a U.S. court. But with ISDS, the company could skip the U.S. courts and go before an international panel of arbitrators. If the company won, the ruling couldn’t be challenged in U.S. courts, and the arbitration panel could require American taxpayers to cough up millions – and even billions – of dollars in damages.

If that seems shocking, buckle your seat belt. ISDS could lead to gigantic fines, but it wouldn’t employ independent judges. Instead, highly paid corporate lawyers would go back and forth between representing corporations one day and sitting in judgment the next. Maybe that makes sense in an arbitration between two corporations, but not in cases between corporations and governments. If you’re a lawyer looking to maintain or attract high-paying corporate clients, how likely are you to rule against those corporations when it’s your turn in the judge’s seat?

If the tilt toward giant corporations wasn’t clear enough, consider who would get to use this special court: only international investors, which are, by and large, big corporations. So if a Vietnamese company with U.S. operations wanted to challenge an increase in the U.S. minimum wage, it could use ISDS. But if an American labor union believed Vietnam was allowing Vietnamese companies to pay slave wages in violation of trade commitments, the union would have to make its case in the Vietnamese courts.

Why create these rigged, pseudo-courts at all? What’s so wrong with the U.S. judicial system? Nothing, actually. But after World War II, some investors worried about plunking down their money in developing countries, where the legal systems were not as dependable. They were concerned that a corporation might build a plant one day only to watch a dictator confiscate it the next. To encourage foreign investment in countries with weak legal systems, the United States and other nations began to include ISDS in trade agreements.

Those justifications don’t make sense anymore, if they ever did. Countries in the TPP are hardly emerging economies with weak legal systems. Australia and Japan have well-developed, well-respected legal systems, and multinational corporations navigate those systems every day, but ISDS would preempt their courts too. And to the extent there are countries that are riskier politically, market competition can solve the problem. Countries that respect property rights and the rule of law – such as the United States – should be more competitive, and if a company wants to invest in a country with a weak legal system, then it should buy political-risk insurance.

The use of ISDS is on the rise around the globe. From 1959 to 2002, there were fewer than 100 ISDS claims worldwide. But in 2012 alone, there were 58 cases. Recent cases include a French company that sued Egypt because Egypt raised its minimum wage, a Swedish company that sued Germany because Germany decided to phase out nuclear power after Japan’s Fukushima disaster, and a Dutch company that sued the Czech Republic because the Czechs didn’t bail out a bank that the company partially owned. U.S. corporations have also gotten in on the action: Philip Morris is trying to use ISDS to stop Uruguay from implementing new tobacco regulations intended to cut smoking rates.

ISDS advocates point out that, so far, this process hasn’t harmed the United States. And our negotiators, who refuse to share the text of the TPP publicly, assure us that it will include a bigger, better version of ISDS that will protect our ability to regulate in the public interest. But with the number of ISDS cases exploding and more and more multinational corporations headquartered abroad, it is only a matter of time before such a challenge does serious damage here. Replacing the U.S. legal system with a complex and unnecessary alternative – on the assumption that nothing could possibly go wrong – seems like a really bad idea

This isn’t a partisan issue. Conservatives who believe in U.S. sovereignty should be outraged that ISDS would shift power from American courts, whose authority is derived from our Constitution, to unaccountable international tribunals. Libertarians should be offended that ISDS effectively would offer a free taxpayer subsidy to countries with weak legal systems. And progressives should oppose ISDS because it would allow big multinationals to weaken labor and environmental rules.

Giving foreign corporations special rights to challenge our laws outside of our legal system would be a bad deal. If a final TPP agreement includes Investor-State Dispute Settlement, the only winners will be multinational corporations.