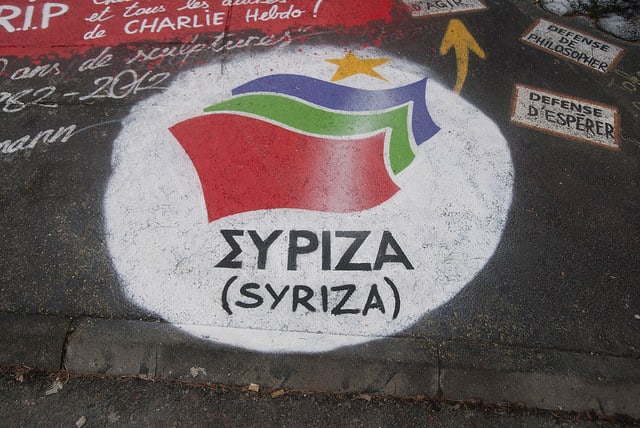 You can’t watch what is unfolding in Greece and not marvel at the clarity, fortitude and nerve of the new government there. In fact, we’re pretty sure that many progressives across North America are saying to themselves, even if just quietly, “We’d sure like to do that.”

And who wouldn’t? Syriza is standing up to the powers-that-be in European capitalism in a way that seems almost impossible to imagine in places like Canada and the United States. Greece is not these places, of course, but let’s not let ourselves off the hook that easily.

Syriza is a heterogeneous party, made up of diverse strands of the Greek left, but united by the view that the country’s ruling parties were too compromised to deliver a departure from the crushing economic conditions imposed on it. Although it didn’t initiate them, Syriza opened itself to the social movements that emerged to challenge austerity and has become their authentic political voice. Now it has taken power peacefully and formed the first European government of the radical left since the Second World War. It did what parties are supposed to do. We think it’s appropriate to be inspired.

Syriza has also been level-headed — and so must we. There are at least four preconditions for Syriza’s January electoral breakthrough that don’t exist in the U.S.: proportional representation in elections; an economic crisis of immense, social fabric-destroying proportion; a history of subjugation by foreign powers; and disciplined, determined activists raised in the radical movement. Still, there are significant lessons to learn from what is happening in the Mediterranean in America, where our organization is based, and elsewhere.

Syriza had a story to tell that rang true, and they didn’t shy away from telling it. It went like this: foreign creditors teamed up with a discredited domestic political system in order to benefit the tax-avoiding oligarchs, and together they pushed brutal, livelihood-destroying austerity measures. The story rang true to Greeks — because it was true.

There isn’t a perfect analogy to the U.S. context, but we have our own Syriza-style tight loop of a story: Wall Street, oil companies and Walmart buy political power in both major parties, which deregulate, subsidize, and under-tax so that corporate profits and executive compensation reach astronomical heights while wages stagnate, climate change goes unchecked and risks of another financial collapse pile up.

It’s a story we have to tell, too.

Lesson 2: Against the oligarchs and the “totalitarianism of the market” which serves as a cover for their interests, we, the forces of democracy, have to fight back.

Only a few benefit from the oligarchs’ policies, but they have the power and they have a grip on the political system. The oligarchs prevent the creation of a genuinely fair electoral playing field via a rigged campaign finance system and the rollback of voting rights. The oligarchs bring in cheap immigrant labour but prevent immigrants from getting citizenship. The oligarchs buy politicians. Democracy — real democracy — is a threat to them.

America gave birth to the idea of popular sovereignty, but who in America today believes that it is the people who rule? We will get policies for the rest of us when the rest of us have real political power.

Lesson 3: Inequality is objectionable, but more fundamental is articulating how people are denied the things that they need.

In Greece it was possible to argue that austerity was preventing people from getting life’s basics like living wage jobs, health care, food and electricity. We need to identify sharply what people’s needs are — and just as sharply, why those needs are being denied.

The economic crisis in America isn’t as broad or as deep as in Greece (or Spain), but it’s still very real for tens of millions of people in the U.S. And it’s not hard to take a stab at what is needed. Working people need a raise. Working people need investment in schools, transit and affordable housing. Working people and students need debt relief.

Working people can’t get these needs met, because they are shut out by a political system bought and paid for by the one per cent.

Lesson 4: Draw a link between what working people need and what society as a whole needs.

Syriza convinced even conservative Europeans that it deserved to be listened to because it was proposing policies that could credibly address a problem that many agreed on: the need to stimulate demand in Greece specifically and the Eurozone generally. We also need to demand stimulus in the U.S.

Rule by the one per cent has produced a recovery in which the income gains have gone almost entirely to the already wealthy. Many economists think that policies that would be good for workers — higher inflation, easier unionization and massive public investment, especially around climate change — would be good for all Americans. In other words, there are positions well to the left of the Democrats that can be presented as being in the public interest.

Lesson 5: Have a program. Say what you will do — don’t get dragged into debates about how you will do it.

Syriza convinced voters that it was going to take action to end austerity. Incessantly, the right, the media and the European elite tried to goad them into saying that executing their program would require leaving the Eurozone, but they never took the bait.

What enabled Alexis Tsipras to give such a defiant speech earlier this month was that his party had campaigned and won on a clear platform. Not for ideological reasons, but because the Greek people instructed him to. He has no right to bow to the demands of Greece’s creditors.

We need statements of the “we will” variety: “We will raise wages.” “We will raise $100 billion in new revenue and put it into investment in low-carbon, low-cost housing.” “We will overhaul the tax code.” “We will finally start a serious discussion of reparations.” “We will kick big money out of elections.” Running and winning on a clear platform gives elected officials a mandate to insist on those priorities.

Lesson 6: A program needs spokespeople, and it really helps when those spokespeople are or will be in government.

Alexis Tsipras and other top Syriza leaders like new finance minister Yanis Varoufakis campaigned for their party, and voters could cast a single, uncomplicated vote for the individual and the party. This is a huge challenge in the U.S. A new party in the American winner-take-all system runs smack into the rules that almost always make a third party vote “wasted” or a “spoiler.” We have too much respect for voters to suggest these two options as a credible strategy for building power, and it’s why rule changes in voting systems themselves remain an important piece of what we must accomplish.

By way of comparison, the Working Families Party in Connecticut and New York got about the same percentage of the vote in their 2014 legislative races that the left-wing Spanish Podemos party got in the European legislative elections that put them on the political map, but the U.S. system does not turn minor party votes into a percentage of a legislative body.

The Working Families Party tries to compensate for this electoral rules conundrum by running anti-one per cent challengers inside Democratic primaries, yanking and prodding the Democratic Party as a whole in a progressive direction. It requires creativity and grit, but it surely works.

To our dismay, of course, the Tea Party has proven the effectiveness of this party-within-a-party approach, shifting the terms of American political discourse in just a few short years. In a world with sane electoral rules, both the program and the politicians would belong to the party, with the party functioning as a mechanism for ensuring the politicians’ fealty to the program. The difficulty for minor parties of winning elections outright means it’s hard to attract people with the ambition to run for office. But it should not be impossible. In fact just this week Bridgeport, Connecticut voters elected the first-ever state legislator in the country solely on the Working Families line.

U.S. progressives need to recruit train, and assist real champions like Syriza’s Tsipras and Podemos’s Pablo Iglesias who will use the electoral moment to tell the truth to the broad public, and who will not be afraid to align themselves with and be accountable to both a new political party and the social movements of our time — be they focused on climate, mass incarceration, student debt, food systems, immigrant rights or any other issue.

Lesson 7: Like Greeks, Americans think that their political system is broken — and they want an alternative.

This is fundamental to Syriza’s victory. Many Greeks who would not describe themselves as being on the “radical left” and who heard all of the threats about what would happen if Syriza got elected voted for them anyway. They did so because everyone knew that Syriza owed nothing to the oligarchs. Therefore, they could credibly claim that electing them was in and of itself a direct attack on a broken political system that was itself responsible for austerity and corruption.

What would it take for other political organizations to be able to honestly say to voters, “We are the alternative?”

Again, electoral rules make this hard. The Democratic Party is not one election away from collapse, like Greece’s discredited social democratic party PASOK. But we on the left could stop acting as though it is for us to “save” a Democratic party that does not belong to us. Our task is to build our own power and our own organizations. It should be our goal to someday be strong enough that Democrats will either have to accommodate that power, or get out of the way. With a clear program, effective spokespeople, and a declared intent to change the way things are done, voters should be able to tell the difference.

Lesson 8: No mourning for the golden days.

The immediate policies that the new Greek government proposes to implement are all rollbacks of “reforms” that were forced on them by their creditors. That could have been presented as going back to some tolerable previous status quo. Instead, the new government has denounced the old as corrupt and undemocratic, saying that it intends to destroy once and for all the grip of the country’s oligarchs on power.

In the U.S., even as the “great compression” of the post-Second World War era produced steadily rising living standards for the (mostly white) middle class, it will be not enough to merely “restore the middle class.” That slogan may poll well, but the challenges we face require new thinking and a new level of political energy.

There is no going back to 1965. Young people in particular — and who can deny that the youthfulness of Syriza and Podemos is part of their appeal? — will not be moved by policies purporting to return us to an America of which no one under 45 has any living memory.

Finally, a word on Podemos. For those not paying close attention, Podemos (“We Can”) is the new left-wing party in Spain that is shaking things up there. The Spanish elections are in the fall. Spain has a much bigger economy than Greece, and so the prospect of an anti-austerity, anti-oligarchs party in power there is an even deeper challenge to the economic status quo.

No doubt Podemos will come under withering attack from what the American populists in the 1870s first named “the money power,” as the Syriza government in Greece already has. We should do what we can to support them. After all, their struggle really is our struggle.

Ted Fertik is currently working on a PhD in history at Yale Univesity. From 2008 to 2010 he was an organizer with the Working Families Party in New York and Oregon. Follow him on Twitter: @tedfertik

Dan Cantor is the National Director of the Working Families Party.