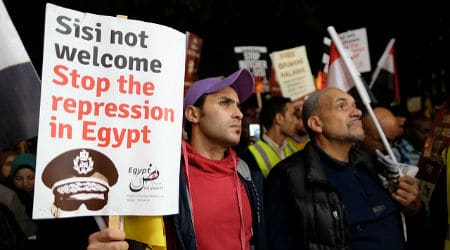 Egyptian President Abdel Fattah el-Sisi, the brutal military dictator who overthrew his country’s democratically elected president in a 2013 coup, killed more than 800 protesters in a single day, and has imprisoned tens of thousands of dissidents since he took power, was President Donald Trump’s honored guest at the White House on Monday.

Sisi has presided over the worst wave of repression in Egypt’s modern history. Tens of thousands of opposition supporters have been imprisoned. Many people have gone into exile. Torture, extrajudicial killing, forced disappearances are rampant. Journalists have been prosecuted and sentenced. Draconian laws, limiting freedom of expression, freedom of assembly, are ruthlessly enforced. And the airwaves have been purged of all dissident voices. And there’s an unprecedented crackdown on civil society that’s underway.

President Donald Trump once again dodged any public comment on Egyptian President Abdel Fattah el-Sisi’s much-maligned human rights record after their meeting Monday, even as several U.S. families claimed the White House has ignored their pleas to intervene in the cases of at least three wrongfully imprisoned Americans.

Mythili Sampathkumar and Samuel Osborne, The Independent: Donald Trump says he is ‘very much behind’ authoritarian Egyptian President Sisi

Tens of thousands of political dissidents, including American citizens and human rights advocates, remain in Egyptian jails today due to Mr Sisi’s policies, according to Human Rights Watch.

Mr Trump however, called Mr Sisi a “fantastic guy” when the two had met last September in New York during Mr Trump’s 2016 presidential campaign in an effort to boost the then-candidate’s scant foreign policy credentials.