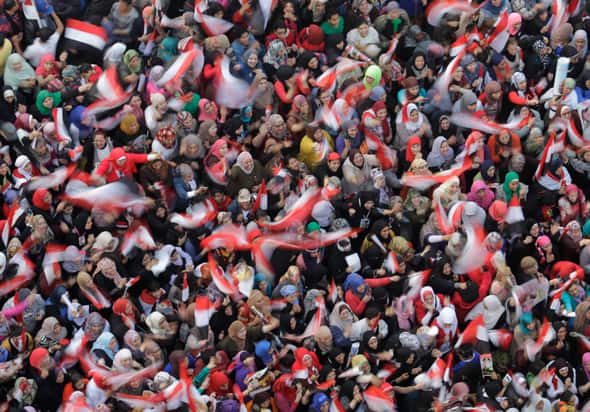 January 25 marked the third anniversary of the revolution that overthrew dictator Hosni Mubarak, and Egyptians observed it in three distinctively different ways.

In the iconic Tahrir Square downtown, thousands of supporters of the military coup of July 3, 2013, gathered for a big party. People never used to dance to patriotic songs, but now it is becoming customary. Footage at one point showed a stage with Nubian folk dancers performing in a mixed troupe that included men and a woman dancer. That performance would have been frowned on by the Muslim Brotherhood government that was in power a year ago, and which had pressured Cairo’s five star hotels to stop belly dancing performances at their night clubs. The not so subtle message was that the coup government is pushing back against the puritanical policies of the Brotherhood, which had threatened personal liberties and artistic expression (the Cairo Opera performers went on strike last spring over such issues).

Some in Tahrir are alleged to have chanted “The people want the execution of the Brotherhood,” blaming the fundamentalist organization for Friday’s bombings.

The Tahrir crowd wants Minister of Defense Abdel Fattah al-Sisi to run for president. This move is extremely problematic. Al-Sisi is likely behind many of the paranoid and horrific human rights violations of the past 7 months. He gives the impression of being both a narcissist and a sociopath, and the Arab world has had enough such leaders. Pakistan adopted a law that no military officer could serve as president unless he had been out of uniform for at least two years prior to being sworn in, and Egypt should think seriously about a similar ban.

Members of the April 6 Youth, a leftist organization key to the 2011 revolution, tried to march to Tahrir Square, but were stopped by police and some were arrested. One of their founders, Ahmad Maher, has been sentenced to 3 years hard labor for participating in an unlicensed protest last fall. They also demonstrated in Mohandiseen in west Cairo, as part of a leftist coalition called the “Revolutionary Road Front.” They reject military rule but also reject the legitimacy of the Brotherhood government of Muhammad Morsi, who was deposed last summer after massive popular demonstrations against him.

Outside Tahrir Square, in provincial towns and cities, thousands of Muslim fundamentalist protesters marked the anniversary by coming into the streets and chanting against the government. The coup government of Prime Minister Hazem Biblawi has tried to outlaw unlicensed protests. Thus, police were ordered to attack the demonstrators with tear gas and birdshot and to arrest many of them. Sometimes they appear to have used live ammunition on the crowds, accounting for at least 54 deaths.

In a return to days of journalistic shame, al-Ahram, Egypt’s newspaper of record, did not mention the deaths in its front page headline about the day’s events.

Some 176 were wounded in clashes with other protesters or with police. In addition, police made over 1000 arrests of demonstrators throughout the country, and arrested another 700 or so for possession of Molotov cocktails or firearms.

On Friday Cairo had been shaken by several bombings, one of them massive. The truck bomb targeted the Directorate of Security.

On Saturday there were two more bombings. One was at Police Academy Central in Cairo, badly injuring one man. There was another bombing, in Suez, on Saturday, which targeted the base of security police and left 16 wounded. The bombings on Friday were claimed by the shadowy Helpers of the House of Jerusalem, which is allegedly based in the lawless Sinai Peninsula and allied with Hamas in Gaza. But some Egyptian analysts say that it is a front, not a real organization, for the more militant wing of the Muslim Brotherhood.

So Egypt was three countries on Saturday. There was the praetorian Republic of al-Sisi in Tahrir, there were the leftist Revolutionary Road Front and April 6 Youth at Muhammad Mahmoud and Mohandiseen, and there was the Muslim Brotherhood in Asyut and El Minya and elsewhere in provincial depot towns. Whereas all three forces had united in February of 2011 to depose Mubarak, now the three are all opposed to one another and their exclusionary politics has brought the country to the brink of chaos.

It is a sad anniversary. But it isn’t the last anniversary, and the youth who revolted in 2011 won’t really come to political power for another 20 or 30 years. The Egyptian Millennials have different values on the whole than Baby Boomers like the fundamentalist Morsi or than Gen X figures like al-Sisi. It is unlikely that we have heard the last of those demands for personal dignity and social justice.