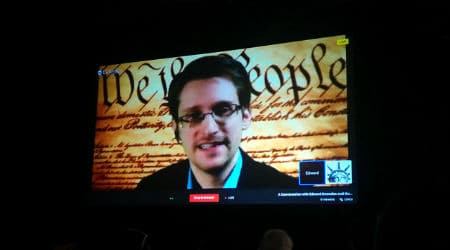 The proposed International Treaty on the Right to Privacy, Protection Against Improper Surveillance and Protection of Whistleblowers — dubbed the “Snowden Treaty” by supporters — requires that signatory states prohibit mass data collection and implement public oversight of their national surveillance programs. They would also be required to offer asylum to people who say they are whistleblowers, including those from states that are not party to the treaty.

The push for the treaty is being led by the online activist group Avaaz and civil liberties advocate David Miranda. Miranda and Avaaz campaign director Dalia Ashad announced the effort at a Thursday press conference in New York; Snowden and Greenwald appeared via teleconference from Russia and Brazil, respectively.

“This is the beginning of work that will continue for many years,” said Snowden.

Now that “we’ve established at least the bare facts of what’s going on in the arena of our basic liberties,” he said, “we need to think about what the actual proposals that we’re going to put forth will be.”

Miranda said full details of the treaty were not yet ready to release, and that a handful of governments were currently reviewing a draft and due to give feedback. He also declined to provide a list of the countries the activists had consulted with, but said some of them were likely to come forward soon.

Public pressure may inspire some other, more reticent nations to sign the treaty, he said.

But Greenwald said the Snowden Treaty has a more ambitious goal than just establishing best practices for surveillance. He highlighted the proposed treaty’s whistleblower protections as particularly significant.

“I think the critical part of this treaty is to say that whistleblowers are entitled to protection on an international level,” said Greenwald. “They shouldn’t have to rely on some sort of ad hoc desperate attempt at the last minute to avoid being put into prison for 40 years, as Edward Snowden did.”