Drones, the Media and Malala’s Message 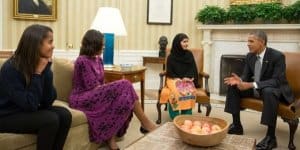 Pakistani teenager Malala Yousafzai’s visit to the United States was widely covered in the media, including interviews with ABC‘s Diane Sawyer (10/11/13), CNN’s Christiane Amanpour (10/14/13) and Jon Stewart of the Daily Show (10/8/13). She was selected as ABC‘s “Person of the Week” on October 11, and was considered a serious contender for the Nobel Peace Prize.

And for good reason; just one year ago, Malala was attacked by the Taliban for her outspoken advocacy on behalf of educational equality, surviving a an attack where she was shot in the head.

But one part of her message didn’t seem to penetrate the corporate media.

During her October 11 visit to the White House, Yousafzai told Barack Obama that his administration’s drone strikes were fueling terrorism. As McClatchy‘s Lesley Clark (10/11/13) reported:

In a statement released after the meeting, Malala said she was honored to meet with Obama, but that she told him she’s worried about the effect of US drone strikes. (The White House statement didn’t mention that part.)

“I thanked President Obama for the United States’ work in supporting education in Pakistan and Afghanistan and for Syrian refugees,” she said in the statement. “I also expressed my concerns that drone attacks are fueling terrorism. Innocent victims are killed in these acts, and they lead to resentment among the Pakistani people. If we refocus efforts on education, it will make a big impact.”

This exchange, for some reason, didn’t register in a corporate media that followed Malala’s visit, and her story, very closely.

This is in keeping with other media patterns we’ve seen. Earlier this year, Farea al-Muslimi, a Yemeni writer and activist, came to Washington to deliver moving testimony  to the Senate Judiciary Committee about the effect of drone strikes on his country: “What the violent militants had previously failed to achieve, one drone strike accomplished in an instant. There is now an intense anger against America.” His words received scant coverage in the US media (FAIR Blog, 4/24/13).

If Americans wish to understand how US wars are experienced by those on the other side of the military attacks, it is important to hear these voices. But will US media allow these voices to be heard?

Peter Hart is the activism director at FAIR (Fairness & Accuracy In Reporting). He writes for FAIR’s magazine Extra, and is also a co-host and producer of FAIR’s syndicated radio show CounterSpin. He is the author of The Oh Really? Factor: Unspinning Fox News Channel’s Bill O’Reilly” (Seven Stories Press, 2003).