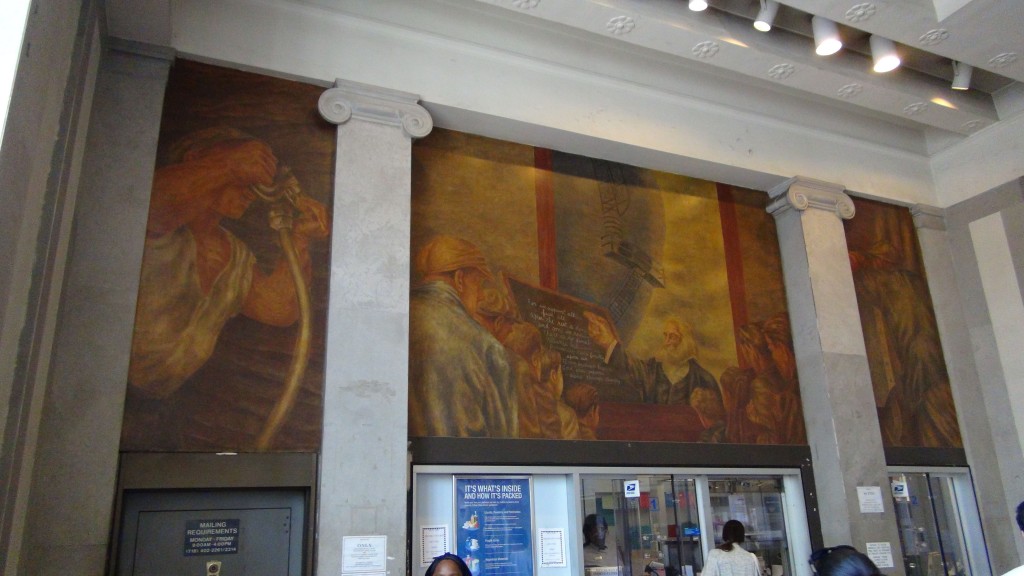 One of the many worker oriented murals in the Bronx Post Office by Ben Shawn. The words are:
For we support all, fuse all.
After the rest is done and gone we remain.
There is no final reliance but upon us.
Democracy rests finally upon us.
(I my brethren begin it)
and our visions sweep
through eternity.

The US Postal Service, I mean – the corporate hierarchy that runs this enormously popular public institution. Yes, I know that USPS has lost revenue it traditionally got from first-class mail delivery, but I also know that letter carriers and postal workers have offered many excellent ideas for expanding the services that USPS can deliver, thus increasing both revenue and the importance of maintaining these community treasures.

Yet, the Postal Board of Governors, which includes corporate interests that would profit by killing the public service, seems intent on – guess what? – killing it. The board’s only “idea” is to cut services and shut down hundreds of local post offices. Incredibly, their list of closures include the historic post office in Philadelphia’s Old City, the very building where Ben Franklin presided as our country’s first Postmaster General, appointed by the Continental Congress in 1775.

All across the country, post offices that are invaluable artistic and historic assets are slated to be sold to developers. One is the marvelous 1935 Bronx post office, with classic architectural flourishes and 13 museum-worthy murals. “It’s not just a post office,” says one customer fighting the closure, “it’s part of my life.” No one feels that way about a Fed Ex warehouse. Yet, says a USPS spokeswoman dismissively, the four-story building is “severely underused.”

So, use it! Put a coffee shop in it, a public internet facility, a library and museum, a one-stop government services center – and, as USPS employees have suggested, a public bank offering basic services to the thousands of neighborhood people ignored by commercial banks. Come on, USPS, show a little creativity and gumption, and remember that “service” is a key part of your name!

“Protest Aside, Postal Service Is Taking Next Step to Sell Grand Property in the Bronx,” The New York Times, February 5, 2014.