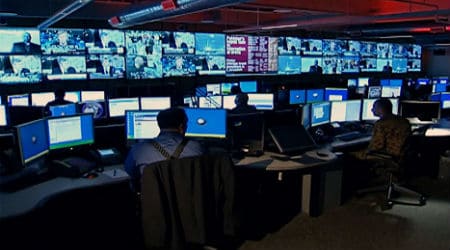 By Spencer Ackerman
The Guardian

For all the acrimony over the future contours of US domestic surveillance, a consensus has emerged: the expiring portions of the Patriot Act that do not govern the mass collection of US phone records are critical counter-terrorism tools.

The only dissent from that consensus: the Justice Department’s internal watchdog, which has found that a provision heralded by everyone from across the political spectrum to be at best marginally useful.

Yet the Washington surveillance debate, which is heading for a sort of resolution in an extraordinary Senate session on Sunday, has all but ignored last week’s groundbreaking Justice Department inspector general report on the key provision, known as Section 215.

Advocates of surveillance reform, particularly those who believe a bill called the USA Freedom Act that junks the bulk collection of US phone records does not go far enough, have been stunned and frustrated that the report has not sounded the death knell of Section 215. But while the Obama administration has already ensured the end of the National Security Agency’s bulk US phone records collection, Senate inertia may end up killing the most controversial provision of the 2001 Patriot Act.

“While there is considerable heat on eliminating the collection of bulk data, which is good, advocates need to be thinking about the back door which is still propped open under the USA Freedom Act,” said Vince Warren, executive director of the Center for Constitutional Rights. “Just about every broad power and collection methodology that we now agree is harmful and should be removed was deemed ‘necessary’ by people who pushed forward Section 215 years ago.”.

“There’s no evidence that the authorities are necessary or effective, and they have raised significant constitutional concerns,” said ACLU legislative counsel Neema Singh Giuliani.

The USA Freedom Act preserves all the non-domestic bulk phone records aspects of Section 215. That provision permits the FBI, outside of typical warrant or subpoena channels, to collect tax, medical, library, educational and other so-called “business records”. By design, the bill’s architects traded the end of bulk phone records collection for the retention of the rest of Section 215, using the leverage of Section 215’s expiration at midnight on 31 May.

But a Justice Department inspector general’s report released on Thursday confirmed that the FBI uses the Patriot Act provision to collect much more than business records. It gives the FBI “large collections” of Americans’ internet metadata, as long noted by journalist Marcy Wheeler, including the to/from lines of emails, texts, instant messages, web addresses, and probably internet protocol addresses.

The report stopped its review in the year 2009 and warned that large-scale FBI access to domestic internet metadata was growing, adding that it had outstanding questions about specific FBI policies to protect Americans’ privacy.

Yet all the controversy surrounding Section 215 has been overshadowed by that surrounding the bulk phone records collection revealed by whistleblower Edward Snowden and recently ruled illegal by a federal appeals court.

Instead, politicians on all sides of the surveillance debate have lined up to praise Section 215. Surveillance reformers in particular have been energetic in their defense of the provision, part of their gambit to ensure the end of the bulk US phone records dragnet.

Representative James Sensenbrenner, the Wisconsin Republican and an architect of both the Patriot Act and the USA Freedom Act, said on 13 May that the wholesale loss of Section 215 would “threaten our national security.” The leading Democrat on the House intelligence committee, Adam Schiff of California, said on Friday that Section 215 contains “several important and non-controversial tools used to keep the country safe”. On Saturday, the other leading House members backing the Freedom Act – judiciary committee chairman Robert Goodlatte and Democrats John Conyers and Jerrold Nadler – joined with Sensenbrenner to call 215 “a valuable counter-terrorism tool for the FBI.”

The Obama administration, which supports the USA Freedom Act, takes the same view. Barack Obama said on Tuesday that “everybody agrees” the non-bulk phone records collection aspects of Section 215 “are necessary to keep us safe”. The attorney general, Loretta Lynch, added on Wednesday that the expiration of Section 215 will mean “a serious lapse in our ability to protect the American people.” The homeland security secretary, Jeh Johnson, said it was “alarming … the legal authorization for activities critical to national security, law enforcement and public safety will expire”.

But the Justice Department report casts sharp doubt on all those claims.

“[T]he agents we interviewed did not identify any major case developments that resulted from use of the records obtained in response to Section 215 orders, but told us that the material produced pursuant to Section 215 orders was valuable in that it was used to support other investigative requests, develop investigative leads, and corroborate other information,” the report found.

Outside of the Justice Department inspector general report, other evidence has accumulated that the FBI has abused or not even used the other Patriot Act authorities set to expire.

In 2011, the Electronic Frontier Foundation found through a transparency lawsuit that the FBI had used the Patriot Act’s “roving wiretap” provision to spy on the communications of “young children” for five days. That same year, a senior Justice Department official, testifying on the “lone wolf” authority permitting surveillance on someone without a demonstrated connection to a terrorist group or foreign power, told a House panel: “We have not used this authority to date.”

“The lone wolf provision was designed to address a hypothetical threat that never materialized, so it was never used. It wasn’t necessary when it was created and it isn’t necessary now. The government has plenty of more appropriate tools to use to address real threats,” said Michael German, a former FBI agent now with the Brennan Center for Justice at New York University.

“It is not clear how the government has used the John Doe roving wiretap provision, but there is some evidence the lax targeting standards led to the inappropriate interception of innocent persons’ communications.”

Privacy advocates have been disappointed to see some of their congressional allies concede the value of provisions that they fought to repeal even before Snowden. Patrick Eddington of the Cato Institute called Section 215 an “unconstitutional digital bridge to nowhere”.

“The American people have learned the hard way to be skeptical of such scare-mongering,” said Jennifer Granick, director of civil liberties at Stanford University’s Center for Internet and Society.

“In fact, the only public information we have suggests the government has not used, or has misused, the expiring provisions. Given what we’ve learned and are continuing to learn about the NSA’s and FBI’s abuse of Section 215, it’s not at all unexpected that Congress would allow these provisions to sunset and then consider re-granting such powers only after a thorough investigation and public debate.”

Warren of the Center for Constitutional Rights added: “We would be wise to remember that law enforcement always says it needs greater flexibility, less transparency, less oversight, and a lower standard of legal proof in order to do its job. That wasn’t the case [in 2001] and there’s no reason to think this is the case now.”