Does Your Local Government Have a “Black Budget” Too? 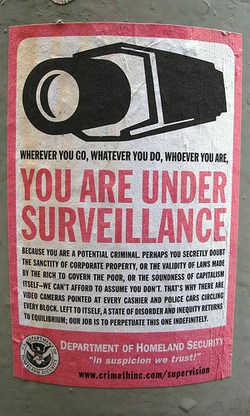 As we learn more about the US intelligence community’s top secret, multi-billion dollar “Black budget” and how the NSA pays technology companies to comply with the Prism spying program, another mostly unnoticed pipeline moves billions of federal surveillance dollars from the Department of Homeland Security (DHS) to local governments for dragnet surveillance systems that include video camera networks, automated license plate readers, facial recognition, and even drones and tanks. As the scope of federal surveillance becomes clearer, all of us should take a hard look at federal surveillance grants to local communities, consider how they distort local democracy, and demand more civil liberties safeguards, oversight, and accountability.

Federal grants to local and state governments for the purchase of new surveillance technology have risen dramatically over the last decade, all with little to no local oversight. Federal dollars—as much as $300 millionfrom DHS just last year—find their way to local governments via opaque grant programs. Many times, grant applications go to D.C. straight from the desk of unelected local officials. Local representatives and community members may not learn about these applications or the planned use of the grant money until it arrives, at which point there is subtle pressure to accept the funds or lose future federal dollars. Any debate over local purse strings slips into the background as the primary question for local governments becomes “Why wouldn’t we take this cash?”

Here in California we’ve seen numerous examples of federal grant funds encouraging local law enforcement to seek out surveillance technology. A portion of an estimated $50 million in federal funding has allowed Northern California police departments to adoptautomated license plate readers that record data on innocent citizens from atop police cars and save it in federal databases. In San Diego, a $500,000 federal grant funds a facial recognition system capable of identifying and building profiles of people without criminal records—this is in addition to the many federally-funded local video surveillance systems in California and elsewhere. Last year, the ACLU of Northern California fought the Alameda County Sheriff’s plans to seek acceptance of federal funds for a drone, and the Berkeley police department even acquired funds to purchase a tank. Finally, in July 2013 Oakland accepted $2 million federal dollars to create a “domain awareness center” network of surveillance technology aimed at its own residents. These examples are striking, yet they are just a snapshot of a larger national trend towards federally funded local surveillance (not to mention the militarization of police).

Like the federal intelligence community’s black budget, which allows our federal government to allocate billions of taxpayer dollars for spying, all without public debate, these federal grants to local communities also distort the democratic process and prevent a meaningful discussion of the relative costs and benefits of surveillance technology. This cannot continue. Increased transparency about surveillance programs needs to be built in from the start and it should begin with robust public discussion well before applications are made for federal funds.

Matthew Cagle is a Volunteer Attorney for Technology and Civil Liberties at the ACLU of Northern California.