Does US-Russia Deal in Syria Spell End of ‘Assad Must Go’ Policy? 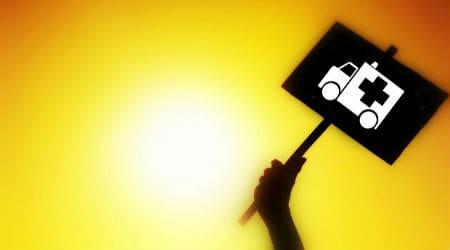 Suggesting that a more sober U.S. position is emerging—and cautious hope that bloodshed in the war-torn country may soon lessen—the United States and Russia on Monday announced that a “cessation of hostilities” in Syria will go into effect on Saturday, February 27.

“If implemented and adhered to, this cessation will not only lead to a decline in violence, but also continue to expand the delivery of urgently needed humanitarian supplies to besieged areas and support a political transition to a government that is responsive to the desires of the Syrian people,” U.S. Secretary of State John Kerry said in a statement.

The truce will apply “to those parties to the Syrian conflict that have indicated their commitment to and acceptance of its terms,” the statement reads, but not to ISIS militants or those from al-Nusra, the local branch of al-Qaeda.

Middle East Eye notes that “[c]rucially, it states that opposition groups signing up to the terms will be guaranteed protection from military action by Russia, the US and Syria.”

Meanwhile, President Vladimir Putin said Russia would do “whatever is necessary” to ensure that Damascus respects the agreement, adding: “We are counting on the United States to do the same with its allies and the groups that it supports.”

Indeed, the Guardian reports: “In a change to the previous aborted ceasefire, Russia and America have agreed to act as direct guarantors and monitors of the cessation of hostilities.”

Key to the agreement issued on Monday will be coordination between Washington and Moscow to set out territories that are subject to the ceasefire, and therefore must not be subject to aerial bombing by Russia, attacks by the Syrian army or the American backed opposition. In view of the intricate interweaving of the various factions, the shifting alliances and complexity of the front lines in Syria, communication between Russia and the US on the precise territory subject to a ceasefire will have to be tightly coordinated. The likelihood that either artillery fire or aerial bombardment will deliberately or inadvertently land in territory party to the ceasefire is high.

Though inherently tenuous given the volatility and complexities of the current situation, analysts have seen the prospect of a firmer U.S.-Russian agreement as the best hope for a lasting ceasefire in the war-torn country.

The agreement announced Monday will likely require the U.S. to adjust its diplomatic strategy “to take into account the likelihood that the Nusra Front will now be substantially weakened,” as Gareth Porter wrote last week.

In fact, he said, “Russian-Syrian success offers the most realistic prospect for an end to the bloodletting in Syria and would also reduce the likelihood of an eventual Al Qaeda seizure of power in Syria.”

The Obama administration certainly understands that fact and has already privately adjusted its diplomatic strategy to take into account the likelihood that the Nusra Front will now be substantially weakened. But it cannot acknowledge any of that publicly because such a recognition would infuriate many hardliners in Washington who still demand “regime change” in Damascus whatever the risks.

President Obama is under pressure from these domestic critics as well as from Turkey, Saudi Arabia and other GCC allies to oppose any gains by the Russians and the Assad regime as a loss for the United States. And Obama administration must continue to hide the reality that it was complicit in a strategy of arming Nusra – in part through the mechanism of arming Washington’s “moderate” clients – to achieve leverage on the Syrian regime.

One-sided and poor quality reporting from U.S. corporate media has only fueled such confusion and misinformation, veteran journalist and foreign policy expert Stephen Kinzerwrote at the Boston Globe on Friday. According to Kinzer:

Americans are being told that the virtuous course in Syria is to fight the Assad regime and its Russian and Iranian partners. We are supposed to hope that a righteous coalition of Americans, Turks, Saudis, Kurds, and the “moderate opposition” will win.

This is convoluted nonsense, but Americans cannot be blamed for believing it. We have almost no real information about the combatants, their goals, or their tactics. Much blame for this lies with our media.

The mainstream line on Syria, Kinzer wrote, seems to be: “Fight Assad, Russia, and Iran! Join with our Turkish, Saudi, and Kurdish friends to support peace!”

“This is appallingly distant from reality,” he concludes. “It is also likely to prolong the war and condemn more Syrians to suffering and death.”