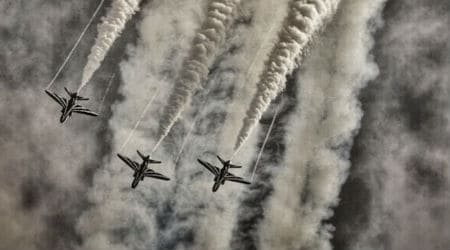 After the U.S.-backed, Saudi-led coalition bombed a hospital in Yemen supported by Doctors Without Borders on Monday, the U.S. State Department offered a rare condemnation of the coalition’s violence.

“Of course we condemn the attack,” said Elizabeth Trudeau, a spokesman for the State Department.

The State Department has previously deflected questions about coalition attacks by referring reporters to the Saudi government — even though the U.S. has supplied the coalition with billions of dollars of weapons, and hasrefueled Saudi planes.

“We’ve also encouraged them to do their utmost to protect entities protected by international law, such as hospitals,” said Trudeau.

But for the Saudi coalition, bombing medical facilities has become business as usual. In October, the coalition bombed an MSF-supported hospital in Yemen’s Haydan district, destroying the only emergency medical facility serving 200,000 people. (Doctors Without Borders is also known as Médecins Sans Frontières, or MSF.) In December, airstrikes destroyed an MSF clinic in Taiz while doctors were treating the wounded from a nearby Saudi airstrike in a park. And in January, the coalition destroyed a hospital in Razeh district, killing five people — and killing an ambulance driver working for MSF later that month.

Those strikes have been widely reported because they targeted a prominent Western charity, but the coalition has likely carried out far more attacks on Yemeni-run hospitals. During the first eight months of the war, between March and November 2015, the International Red Cross received hundreds of reports on attacks on health facilities throughout the country.

The hospital attack comes in the midst of an aggressive offensive by the Saudi regime after Houthi rebels in Yemen rejected a one-sided peace dealearlier this month. The coalition has since destroyed a food factory, achildren’s school, and a bridge that Oxfam described as “the main supply route for Sana.”

On Monday, Trudeau also denounced the destruction of the bridge. “We have seen those reports, and if the bridge was deliberately struck by coalition forces, we would find this completely unacceptable,” she said. “The bridge was critical for the delivery of humanitarian assistance, destruction will further complicate efforts to provide assistance to the people of Yemen.”

Trudeau clarified with reporters after the briefing that she meant that statement as a condemnation. “The bridge — you saw me condemn that today,” she said. Condemnation, rather than, say, concern, is considered strong diplomatic language.

The Saudi-led campaign in Yemen has launched the country into a humanitarian crisis. In March 2015, Saudi Arabia has imposed a strict blockade on Yemen, which previously imported 90 percent of its food and medicine. According to UNICEF in May, the conflict has left 21 million people in need of urgent humanitarian assistance, and more than 300,000 children under 5 at risk of severe malnutrition.

Despite the condemnations, Trudeau refused to say whether the State Department would reconsider arming the Saudi regime. “I have nothing to preview on that,” she said.

Alex Emmons is a reporter covering national security, foreign affairs, human rights, and politics. Prior to joining The Intercept, he worked for Amnesty International and the ACLU on their campaigns against targeted killing, mass surveillance, and Guantánamo Bay.