Hooray for Justice Kennedy, and hooray for everyone who has participated in the great nonviolent revolution for LGBT rights. 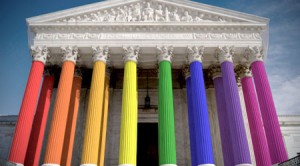 By Matthew Rothschild
The Progressive
http://www.progressive.org/supreme-court-doma-dead

The Supreme Court just struck down the Defense of Marriage Act, and in so doing, moved America closer to realizing the goal of equality under the law.

The decision is a huge victory for the gay rights movement, for gay and lesbian couples, for their children, and for all who believe in liberty and equality.

The majority 5-4 decision, written by Justice Kennedy, who was joined by the four liberals on the bench, points out how discriminatory DOMA was.

Here are some other key passages from the decision.

On our evolving attitudes toward same-sex marriage, and a new-found recognition of an injustice:

“It seems fair to conclude that, until recent years, many citizens had not even considered the possibility that two persons of the same sex might aspire to occupy the same status and dignity as that of a man and woman in lawful marriage. For marriage between a man and a woman no doubt had been thought of by most people as essential to the very definition of that term and to its role and function throughout the history of civilization. That belief, for many who long have held it, became even more urgent, more cherished when challenged. For others, however, came the beginnings of a new perspective, a new insight. Accordingly some concluded that same-sex marriage ought to be given recognition and validity in the law for those same-sex couples who wish to define themselves by their commitment to each other. The limitation of lawful marriage to heterosexual couples, which for centuries had been deemed both necessary and fundamental, came to be seen in New York and certain other States as an unjust exclusion. New York, in common with, as of this writing, 11 other States and the District of Columbia, decided that same-sex couples should have the right to marry and so live with pride in themselves and their union and in a status of equality with all other married persons. After a statewide deliberative process that enabled its citizens to discuss and weigh arguments for and against same- sex marriage, New York acted to enlarge the definition of marriage to correct what its citizens and elected representatives perceived to be an injustice that they had not earlier known or understood.”

It talked about the “evolving understanding of the meaning of equality.”

Then the court got down to the essential discriminatory purpose and effect of DOMA.

“It violates basic due process and equal protection principles.”

“The avowed purpose and practical effect of the law here in question are to impose a disadvantage, a separate status, and so a stigma upon all who enter into same-sex marriages made lawful by the unquestioned authority of the States.”

“The Act’s demonstrated purpose is to ensure that if any State decides to recognize same-sex marriages, those unions will be treated as second-class marriages for purposes of federal law. This raises a most serious question under the Constitution’s Fifth Amendment.”

“DOMA’s principal effect is to identify a subset of state- sanctioned marriages and make them unequal. The principal purpose is to impose inequality.”

“DOMA writes inequality into the entire United States Code,” and the decision says that 1,000 federal statutes and many more regulations are implicated.

It explained how DOMA creates second-class citizens and is cruel to the children of same-sex couples:

DOMA “places same-sex couples in an unstable position of being in a second-tier marriage. The differentiation demeans the couple, whose moral and sexual choices the Constitution protects, see Lawrence, 539 U. S. 558, and whose relationship the State has sought to dignify. And it humiliates tens of thousands of children now being raised by same-sex couples.”

“Congress…cannot deny the liberty protected by the Due Process Clause of the Fifth Amendment.”

“The principal purpose and the necessary effect of this law are to demean those persons who are in a lawful same-sex marriage. This requires the Court to hold, as it now does, that DOMA is unconstitutional as a deprivation of the liberty of the person protected by the Fifth Amendment of the Constitution.”

Here is the conclusion of Justice Kennedy’s decision:

“DOMA singles out a class of persons deemed by a State entitled to recognition and protection to enhance their own liberty. It imposes a disability on the class by refusing to acknowledge a status the State finds to be dignified and proper. DOMA instructs all federal officials, and indeed all persons with whom same-sex couples interact, including their own children, that their marriage is less worthy than the marriages of others. The federal statute is invalid, for no legitimate purpose overcomes the purpose and effect to disparage and to injure those whom the State, by its marriage laws, sought to protect in personhood and dignity. By seeking to displace this protection and treating those persons as living in marriages less respected than others, the federal statute is in violation of the Fifth Amendment.”

Hooray for Justice Kennedy, and hooray for everyone who has participated in the great nonviolent revolution for LGBT rights.