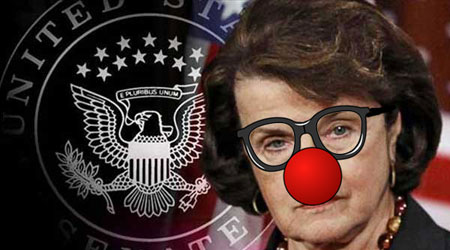 Senator Dianne Feinstein, as we’ve noted, seems to have this weird blindness to even the very idea that the NSA might abuse its powers, despite a long history of it doing exactly that. The history of the US intelligence community is littered like a junk yard with examples of massiveabuses of power by intelligence folks. And yet, Feinstein seems shocked at the idea that anyone questions the NSA’s ability to abuse the system. Why? Because the NSA is “professional.” Appearing on Meet the Press this weekend, Feinstein just kept repeating how “professional” the NSA is as if that was some sort of talisman that wards off any potential of abuse. First, host David Gregory pointed to reporter Bart Gellman’s claim that President Obama’s NSA reforms will allow for the expansion of the NSA’s collecting personal data on “billions of people around the world, Americans and foreign citizens alike” and told Feinstein that didn’t seem like it was protecting people’s privacy. And Feinstein went straight to her “but they’re professionals!” argument:

Well, I would disagree with Mr. Gellman. I think that what the president has said is that he wanted to maintain the capability of the program. That, as Chairman Rogers said, it has not been abused or misused. And it is carried out by very strictly vetted and professional people.

Of course it has been “abused” and “misused,” but let’s not let details get in the way.

Later in the interview, Gregory asks Feinstein to comment on Rep. Mike Roger’s totally unsubstantiated (and contradicted by nearly everyone else in the know) claims that Ed Snowden was working for Russian intelligence, and Feinstein bizarrely returns to talking about just how “professional” NSA staffers are.

DAVID GREGORY:
And do you agree with Chairman Rogers that he may have had help from the Russians?

SENATOR DIANNE FEINSTEIN:
He may well have. We don’t know at this stage. But I think to glorify this act is really to set sort of a new level of dishonor. And this goes to where this metadata goes. Because the N.S.A. are professionals. They are limited in number to 22 who have access to the data. Two of them are supervisors. They are vetted. They are carefully supervised. The data goes anywhere else. How do you provide that level of supervision?

In fact, I’d think pretty much the entirety of human history concerning intelligence efforts suggests that abuse is almost always carried out by people who are “vetted” and “professional.” And that’s exactly what has most people so concerned about these programs and what the NSA is doing. No matter how well-meaning, well-trained or well-vetted people are, the temptation and ability for abuse is way too strong. Just last week, we were quoting a bunch of “vetted” and “professional” NSA folks talking about how they fantasized about murdering Ed Snowden. Those comments don’t sound particularly professional at all. They sound like people who shouldn’t be allowed within miles of people’s private data. But Feinstein apparently sees no problems with those kinds of people having the ability to search through your private data. Because they’re “professional.”