By Michael Cohen / The Guardian 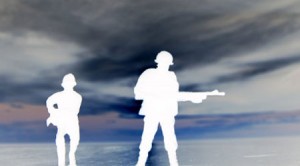 On the surface this language – and the proposal to cut the army’s active force to between 440,000 to 450,000 troops – made the announcement of the Pentagon’s five-year budget blueprint seem like an historic event. But only in the alternate universe of Washington DC could a reduction of the active force from a wartime peak of 570,000 to 450,000 be portrayed in such a manner. And, of course, only in Washington could it bedescribed by a Dick Cheney as doing “enormous long-term damage to our military”. This is the same Dick Cheney, by the way, who when he was Secretary of Defense cut the size of the active force (pdf) from 770,000 in 1989 to 572,000 in 1993.

Rather than a reflection of a changing global security environment, the growing and continued obsolescence of inter-state war and the country’s lack of interest in future military adventures, the cuts announced yesterday by Hagel are an indication of something else altogether: how tenaciously the Pentagon is able to maintain a bloated and extravagant military force even when the US faces no actual security threats.

So the United States is in a wee bit better military shape than it was in 1940. What else is different about the world today than it was three-quarters of a century ago?
•NATO exists
•The United Nations exists, as do a whole host of international laws governing the appropriate use of military force and protecting human rights
•The United States has military alliances and partnership with dozens of countries
•In 1940 there were a handful of democracies in the world; today there are 117. There is also widespread economic prosperity and integration; higher living standards in practically every corner of the world and billions of people are living longer more fulfilling lives.

All of these elements of global relations point in a direction of fewer and more easily resolvable conflicts. But if that’s not enough for you, here are a few things that existed in 1940 and don’t exist today:
•Fascism
•Communism (ish)
•Adolf Hitler, Joseph Stalin and Mao.
•The Soviet Union
•Nazi Germany
•Imperial Japan
•An actual military rival of the United States
•Any reason to expect the United States to send a massive ground force anywhere to fight a war.

But really, if you put all that aside; cutting the size of the active force today to around 450,000 troops is pretty much exactly like 1940.

What’s also missing from this debate is the rather salient fact that this reduction in the US ground force is pretty much what the army was counting on. Consider for example, Ray Odierno, the Army Chief of Staff and a man who has complained more bitterly about cuts to the army’s active force than practically anyone else in Washington. An army of a mere 420,000 soldiers would make “a huge difference in the capabilities that we have” said Odierno earlier this month at the Council on Foreign Relations. “If you get too small, you lose your ability to compel and deter those from making bad decisions … it’s important that we sustain enough capability to make sure that people don’t miscalculate, so we don’t go to war,” said Odierno. “I think about 450,000 is right.”

That’s exactly the number he got. Of course, missing from these figures is the additional 500,000 plus troops that make up the National Guard and Reserves – both of which played critical roles in Iraq andAfghanistan. In fact, instead of cutting the active force and embedding more capabilities in the guards and reserves both groups got a small haircut.

Still those additional 30,000 troops that Odierno deemed essential are integral to deterring an enemy that no one at this point can actually identify. One cannot ignore the possibility that someone out there is a country that would view an additional 30,000 man reduction in the size of the US army as just the opening they need to seek military domination against a nation that is responsible for nearly 40% of all global defense outlays and spends as much on its armed forces as the next 13 nations combined.

In the end, the numbers revealed yesterday, while giving a modest nod to new fiscal realities, are a triumph of 1% strategic thinking – maintaining a military force for worst case and unlikely scenarios. For most federal agencies, budgeting is about prioritizing and making tough choices based in part on determining the proper balance between risks versus costs. For the military it is about getting 95 plus percent of what is wanted and portraying it as a concession. But then again, you can never be too careful when it comes to deterring and confronting phantom threats.

Indeed, the most important difference between now and the period before the second world war is the existence of actual threats to global peace and stability. Seven and a half decades ago, the world was on the cusp of a global conflagration that would take the lives of an estimated 70 million people. The exact opposite is true in 2014. Today we are living in an era of historically unprecedented safety. War between nations, which was once the bedrock of international relations, has largely disappeared. When conflicts do break out they tend to be shorter in duration and far less violent.

For example, the eminent historian Max Hastings estimates that on an average day of the second world war, 27,000 people lost their lives. In 2012, the estimated number of battle-related deaths was between 37,000 and 60,000 people or the equivalent of two days of the second world war. This is a seminal and extraordinary shift in not just international relations but human relations. Yet, Secretary of DefenseChuck Hagel still spoke yesterday of the “dangerous world we live in” and “a world that is growing more volatile, more unpredictable, and in some instances more threatening to the United States”.

Such platitudes are practically pro forma out of the mouths of politicians and military leaders, but they describe a world that exists in their minds rather than in reality. It is this imagined world that is reflected in a military budget that brings a small step in the right direction but doesn’t go nearly far enough in acclimating the Pentagon to the reality of the world today.