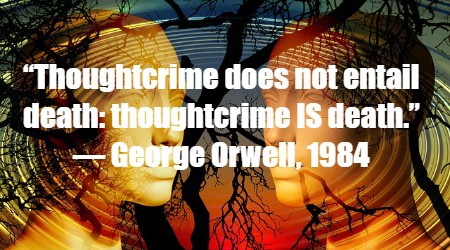 A supervisor at the Energy Department’s international climate office told staff this week not to use the phrases “climate change,” “emissions reduction” or “Paris Agreement” in written memos, briefings or other written communication.

On the fourth floor of the Eisenhower Executive Office Building, the staff of the White House chief technology officer has been virtually deleted, down from 24 members before the election to, by Friday, only one.

“It was a bright cold day in April, and the clocks were striking thirteen.”

So begins George Orwell’s dystopian drama “1984,” his 1949 novel whose popularity has surged since President Donald Trump took office earlier this year. The book climbed to the top spot of Amazon’s bestseller list in January after Trump advisor Kellyanne Conway defended false claims about the inauguration crowd as merely “alternative facts.”

Amy Goodman and Denis Moynihan, Truthdig: In Trump’s America, Your Privacy Is for Sale

This law is the ultimate hack: allowing corporations to take all of our information and sell it for profit. In Donald Trump’s America, the information isn’t stolen by hackers in the dark of night. It is taken with the government’s blessing.