Twice in the past year, President Obama has set plans to get U.S. spy agencies out of secret missions that had come under harsh public scrutiny: killing militants with drone strikes and stockpiling the phone records of U.S. citizens.

And twice, those plans have run into opposition from a seemingly unlikely source: Sen. Dianne Feinstein, a former Senate colleague of the president, a California Democrat and, as chairman of the Senate Intelligence Committee, increasingly an obstacle to Obama’s push to revamp intelligence programs.

Within hours of Obama’s Jan. 17 speech declaring his intention to “end” government collection of Americans’ phone recordsbecause of the potential for abuse, Feinstein issued a statement that ignored the overall thrust of the presidents’ remarks. Instead, she and her GOP counterpart in the House described the speech as an endorsement of “the importance of using telephone metadata to rapidly identify possible terrorist plots.”

Feinstein is also an ardent opponent of Obama’s plan to shift control of lethal drone operations from the CIA to the Defense Department. This month, Congress inserted a secret provision into a massive funding bill, designed to delay — if not derail — that transfer.

Feinstein’s willingness to oppose Obama is seen by some as evidence of a laudable independence from political considerations. To others, her positions are regarded as troubling indications that a committee created to serve as skeptical overseer of spy agencies has instead become their most reliable ally.

Amid an ongoing deluge of disclosures about U.S. surveillance programs, Vladeck said, “to my mind the larger concern over the last six months is a lack of any evidence that there’s ever been a significant pushback from either of the intelligence committees on any of the more controversial initiatives.”

Feinstein declined requests for an interview. In a written statement to The Washington Post, she said, “I am enormously supportive of the administration’s major foreign and national security policies.” She also expressed support for some of Obama’s more modest intelligence proposals, including limiting theNational Security Agency’s authority to search its phone database.

Feinstein has often indicated that her views are shaped by her access to classified information about how programs are run, as well as secret intelligence on terrorist threats.

“I think a lot of the privacy people don’t understand that we still occupy the role of Great Satan,” she said in a recent television interview, referring to hostility toward the United States among Islamist extremists.

Feinstein, 80, has served as chairman of the intelligence committee since the start of Obama’s presidency. She has defended the administration on some politically charged issues, including the 2012 attacks by militants on U.S. government compounds in Benghazi, Libya.

She has also launched investigations of intelligence programs she opposed. Her largest undertaking as chairman was a multi-year investigation of the CIA’s interrogation program after the Sept. 11, 2001, attacks — a George W. Bush-era program that was dismantled before the probe began. A 6,000-page report produced by the committee remains classified.

Feinstein backed Obama’s decision at the outset of his first term to shutter the CIA’s prisons and his pledge to close the detention camp at Guantanamo Bay, Cuba. But Feinstein has more often been at odds with Obama in his second term, opposing him on the only two intelligence-related issues he has considered important enough to address in a major public speech.

After Obama announced plans in May to impose new restrictions on drone strikes, Feinstein came out against a White House plan to shift such operations to the Pentagon, saying she was skeptical that the military could conduct strikes with the same level of precision as the CIA.

Her effort to head off major changes to the NSA’s collection of billions of Americans’ phone records has been more aggressive and open. After the disclosures by former intelligence contractor Edward Snowden triggered a public outcry, Feinstein introduced a bill that proposed minor changes, including requiring more detailed reporting to Congress, but that would leave the bulk collection of U.S. phone records in place.

Former U.S. officials fault Obama for the friction with Feinstein, saying that he appears to have done little to cultivate her support before announcing potentially major changes to the spy agencies she oversees. A White House spokeswoman declined to comment.

The leaders of U.S. spy agencies have come to see Feinstein “as an unlikely bedfellow sent from heaven,” said a former senior Obama administration official involved in deliberations on the drone program who spoke on the condition of anonymity. Feinstein is “a hawk who is asserted to be a liberal. She covers their left flank.”

Feinstein’s position on the NSA program has put her at odds not only with Obama but also with many of her Democratic colleagues, as well as two White House panels that have recommended ending the government’s role in gathering phone data and concluded that it had been of no dis­cern­ible value in preventing terrorist plots.

In her statement, Feinstein expressed a willingness to consider Obama’s plan to shift control of call data to phone companies or a new entity, but only if “security is maintained, costs are contained and the operational speed and flexibility of the program is preserved.”

Mark Lowenthal, a former CIA official and senior congressional aide, said Feinstein should be praised for being independent. “It makes her a very serious voice in this debate because she is in [Obama’s] party,” Lowenthal said. “She’s been looking at these programs for many years.” 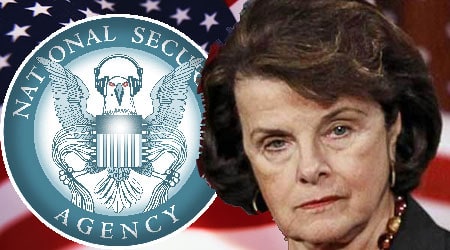