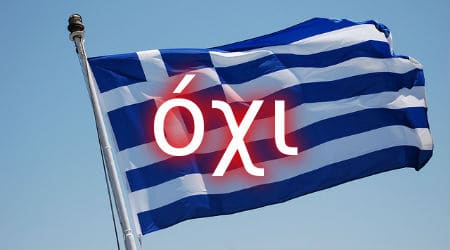 by Paul Krugman
Conscience of a Liberal (Krugman’s Blog)

Tsipras and Syriza have won big in the referendum, strengthening their hand for whatever comes next. But they’re not the only winners: I would argue that Europe, and the European idea, just won big — at least in the sense of dodging a bullet.

I know that’s not how most people see it. But think of it this way: we have just witnessed Greece stand up to a truly vile campaign of bullying and intimidation, an attempt to scare the Greek public, not just into accepting creditor demands, but into getting rid of their government. It was a shameful moment in modern European history, and would have set a truly ugly precedent if it had succeeded.

But it didn’t. You don’t have to love Syriza, or believe that they know what they’re doing — it’s not clear that they do, although the troika has been even worse — to believe that European institutions have just been saved from their own worst instincts. If Greece had been forced into line by financial fear mongering, Europe would have sinned in a way that would sully its reputation for generations. Instead, it’s something we can, perhaps, eventually regard as an aberration.

And if Greece ends up exiting the euro? There’s actually a pretty good case for Grexit now — and in any case, democracy matters more than any currency arrangement.