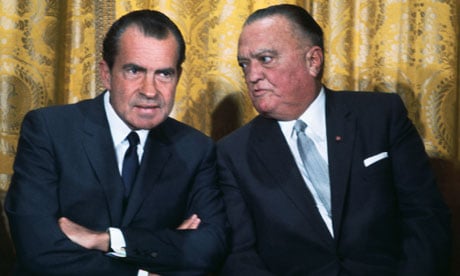 I vividly remember the eureka moment. It was the night we broke into an FBI office in Media, Pennsylvania, in March 1971 and removed about 1,000 documents from the filing cabinets. We had a hunch that there would be incriminating material there, as the FBI under J Edgar Hoover was so bureaucratic that we thought every single thing that went on under him would be recorded. But we could not be sure, and until we found it, we were on tenterhooks.

A shout went up among the group of eight of us. One of us had stumbled on a document from FBI headquarters signed by Hoover himself. It instructed the bureau’s agents to set up interviews of anti-war activists as “it will enhance the paranoia endemic in these circles and will further serve to get the point across there is an FBI agent behind every mailbox.”

That was the first piece of evidence to emerge. It was a vindication.

Looking back on what we did, there are obvious parallels with what Edward Snowden has done in releasing National Security Agency documents that show the NSA’s blanket surveillance of Americans. I think Snowden’s a legitimate whistleblower, and I guess we could be called whistleblowers as well.

A look back at what happened

I was 29 when my husband John and I decided to join six other people to carry out the break-in. I was a mother of three children, aged eight, six and two, and I was working on a degree in education at Temple University, where John was a professor of religion.

We had both been heavily involved in the civil rights movement. John had been a freedom rider, and in Philadelphia we participated in anti-war protests against Vietnam. Through that activity we knew that the FBI was actively trying to squelch dissent, illegally and secretly. We knew that they were sending informants into university classrooms, infiltrating meetings, and tapping phones. The problem was that though we knew all this, there was no way to prove it.

A physics professor at Haverford College named Bill Davidon called a few of us together at his home. Bill, who died last November, floated the idea of doing something to obtain evidence. He just came out with it: “What do you think about breaking into an FBI office to remove the files?” If it hadn’t been for Bill, who was so smart and strategic, I’m not sure we would have taken it seriously. But we did.

Bill articulated for all of us the frustration over the foment of those times, and the feeling that we all had of being compelled to do something as ordinary citizens because no one in Washington was holding Hoover accountable. We started looking into the feasibility of a break-in. Right away, we found out the main FBI office in Philadelphia was in a high-rise in the center of the city, and that it was impregnable. Then we learned there were other field offices in the suburbs, and that lead us to Media.

John and I lived in a big old house in the Germantown area of Philadelphia, and we set aside a room in the third floor to be our base of operations. We lined the walls with maps of Media. We had to tell our elder children not to talk to anyone about the maps on the walls. Even though they knew nothing of our plans, we worried the detail might give something away.

We cased the FBI office in Media for about three months. Two of us would go and watch activity in and around that building, record people going in and out and the patterns of police patrols.

I was chosen to carry out the last piece of casing, which involved getting into the office during business hours to check out its security systems. I called and made an appointment to interview the head of the office, under the ruse that I was a Swarthmore College student researching opportunities for women in the FBI.

I tried not to arouse suspicions, tucking up my long hippy hair in a hat, wearing glasses and gloves throughout the interview even though I was taking notes. Through that visit I learned there was no security, none at all, in the office – even the filing cabinets were left unlocked.

I think it was Bill Davidon’s idea to choose 8 March 1971 as the operation’s date. It was the night of Muhammad Ali’s fight against Joe Frazier, and we thought people would be listening on their radios and that the police would perhaps be a little less vigilant.

As the day approached, we both grew anxious. We had three children, there was a lot at jeopardy. We knew that if things went wrong and we were convicted, we could go to federal prison for a long time. We talked to my husband’s brother and to my parents, without telling them the details, and asked them to take care of our children if the worst happened.

John wasn’t sleeping well. I was a little more bold and determined, a little gung-ho I guess. My association with good people in the movement gave me strength, and the idea that citizens have to take responsibility for when our rights are being abused.

Four of us broke into the FBI office. Keith Forsyth had trouble picking the lock, which was daunting. My job that night was to distract any patrolling police cars by pretending my own vehicle had broken down. Luckily, no police drove by.

We spent a week going through the documents and then mailing them out anonymously to congresspeople and some progressive journalists. All the journalists, including the New York Times, returned the documents to the FBI under pressure from the Nixon White House. Everyone was afraid of Hoover, except the Washington Post. After the Post published the documents, everyone else jumped on board.

Democracy needs whistleblowers. Snowden was in a position to reveal things that nobody could dispute. He has performed a legitimate, necessary service. Unlike us, he revealed his own identity, and as a result, he’s sacrificed a lot.

On our part, you could accuse us of being criminals – and Hoover did just that: he was apoplectic and sent 200 agents to try and find us in Philadelphia. “Find me that woman!” he screamed at them.

But to us there didn’t seem to be an alternative at that point. No one was going to be hurt. We hoped for the outcomes that we wanted. We knew, of course, that we were breaking law, but I think that sometimes you have to break laws in order to reveal something dangerous, and to put a stop to it.

For five years we lived under the threat of arrest. There was a sketch of me that the FBI circulated from when I impersonated a Swarthmore student, though I didn’t know it at the time. And the FBI interviewed John, luckily while I was out of the house. After five years, the statute of limitations fell for the burglary and we knew we were safe. We didn’t celebrate on the fifth anniversary, though after that we were more relaxed. We now know they closed the case in 1976 for lack of any physical evidence.

Eventually, we told the children, and the story became part of family lore. We wanted them to know about that chapter in our history, and besides, you can’t ask your children to act according to their conscience unless you show them what you have done in your life, too.

I still worry a great deal about the state of our democracy. Back in 1971, the country was so divided, there was so much foment, but there was also much determination to change things, and people felt empowered to do so.

Nowadays, the country is divided once again, but I don’t see much concern about the abuses that are happening today, like the surveillance of mosques in America, using agent provocateurs. I hear people say, “I don’t care,” the government can do what it needs to do as long as it protects me from terrorism …” To me, that’s giving the authorities blanket permission to cross the line again.

Dissent and accountability are the lifeblood of democracy, yet people now think they just have to roll over in the name of “anti-terrorism”. Members of government thinks it can lie to us about it, and that they can lie to Congress. That concerns me for the future of my children and grandchildren, and that too makes me feel I can talk about, at my age, doing something as drastic as breaking-in to an FBI office in the search for truth.

Bonnie Raines was one of eight heroic whistleblowing Americans who committed ‘burglary’ on the FBI office in Media, Pennsylvania on March 8, 1971.