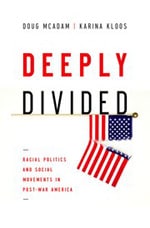 By many measures the United States has not been more divided politically or economically in the last hundred years than it is now. How have we gone from the striking bipartisan cooperation and relative economic equality of the war years and post-war period to the extreme inequality and savage partisan divisions of today?

In this sweeping look at American politics from the Depression to the present, Doug McAdam and Karina Kloos argue that party politics alone is not responsible for the mess we find ourselves in. Instead, it was the ongoing interaction of social movements and parties that, over time, pushed Democrats and Republicans toward their ideological margins, undermining the post-war consensus in the process. The Civil Rights struggle and the white backlash it provoked reintroduced the centrifugal force of social movements into American politics, ushering in an especially active and sustained period of movement/party dynamism, culminating in today’s tug of war between the Tea Party and Republican establishment for control of the GOP.

“This is a fascinating book on the politics of racial and social inequality in the United States. A must-read.” ~Thomas Piketty, author of Capital in the 21st Century

In Deeply Divided, McAdam and Kloos depart from established explanations of the conservative turn in the United States and trace the roots of political polarization and economic inequality back to the shifting racial geography of American politics in the 1960s. Angered by Lyndon Johnson’s more aggressive embrace of civil rights reform in 1964, Southern Dixiecrats abandoned the Democrats for the first time in history, setting in motion a sustained regional realignment that would, in time, serve as the electoral foundation for a resurgent and increasingly more conservative Republican Party. 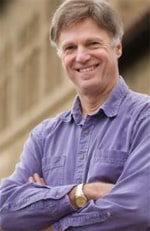 Doug McAdam is The Ray Lyman Wilbur Professor of Sociology at Stanford University and the former Director of the Center for Advanced Study in the Behavioral Sciences.  He is the author or co-author of 18 books and some 85 other publications in the area of political sociology, with a special emphasis on race in the U.S., American politics, and the study of social movements and “contentious politics.”  Among his best known works are Political Process and the Development of Black Insurgency, 1930-1970, a new edition of which was published in 1999 (University of Chicago Press), Freedom Summer (1988, Oxford University Press), which was awarded the 1990 C. Wright Mills Award as well as being a finalist for the American Sociological Association’s best book prize for 1991 and Dynamics of Contention (2001, Cambridge University Press) with Sid Tarrow and Charles Tilly.  He is also the author of the 2012 book, A Theory of Fields (Oxford University Press), with Neil Fligstein.