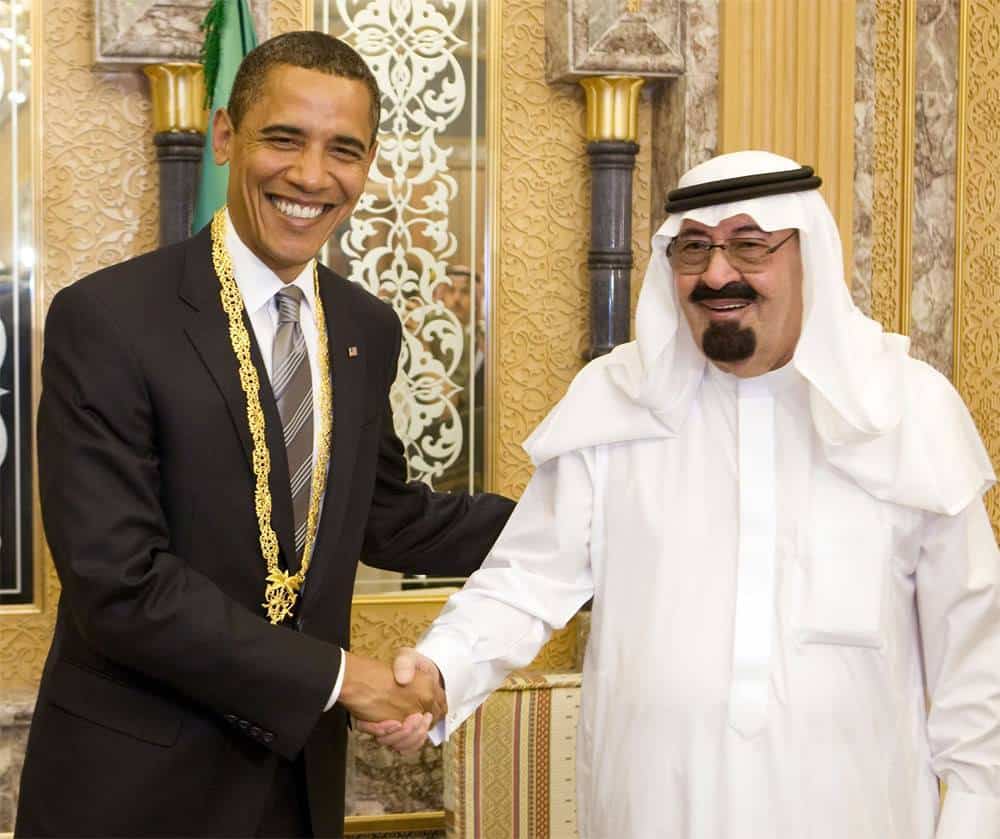 Few Americans seem to comprehend what is unfolding in the Middle East – with the latest conflict involving Saudi airstrikes against the Houthi rebels who now control Yemen’s capital of Sanaa. In this swirl of regional wars, it’s often not clear where the U.S. government stands and how American interests are affected.

The reason for the confusion is simple: Many key pundits who get to explain what’s going on from the op-ed pages of the major U.S. newspapers and from the TV talk shows prefer that the American people don’t fully grasp what’s happening. Otherwise, the people might realize the dangers ahead and demand substantial changes in U.S. government policies.

But a few basic points can help decipher the confusion: Perhaps the most important is that – although it’s rarely acknowledged in the mainstream U.S. media – Israel is now allied with Saudi Arabia and other Sunni Persian Gulf states, which are, in turn, supporting Sunni militants in Al-Qaeda and the Islamic State. Sometimes directly, sometimes indirectly, this Israel-Saudi bloc sustains Al-Qaeda and, to a somewhat lesser degree, the Islamic State.

The U.S. news media is loath to note these strange Israeli bedfellows, but there’s a twisted logic to the Israeli-Saudi connection. Both Israel and the Saudi bloc have identified Shiite-ruled Iran as their chief regional adversary and thus are supporting proxy wars against perceived Iranian allies in Syria and now Yemen. The Syrian government and the Houthi rebels in Yemen are led by adherents to offshoots of Shiite Islam, so they are the “enemy.”

The schism between Sunni and Shiite Islam dates back to 632, to the secession struggle after the death of the Prophet Muhammad. The dispute led to the Battle of Karbala where Hussein ibn Ali was captured and beheaded in 680, an event that gave rise to Shiite Islam as a rival to Sunni Islam, which today has both moderate and extremist forms with Saudi Arabia sponsoring the ultra-fundamentalist Wahhabism.

The extremist Wahhabism has inspired some of the most radical Sunni movements, including Al-Qaeda and now the Islamic State, along with their practice of suicide attacks as a form of martyrdom that has become a staple of these groups’ anti-Western jihad.

In other words, what has most outraged Americans has been the behavior of these Sunni extremists, from Al-Qaeda’s 9/11 attacks to the Islamic State’s beheading of helpless hostages and religious minorities in Syria and elsewhere. And, the principal backer of this Sunni extremism has been Saudi Arabia where wealthy prince-playboys buy leniency for their licentious behavior from the religious ulema (or leaders) by financing the extreme Wahhabi teachings. [See Consortiumnews.com’s “The Secret Saudi Ties to Terrorism.”]

The West has had grievances with elements of the Shiite world, too, such as the seizure of U.S. Embassy hostages in Iran in 1979 and excessive violence by the Syrian military against opposition forces in 2011. But the most intense American anger has been provoked by the actions of Sunni fundamentalists involving mass murder of innocents.

Yet, over the years, the U.S. government has exploited the general lack of knowledge among Americans about the intricacies of Middle East religions and politics by funneling the anger against one group to rationalize actions against another.

For instance, in 2003, as revenge for the 9/11 slaughter of 3,000 Americans – carried out primarily by Saudi extremists under the leadership of Saudi Osama bin Laden – President George W. Bush shielded the Saudis from blame and ordered the invasion of Iraq to oust Saddam Hussein, a secular Sunni dictator who was a fierce opponent of Al-Qaeda and other religious fanatics.

Ironically, that war put Shiites in power in Baghdad, turned Iraq’s Sunnis into a persecuted minority, and created fertile ground for a particularly virulent strain of Al-Qaeda to take root under the leadership of Jordanian terrorist Abu Musab al-Zarqawi. That group became “Al-Qaeda in Iraq,” later morphing into “the Islamic State of Iraq and Syria” and finally into “the Islamic State,” with its own twisted branches reaching out across the Middle East and Africa to justify more provocative slaughter of Westerners and “non-believers.”

While on the surface, Saudi Arabia, the United Arab Emirates and other Persian Gulf states repudiate this violent extremism, some of their oil-rich princes and intelligence services have provided covert support to Al-Qaeda and the Islamic State to advance the cause of breaking the “Shiite crescent” – from Tehran through Baghdad and Damascus to Beirut.

In seeking to smash this “Shiite crescent,” these Sunni-ruled states have been joined by Israel, which has taken the position that Iran and its Shiite allies are more dangerous than the Sunni extremists, thus transforming Al-Qaeda and the Islamic State into the “lesser evils.”

This was the subtext of Israeli Prime Minister Benjamin Netanyahu’s address to Congress on March 3 – that the U.S. government should shift its focus from fighting Al-Qaeda and the Islamic State to fighting Iran.

One of the hit lines of Netanyahu’s speech was when he told a cheering Congress that the United States should not collaborate with Iran just because it was the most effective counterforce to the bloodthirsty ISIS. Or as he put it, “So when it comes to Iran and ISIS, the enemy of your enemy is your enemy.”

But Netanyahu was soft-pedaling his real message, which was that ISIS with its “butcher knives, captured weapons and YouTube” was a minor annoyance compared to Iran, which he accused of “gobbling up the nations” of the Middle East. To the applause of Congress, he claimed “Iran now dominates four Arab capitals, Baghdad, Damascus, Beirut and Sanaa. And if Iran’s aggression is left unchecked, more will surely follow.”

His choice of capitals was peculiar because Iran took none of those capitals by force and, indeed, was simply supporting the embattled government of Syria and was allied with elements of the government of Lebanon. As for Iraq, Iran’s allies were installed not by Iran but by President George W. Bush via the U.S. invasion. And, in Yemen, a long-festering sectarian conflict has led to the capture of Sanaa by Houthi rebels who deny that they are supported by Iran (although Iran may have provided some limited help).

Amid the wild and inchoate cheering by Republicans and many Democrats, Netanyahu continued: “We must all stand together to stop Iran’s march of conquest, subjugation and terror.” But, in reality, there has been no “march of conquest.” There have been no images of Iranian armies on the march or a single case of Iranian forces crossing a border against the will of a government.

Netanyahu’s oration was just another example of his skillful (but dishonest) propaganda – and the groveling behavior of the U.S. Congress when in the presence of an Israeli leader.

Among the many facts that Netanyahu left out was Israel’s historically close ties to Iran even during the reign of Ayatollah Ruhollah Khomeini in the 1980s when the Israelis served as a key Iranian arms supplier after the Saudi-backed Iraqi invasion of Iran. Only after that eight-year-long war ended – and Iran’s treasury was depleted – did Israel shift away from Iran and toward the oil-rich Saudis.

Regarding the Syrian civil war, senior Israelis have made clear they would prefer Sunni extremists to prevail over President Assad, who is an Alawite, a branch of Shiite Islam. Assad’s relatively secular government is seen as the protector of Shiites, Christians and other minorities who fear the vengeful brutality of the Sunni jihadists who now dominate the anti-Assad rebels.

In one of the most explicit expressions of Israel’s views, its Ambassador to the United States Michael Oren, then a close adviser to Netanyahu, told the Jerusalem Post in September 2013 that Israel favored the Sunni extremists over Assad.

“The greatest danger to Israel is by the strategic arc that extends from Tehran, to Damascus to Beirut. And we saw the Assad regime as the keystone in that arc,” Oren told the Jerusalem Post in an interview. “We always wanted Bashar Assad to go, we always preferred the bad guys who weren’t backed by Iran to the bad guys who were backed by Iran.” He said this was the case even if the “bad guys” were affiliated with Al-Qaeda.

And, if you might have thought that Oren had misspoken, he reiterated his position in June 2014 at an Aspen Institute conference. Then, speaking as a former ambassador, Oren said Israel would even prefer a victory by the Islamic State, which was massacring captured Iraqi soldiers and beheading Westerners, than the continuation of the Iranian-backed Assad in Syria.

“From Israel’s perspective, if there’s got to be an evil that’s got to prevail, let the Sunni evil prevail,” Oren said.

Israel’s preference has extended into a tacit alliance with Al-Qaeda’s Nusra Front in Syria, with which the Israelis have essentially a non-aggression pact, even caring for Nusra fighters in Israeli hospitals and mounting lethal air attacks against Lebanese and Iranian advisers to the Syrian military.

Over the past decade, the Israelis and the Saudis have built a powerful alliance, a relationship that has operated mostly behind the curtains. They combined their assets to create what amounted to a new superpower in the Middle East, one that could project its power mostly via the manipulation of U.S. policymakers and opinion leaders – and thus deployment of the U.S. military.

Israel possesses extraordinary political and media influence inside the United States – and Saudi Arabia wields its oil and financial resources to keep American officialdom in line. Together, the Israeli-Saudi bloc now controls virtually the entire Republican Party, which holds majorities in both chambers of Congress, and dominates most mainstream Democrats as well.

Reflecting the interests of the Israeli-Saudi bloc, American neocons have advocated U.S. bombing against both the Syrian and Iranian governments in pursuit of “regime change” in those two countries. Prominent neocons, such as John Bolton and Joshua Muravchik, have gone to the pages of the New York Times and Washington Post to openly advocate U.S. bombing campaigns against Iran. [See Consortiumnews.com’s “NYT Publishes Call to Bomb Iran.”]

But the problem with this Israeli-Saudi strategy for the American people is that the only viable military alternatives to the Assad government in Syria are Al-Qaeda’s Nusra Front and the even more brutal Islamic State. So if Israel, Saudi Arabia and the neocons succeed in ousting Assad, the likely result would be the black flags of Al-Qaeda or the Islamic State flying over Damascus.

That would likely mean major atrocities, including executions of Christians and other religious minorities, as well as terrorist plots mounted against Europe and the United States. An Al-Qaeda or Islamic State conquest of Damascus would likely force any U.S. president to invade Syria at enormous costs in blood and treasure, albeit with little hope of achieving any long-term success.

Such a U.S. intervention might very well mean the end of the United States as a viable democratic society – to the extent that one exists today. A full-scale transformation into a militaristic state would be required to sustain this open-ended conflict, channeling national wealth into endless warfare and requiring the repression of anti-war sentiments at home.

So, what is at stake for the American Republic is essentially existential, whether the constitutional structure that began in 1789 will continue or will disappear. Politicians, who say they love the Constitution but follow Netanyahu into this dead-end for the Republic, are speaking out of both sides of their mouths.

The only hope for the Republic would come from recalling the wisdom of America’s first presidents – to avoid entangling foreign alliances when they drag the United States toward destruction.

Robert Parry broke many of the Iran-Contra stories in the 1980s for the Associated Press and Newsweek. His latest book, Neck Deep: The Disastrous Presidency of George W. Bush, was written with two of his sons, Sam and Nat. His two previous books are Secrecy & Privilege: The Rise of the Bush Dynasty from Watergate to Iraq and Lost History: Contras, Cocaine, the Press & ‘Project Truth’.