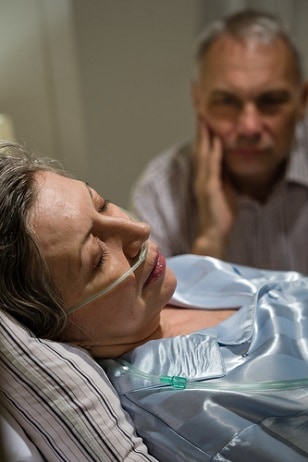 It’s time for death with dignity in America.

Adams, the creator of the popular Dilbert cartoon, recently posted an open letter on his website, discussing the prolonged agony that his father was going through during his last days this planet.

Adams writes in part, “I hope my father dies soon. And while I’m at it, I might want you to die a painful death too. I’m entirely serious on both counts.”

He continues, “My father, age 86, is on the final approach to the long dirt nap (to use his own phrase). His mind is 98% gone, and all he has left is hours or possibly months of hideous unpleasantness in a hospital bed. I’ll spare you the details, but it’s as close to a living Hell as you can get.”

Adams goes on to say that, “If my dad were a cat, we would have put him to sleep long ago. And not once would we have looked back and thought too soon…I’d like to proactively end his suffering and let him go out with some dignity. But my government says I can’t make that decision. Neither can his doctors. So, for all practical purposes, the government is torturing my father until he dies.”

By denying human beings the right to end their lives with dignity and on their own terms, and by prolonging the pain and suffering that they’re enduring, we are effectively torturing them.

As Adams points out, we treat our pets with more respect and dignity than we do human beings when it comes to death.

And then there are the financial implications of forcing people who are in terrible pain and who would prefer to end their lives with dignity to instead suffer through their last days of life.

In 2008, Medicare paid for a staggering $55 billion just to cover doctor and hospital bills during the last two months of patients’ lives.

And, according to some studies, 20 to 30 percent of the money spent on the last two months of a patient’s life may have had no impact on their condition.

For many of these people, the only thing that money did was prolong the time they were in pain, hooked up to the tubes, wires, and machines that were keeping them alive.

While many people would choose that, and should absolutely be given that option, it should not be forced on everybody.

There are some people who, in the final days of their lives, would prefer to gather their friends and family together, tell them how much they love them and say goodbye, and then drink a doctor-prescribed formula that will allow them to comfortably fall asleep and end their lives.

There’s a growing movement underway to stop forcing people to endure unbearable end of life pain when they don’t want to, and to let Americans decide when to end their lives on their own terms.

And New Mexico may become the latest state to let Americans die with dignity.

This week, a judge will be hearing a case brought by a group of doctors and patients, which would make physician-assisted death legal in New Mexico.

Aja Riggs, one of the plaintiffs in the case, whose uterine cancer is in remission, told local television that while she hopes her cancer never returns, “I want to be able to have the choice, to have some kind of control at the end.”

A lot of the opposition towards physician-assisted deaths and “Death with Dignity” laws comes from religious conservatives, who argue that suicide is a mortal sin.

When Oregon and Washington were passing their “Death with Dignity” laws, I had a lot of physicians and patients come on my radio show.

Talking to them, I learned that the percentage of people who actually killed themselves went down when they had access to a physician-provided drug like Phenobarbetol.

That’s because just knowing that they had the option to end their lives on their own terms helped them to become less afraid of death, and of dying in pain.

I had several people call my program who said that they were terminal and they had the physician-prescribed medicine on the table next to their bed.

Each one said that just knowing they had control over when they left this world, caused them, every day, to say, “I can make it through one more day.”

This very common experience of people in “Death with Dignity” states is why suicide rates actually drop when people know that they can generally leave whenever they want.

“Death with Dignity” laws allow them to discuss their own deaths with friends and relatives, in a way that puts them in control, instead of the more common experience in America, which is that terminally-ill people will simply shoot themselves or slit their wrists or overdose with an inappropriate drug, all in secrecy and shame, leaving behind a mess for their loved ones.

We owe it to Aja, and to Scott Adam’s father, and to the millions of Americans suffering with incurable diseases, to see that their last days on this planet aren’t marked by pain and suffering, but by peace and serenity. They deserve to at least have the option to end their lives, and to go out with dignity, when they believe the time is right.

The end of life should be as comfortable and even sacred as we can make it.

By giving dying people the option of when to end their lives, we can bring a much needed measure of dignity and humanity to the process of dying.