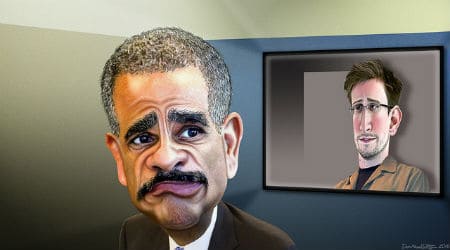 Former US Attorney General Eric Holder said in an interview that what NSA whistle blower Edward Snowden did was illegal but added “”We can certainly argue about the way in which Snowden did what he did, but I think that he actually performed a public service by raising the debate we engaged in and by the changes that we made . . .”

But nobody in the Obama administration still in office ever said that Snowden did a public service. He certainly did, since the NSA and other intelligence organizations had gone rogue. In essence, they unilaterally abrogated the Fourth Amendment of the US Constitution. PBS Frontline alleged that the NSA did not even read Obama into their warrantless surveillance of millions of Americans until 2010! In a system like that, the president isn’t really the president– the Deep State does as it pleases.

It is also clear that the NSA has been sharing metadata with local law enforcement, which has been using it to build cases against people without ever seeking a warrant, and then lying to judges about how they knew someone was, e.g., in touch with a drug dealer by phone. In other words, NSA surveillance has corrupted the entire justice system of the United States and made the Fourth Amendment a dead letter.

Such sharing of illicitly-gathered private information among US government agencies is becoming routine. (These cases have nothing to do with terrorism.)

So Holder’s sudden appreciation of Snowden is hypocritical. He went on to say,

“He’s broken the law. In my view, he needs to get lawyers, come on back and decide what he wants to do — go to trial, try to cut a deal . . . But in deciding what an appropriate sentence should be, a judge could take into account the usefulness of having that national debate . . .”

Mr. Holder is a man of the US justice system and knows exactly how it functions, so he knows very well that Snowden will not be allowed to present a whistle blower defense if he is tried in the US and that no judge will be allowed to take his public service into account.

So Holder is lying. The only question is why. Is this an attempt to go on justifying the Obama administration’s despicable war on whistle blowers? Or does Holder think Snowden will be so stupid as to be enticed back with a few false promises?

Here is a revised version of what I wrote on this issue when other Obama administration officials made similar dishonest statements, substituting Holder:

Holder is either amazingly ignorant or being disingenuous when he suggests that Snowden would be allowed to “make his case” if he returned to the US. No one outside the penal justice system would ever see him again, the moment he set foot here, assuming he was not given a prior deal. He could maybe try to explain himself to the prison guards, assuming they didn’t stick him in solitary. Here are some reasons Mr. Snowden would be unwise to trust himself to that system, given the charges against him:

1. The United Nations Special Rapporteur found that the US was guilty of cruel and inhuman treatment of Chelsea (Bradley) Manning, who was responsible for the Wikileaks and revelations of US killing of unarmed journalists in Iraq. Manning was kept in solitary confinement and isolated 23 hours a day for months on end, was kept naked and chained to a bed, and was subjected to sleep deprivation techniques, all three well known forms of torture, on the trumped up pretext that he was suicidal (his psychiatrist disagreed).

2. The Espionage Act under which Snowden would likely be tried is a fascist law from the time when President Woodrow Wilson (like Obama a scholar of the constitution) was trying to take the US into the war, and was used to repeal the First Amendment right of Americans to protest this action. It was used to arbitrarily imprison thousands and is full of unconstitutional provisions. In recent decades the act was used against whistleblowers only three times, but Barack Obama loves it to death. It is an embarrassment that it is still on the books and it reflects extremely badly on Obama and on Eric Holder that they revived it as a tool against whistle blowing (which is most often a public service).

3. John Kiriakou, who revealed CIA torture under Bush-Cheney, was prevented by the Espionage Act from addressing the jury to explain the intentions behind his actions and therefore forced into a plea bargain. None of the CIA officers who perpetrated the torture or their superiors, who ordered it, have been punished, but Kiriakou went to prison andand his family suffered because of the lack of income. The US public deserved to know about the torture rather than having Obama bury it the way he has buried so many other things wrong with the system.

4. National security officials such as Snowden are not covered by protections for whistleblowers in the Federal government, as Thomas Drake discovered. Drake helped bring to public attention the National Security Agency abuses that Snowden eventually made more transparent. But he was forced to plea bargain to a charge of misusing government computers. He lost his career and his retirement, for trying to let us know that when faced with a choice between a surveillance system that was indiscriminate and one that was targeted, the US government went indiscriminate. Indiscriminate is unconstitutional.

5. Not only did the US torture Manning, US officials have on many occasions practiced arbitrary arrest and imprisonment and torture. Most often these policies have been enacted abroad, as at Abu Ghraib, Bagram, Guantanamo, and black sites in countries such as Poland. But arbitrary arrest, trigger-happy killings, and extended solitary confinement are all practiced domestically as well, on America’s vast gulag of 2.4 million prisoners, 4/5s of them black or brown. A fourth of all the prisoners in jail in the entire world of 7 billion people are in the United States. At any one time 80,000 US prisoners are in 23-hour-a-day solitary confinement. Abu Ghraib wasn’t a low-level military excess. It was simply the transposition to Iraq of the ideals of an incarcerating society, dedicated to disciplining and interrogating those who fall into the system’s hands. You don’t get these outcomes– a fourth of the world’s prisoners and a small city worth people in solitary confinement– by accident. These abuses are systemic, and worsened by the privatization of prisons. Eric Holder’s notion that there is a fair trial to be had for Snowden in this cruelly flawed system is bizarre.

Holder is a bright and informed man and knows all this. I vote for disingenuous. He is just trying to deflect Snowden’s obvious popularity with the public and is trying imply that Snowden’s revelations put the issue behind us. They haven’t.