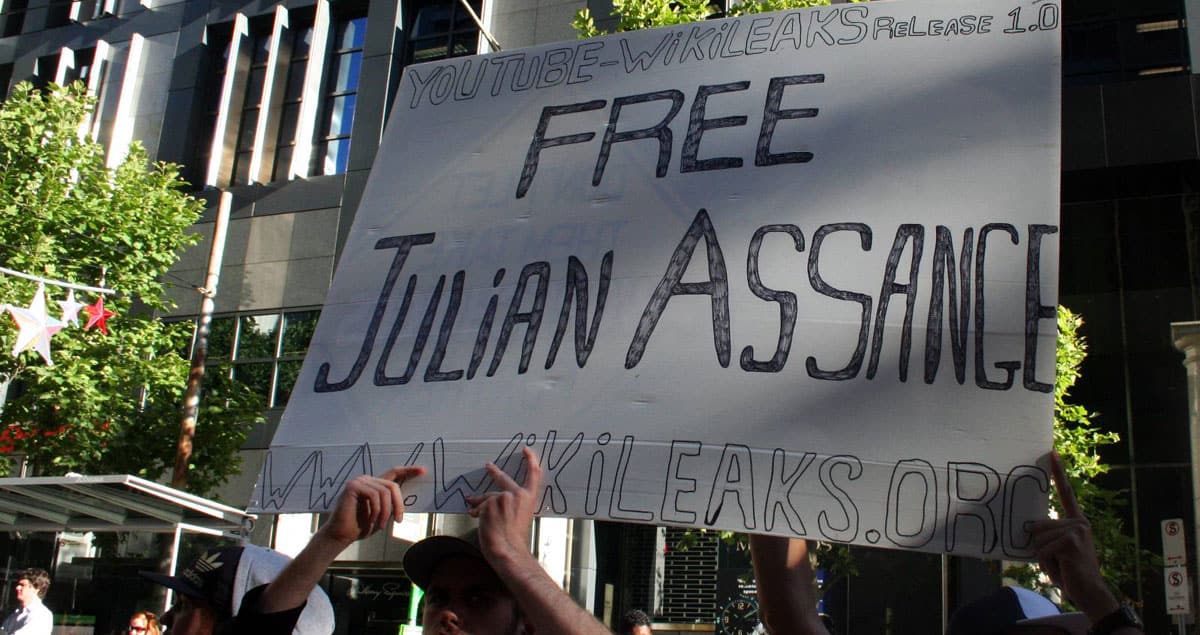 As we approach the 20th anniversary of 9/11, in the midst of a wrenching reassessment of our debacle in Afghanistan and the failed policy of endless wars, we cannot ignore the persecution of those who revealed the brutality of that war and the lies on which it was founded.

It is deplorable that the Biden administration is stubbornly pursuing the criminal prosecution of Julian Assange, founder of WikiLeaks, who exposed the corrupt motives and doomed policies behind the War on Terror. This unprecedented political prosecution poses a grave threat to truth telling and freedom of the press.

Commentators across the media have drawn parallels between the U.S. withdrawal from Kabul and the Fall of Saigon in 1975. Four years before the exit from Vietnam, the New York Times, the Washington Post and seventeen other newspapers published the Pentagon Papers, a classified archive of thousands of documents showing that U.S. intervention in Vietnam had been wrong from the start, and prolonged for decades under four presidents (eventually five) by their deliberate, continuous deception of Congress and the public about nearly every aspect of the war.

One of us, Daniel Ellsberg, released those files and—contrary to his criminal indictment under the same charges now facing Julian Assange—he is now widely regarded as having been right to do so. Fifty years after his case was dismissed on grounds of governmental criminal misconduct against him, the American bombing and occupation of Vietnam is viewed near-unanimously as an ill-fated policy whose pursuit was morally wrong. Thanks to the revelations by Assange and his source Chelsea Manning a decade ago, and by others more recently – including the “Afghan Papers” just released by Craig Whitlock – it will not take that long for Americans to see our occupation and bombing of Afghanistan in that same light.

When Assange published hundreds of thousands of classified military and diplomatic documents in 2010, the public was given an unprecedented window into the lack of justification and the futility of the wars in Afghanistan and Iraq. The truth was hidden by a generation of governmental lies under four presidents, as was clear evidence of war crimes, corruption, and more civilian deaths than had ever been reported. These files led to a major increase in war reporting in 2010 https://www.pewresearch.org/2010/08/03/wikileaks-puts-afghanistan-back-on-media-agenda/. They have been used as evidence in court findings that drone strikes violate criminal law and that involved senior U.S. officials should be prosecuted. They showed the American public what their government was doing in their name with their tax dollars.

Assange described the ethos of WikiLeaks: “The goal is justice, the method is transparency.” At an anti-war rally in London in 2011, he said, “if wars can be started by lies, peace can be started by truth.” Manning, the U.S. Army whistleblower who leaked the files from her command post in Iraq, told the judge in her 2013 court-martial, “I wanted the American public to know that not everyone in Iraq and Afghanistan were targets that needed to be neutralized, but rather people who were struggling to live in the pressure cooker environment of what we call asymmetric warfare.” Manning and Assange acted on their belief that an informed public deserved to see the evidence of the folly of these wars and the horrors of how they were conducted.

We too see these parallels. Two of us, Ellsberg and Noam Chomsky, testified for Assange at his extradition hearing last year. In Ellsberg’s words then, “I observe the closest of similarities to the position I faced, where the exposure of illegality and criminal acts institutionally and by individuals was intended to be crushed by the administration carrying out those illegalities.” He also said that he considers the WikiLeaks publications “to be amongst the most important truthful revelations of hidden criminal state behavior that have been made public in U.S. history.” The American public “needed urgently to know what was being done routinely in their name, and there was no other way for them to learn it than by unauthorized disclosure.”

When the files were first published by WikiLeaks, with Joe Biden as Vice President, the Obama administration empaneled a grand jury to investigate. In 2013, it declined to prosecute in view of what it called the “New York Times problem”—the dilemma of indicting Assange for the very same kind of investigative journalism that mainstream media engages frequently (though not as much as they should). But in May 2019, viewing the press as “the enemy of the people,” the Trump Justice Department indicted Assange on 17 counts under the much-abused Espionage Act of 1917 and one count under the Computer Fraud and Abuse Act.

No media outlet or journalist has ever been successfully prosecuted under the Espionage Act for publishing truthful information in the public interest, which is protected by the First Amendment. A conviction of these charges would send a message to reporters around the world—Assange is an Australian citizen, not an American—that the U.S. government will decide what can and cannot be published about its misdeeds, even beyond its borders.

Assange warned the public that the goal in Afghanistan “is to have an endless war, not a successful war.” At the antiwar rally he said that the point was to “wash money out of the tax bases of the United States…into the hands of the transnational security elite.” Last month, as troops were beginning to pull out of Afghanistan, video of these comments went viral https://twitter.com/wikileaks/status/1427929346262642688, with more than three million views in a week. Assange’s warning in 2011 is conventional wisdom in 2021.

So why isn’t he a free man? On January 4, 2021, a British judge denied the U.S. extradition request on grounds that sending Assange to the U.S. prison system would put him at risk of suicide. In Trump’s final days in office, the U.S. government appealed that decision. But Biden is president now, and his administration could end these proceedings at any moment. President Biden and his newly appointed Department of Justice have proudly spoken about the differences between his administration and the last one, including a renewed commitment to the freedom of the press.

Biden now owns the prosecution of Julian Assange by failing to drop the charges and instead actively pursuing the appeal. Biden stuck to his word and finally ended the war in Afghanistan. But he cannot close this chapter with the man who told the truth about that war still in prison.