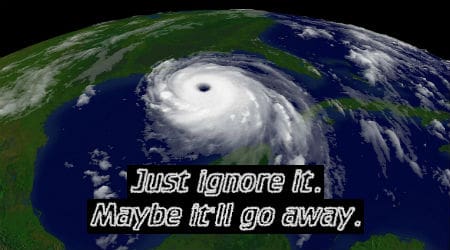 Climate silence lives. Despite pleas from editorial writers, columnists, and scientists, Chris Wallace, the moderator of the third and final presidential debate ignored arguably the most important issue facing the next president — climate change.

Thus the 2016 election continues the inexplicable tradition begun in the 2012 election in which presidential and vice presidential debate moderators remained silent on the gravest preventable threat to the health and well-being of all Americans.

On Tuesday, Bloomberg’s editorial board said this silence “on one of the most momentous and difficult issues facing their nation and the world” is “difficult to comprehend and harder to justify.” They pleaded: “Wallace should make room for climate change in the discussion.”

Leading scientists also urged a focus on the crucial climate issue in the final debate. And Nobel prize-winning economist columnist Paul Krugman wrote in a New York Times column two weeks ago that continuing to ignore this most important of issues “would be almost criminally irresponsible.”

All to no avail. In the immediate aftermath of the debate, commentators are rightfully shocked over Trump’s statement that he refuses to say he will accept the election results.

But if we fail to avoid multiple irreversible catastrophic climate impacts — from Dust-bowlification to sea level rise to ocean acidification to ever-extremer weather — future generations are going to care about little else for decades if not centuries. And they will be rightfully shocked that major figures in the U.S. media failed to raise the issue in presidential debates when it mattered most.