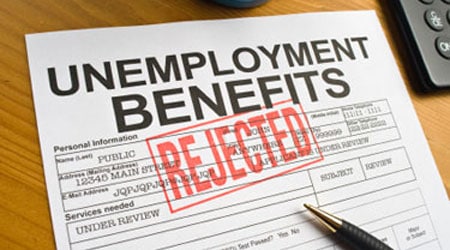 Is this really how we want to start the new year, by denying unemployment benefits to more than a million Americans who have lost their jobs? The bipartisan budget agreement passed by Congress and signed by President Barack Obama protects military spending, but promises to throw the most desperate in our economy into increased financial hardship, thrusting hundreds of thousands of families beneath the poverty line. The long-term unemployment rate is at the highest it has been since World War II, while the percentage of those receiving the benefits is at its historic low. Meanwhile, Wall Street bankers are popping the corks, celebrating a banner year for the stock market. As brokers await their bonuses, many more of the unemployed will head for the breadlines.(AP)

“This is the wrong thing to happen at the wrong time for our economy,” Imara Jones told me. He is the economic justice contributor for Colorlines.com, and served in the Clinton White House, where he worked on international trade policy. “Jobless benefits are actually stimulative to the economy,” he said. “Every $1 we provide to someone of unemployment benefits yields $1.60 in economic activity. And that’s why the loss of these benefits is going to rob our economy of $41 billion.” People living on the edge financially spend what they have to get by. Those in the top echelons of our economy, the top 1 percent, can take their income and hold on to it, or stash it away into an offshore account.

The unemployment-insurance program traditionally granted 26 weeks of replacement pay for workers who lost their jobs through no fault of their own. The extended benefits, signed into law by President George W. Bush, lengthened the time period to up to 99 weeks. Benefits average just $300 a week. According to The Washington Post, the average job search lasts 35 weeks, so the current 26-week benefit will create added stress on families already struggling.

Congress could renew the extended benefits. Sen. Jack Reed, a Democrat of Rhode Island, and Sen. Dean Heller, a Republican of Nevada, have put forth a bill that would preserve the extended benefits for three months. Heller said in a press release: “Providing a safety net for those in need is one of the most important functions of the federal government. As Nevada’s unemployment rate continues to top the charts nationwide, many families and individuals back home do not know how they are going to meet their basic needs.”

Although this proposal is bipartisan, it is expected to be blocked by Republicans when it comes to a procedural vote around Jan. 6, unless five more GOP senators can be convinced to support it. Even if it passes the Senate, the bill would still face a House of Representatives controlled by Republicans who are generally hostile to any extension.

On the other end of the economy, a year-end stock-market rally is expected to boost the massive bonuses Wall Street is preparing to hand out. The largest Wall Street firms have reportedly set aside more than $91 billion for year-end bonuses. In response, an activist group called The Other 98% has launched a petition calling on employees of Chase, Citigroup, Wells Fargo, Goldman Sachs, Morgan Stanley and Bank of America to donate their bonuses to the 10 million Americans displaced by the housing crisis.

Alexis Goldstein worked for years on Wall Street, and now is the communications director for The Other 98%. She told us on the “Democracy Now!” news hour, “Wall Street could take $60 billion out of their bonuses and help … fund something called the National Housing Trust Fund for two years. It’s a program that, if funded at $30 billion for 10 years, could end homelessness in America.” She points out the bonuses are essentially publicly financed because Wall Street banks obtain funds from the Federal Reserve at very low rates. These banks also can afford huge bonuses, she says, because “they continue to commit crimes that are very profitable.” Goldstein noted two criminal settlements made by JPMorgan Chase, one for $13 billion for mortgage fraud, and another for $300 million for manipulating electricity rates in California.

Inequality entered mainstream public discourse through the activism of Occupy Wall Street. The cold, economic reality of it is hitting more homes this week, as unemployment benefits expire. Congress can, and should, renew them. Whether it does depends on people who care speaking out.