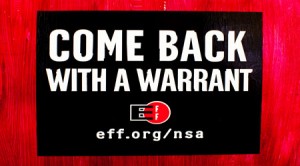 All three branches of the U.S. government are now largely under the control of forces with stunning contempt for basic legal processes required by the Bill of Rights.

It’s now painfully clear that the president has put out a contract on the Fourth Amendment. And at the Capitol, the hierarchies of both parties are stuffing it into the trunks of their limousines, so each provision can be neatly fitted with cement shoes and delivered to the bottom of the Potomac.

Some other Americans are on a rescue mission. One of them, Congressman Justin Amash, began a debate on the House floor Wednesday with a vow to “defend the Fourth Amendment.” That’s really what his amendment — requiring that surveillance be warranted — was all about.

No argument for the Amash amendment was more trenchant than the one offered by South Carolina Republican Jeff Duncan, who simply read the Fourth Amendment aloud.

To quote those words was to take a clear side: “The right of the people to be secure in their persons, houses, papers, and effects, against unreasonable searches and seizures, shall not be violated, and no Warrants shall issue, but upon probable cause, supported by Oath or affirmation, and particularly describing the place to be searched, and the persons or things to be seized.”

Edward Snowden’s heroic revelations have made it possible for some House members from both parties to blow away the fog that shrouds so much tap dancing on Capitol Hill. When the Amash amendment went to the floor, there was no place left to hide.

The stench at the pinnacle of GOP power hardly surprises most Democrats. But on civil liberties—as on so many other profound issues—a similar odor is emanating from the upper reaches of Democratic power on Capitol Hill, where Pelosi and Hoyer are far from the only Democrats who have become reflexive servants of indefensible Obama policies.

Consider some of the other Democratic luminaries in the House who voted against the Amash amendment: The Democratic National Committee’s chair, Debbie Wasserman Schultz. The Democratic Congressional Campaign Committee’s former chair Chris Van Hollen. The DCCC’s current chair, Steve Israel.

Deserving special mention for their deplorable votes against Amash’s amendment are Sheila Jackson Lee from Houston and Jan Schakowsky from Chicago. Both are vice chairs of the Congressional Progressive Caucus.

I’ve been critical of the Progressive Caucus for enabling Obama’s rightward moves by doing scant pushback. But credit where due: on Wednesday, aside from Jackson Lee and Schakowsky, the other six officers of the Progressive Caucus and a large majority of its more than 70 members supported the Amash amendment. Eloquence in the floor debate came from John Conyers (the lead co-sponsor of the Amash amendment), Jared Polis, Zoe Lofgren and Jerrold Nadler.

Yet they were no match for the White House, with its media spin machine and behind-the-curtain arm twisting.

President Obama has a firm grip on levers of power, and anyone who thinks that his administration has been chastened enough to tread more carefully on civil liberties is engaged in wishful thinking.

While the House has grown somewhat restive, the Senate has remained notably pliant for the surveillance state. An egregious—and, for some, surprising—example is Al Franken, who declared his support for the NSA surveillance program when news of it broke in early June. “I can assure you, this is not about spying on the American people,” Franken said. From his Senate office, one press release after another has been packed with blather like overstuffed sausages.

Franken is now saying he’ll introduce a bill for “transparency” because the public will support the current surveillance programs if they grasp what’s really involved: “I think that if there were greater transparency, Americans would have a better understanding of these programs.” Count on transparency to be a buzzword cloak for more of the same.

Another Democratic senator, Ron Wyden, has been vastly more candid. At a forum the day before the Amash amendment vote, Wyden said that for surveillance, as far as the Obama administration is concerned, “the authority is essentially limitless.”

An ACLU staff attorney, Alexander Abdo, was driving at the same point when he wrote days ago: “Perhaps the most fundamental problem with the NSA’s constitutional theory is that it has no limit. If the constitution is blind to the collection of our data and limits only the NSA’s later uses of it, then the NSA truly can ‘collect it all’ now and ask questions later. Our emails, phone calls and internet activities would all be very simple for the NSA to collect under the NSA’s theory. But it could go much further. It could put video cameras on every street corner, it could install microphones in every home and it could even remotely copy the contents of every computer hard drive.”

All three branches of the U.S. government are now largely under the control of forces with stunning contempt for basic legal processes required by the Bill of Rights. Mere words and mild reforms from members of Congress may mollify the gullible, but only a direct challenge to the Obama administration’s policies can rise to the level of the current historic imperative to restore civil liberties in the United States.

Norman Solomon is co-founder of RootsAction.org and founding director of the Institute for Public Accuracy. His books include “War Made Easy: How Presidents and Pundits Keep Spinning Us to Death” and “Made Love, Got War: Close Encounters with America’s Warfare State”.