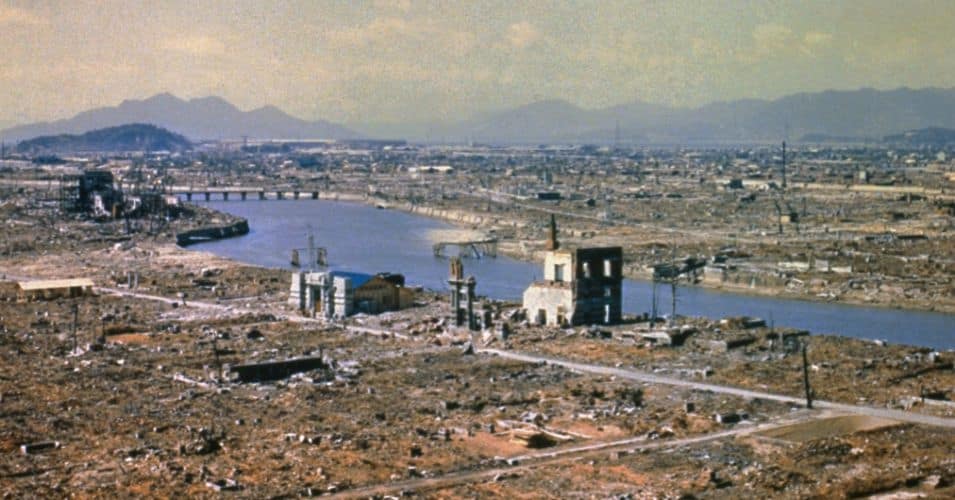 In March of 1946, eight months after the atomic bomb was dropped, the city of Hiroshima stood in ruins.
(Photo: Wikimedia Commons)

Seventy years ago, two nuclear weapons targeted against cities which met the criteria of having “densely packed workers’ homes,”  killed more than 200,000 people in the Japanese cities of Hiroshima and Nagasaki. In the years that have followed, many more have suffered and died from cancers, radiation disease, genetic damage and other fallout from the atom bombings.

The myths that the A-bombings were necessary to end the war against Japan and that they saved the lives of half a million US troops remain widely believed. The myths serve as the ideological foundation for continuing U.S. preparations for nuclear war, which in turn has served as the primary driver of nuclear weapons proliferation and the creation of deterrent nuclear arsenals.

It is no accident that this wartime propaganda took on a life of its own.  Japanese and other journalists’ film footage and photos of the devastation wrought by the A-bombs taken within days of the A-bombings, were seized by U.S. Occupation forces and were locked away in Pentagon vaults for more than two decades. In 1995, the Smithsonian Museum’s initially excellent 50th anniversary exhibition was censored beyond recognition to prevent people from seeing what the A-bombs inflicted on human beings. Also removed were the facts that U.S. Secretary of War Stimson had advised Truman that Japan’s surrender “could be arranged on terms acceptable to the United States” without the atom bombings. (That arrangement was later deemed acceptable – even necessary – by U.S. military occupation authorities.)  Indeed, before it was sterilized, the exhibit included quotations from senior US wartime military leaders including Admiral Leahy and General (later President) Eisenhower who thought, “It wasn’t necessary to hit [Japanese] with that awful thing.”

Scholars now know that numerous factors contributed to Truman’s decision to destroy Hiroshima and Nagasaki and their civilian populations. These include Truman’s political calculations as he looked to the 1948 presidential election, vengeance, racism, institutional inertia, and the callousness that came with already having burned more than sixty Japanese cities to the ground.

But, as General Leslie Groves, the commander of the Manhattan Project, told senior scientist Joseph Rotblat, the bombs came to be designed for the Soviet Union. The determinative reasons for the A-bombings were to bring the war to an immediate end so that the US could avoid sharing influence with the USSR in Northern China, Manchuria and Korea and to intimidate Stalin and other Soviet leaders by demonstrating the apocalyptic power of nuclear weapons and Washington’s willingness to use them – even against civilians. Little Boy and Fat Man, as the bombs were named, announced the beginning of the Cold War.

Americans also continue to suffer from the misconception that nuclear weapons have not been used since the Nagasaki A-bombing on August 9, 1945. In fact, the US, and to a lesser degree the other nuclear powers, have repeatedly used their nuclear arsenals. Long ago, Daniel Ellsberg, a senior Pentagon nuclear war planner for Presidents Kennedy, Johnson and Nixon, explained that the US has repeatedly used nuclear weapons “in the way that you use a gun when you point it at someone’s head in a confrontation….whether or not you pull the trigger…[and] You’re also using it when you have it on your hip ostentatiously.”  During wars and international crises, the US has prepared and/or threatened to initiate nuclear war on at least thirty occasions – at least 15 times during the Korean and Vietnam Wars and crises with China,  and at least 10 times to reinforce US Middle East hegemony.  And each of the other eight nuclear powers has made such threats or preparations at least once.

Eric Schlosser, author of Command and Control, reported last December to the  International Conference on the Consequences of Nuclear Weapons, attended by representatives of 158 governments that luck, not state policies and regulations, best explains why humanity has survived nuclear blackmail, reckless dependence on deterrence, miscalculations and nuclear accidents.

Still more sobering are the recent scientific studies demonstrating that even a “small” exchange of 50-100 nuclear weapons targeted against cities would result in fires, smoke that would cause global cooling,  and up to two billion deaths from famine.

All of which lead to a series of existential questions: As we race against time to save our civilizations from the impending ravages of climate change, why are our governments preparing to inflict nuclear annihilation?  Why do we tolerate the continued deployment and stockpiling of nearly 16,000 nuclear weapons, 90% of them in U.S. and Russian arsenals?  Why have the P-5 nuclear powers (US, Russia, Britain, France and China) refused to implement their 45 year-old Nuclear Non-Proliferation Treaty (NPT) obligation to begin negotiations for the complete elimination of their nuclear arsenals? And why did the US condemn this past spring’s NPT Review Conference to failure by refusing to honor its long-standing commitment to co-convene a conference to lay the foundations for a nuclear weapons and weapons of mass destruction-free zone in the Middle East?

There are high costs to denying history and reality. In a worst case scenario, the failure of the US and the other nuclear powers to heed the warning of A-bomb survivors that human beings and nuclear weapons cannot coexist is the end to life on earth as we know it.

The majority of the world’s governments are not in similar denial.  The NPT Review Conference’s one achievement was the commitment of the vast majority of the world’s governments the Humanitarian Pledge. Initiated by Austria, 113 governments pledged “to cooperate with all relevant stakeholders, states, international organizations, the Red Cross and Red Crescent Movement, parliamentarians and civil society, in efforts to stigmatize, prohibit and eliminate nuclear weapons in light of their unacceptable humanitarian consequences and associated risks.” The gulf between the non-nuclear weapons states and the nuclear powers has widened, and in time the former may use their economic, political and other power in the struggle to secure humanity’s future.

On August 6, many in Japan will appreciate the silent presence of U.S. Ambassador Caroline Kennedy at Hiroshima’s official 70th anniversary commemoration, but there will be no apology. And, even as we celebrate and work for the implementation of the nuclear deal with Iran,  the sorry truth is that the US is now on track to spend one trillion dollars to “modernize” its nuclear arsenal and delivery systems, with the other nuclear powers following the U.S. lead. And, despite his pledge in Prague, President Obama has retired fewer nuclear weapons that any other US post-Cold War President.

As the US-Russian confrontation, marked by implicit and explicit nuclear threats reminds us,  we are living on borrowed time.  Seventy years after the Hiroshima and Nagasaki A-bombings, human survival is still hanging in the balance. Midst the carnival of the 2016 presidential election, let us insist that those who seek to rule us and the world finally learn the lessons of Hiroshima and Nagasaki: Never again to anyone! No more Hiroshimas! No More Nagasakis! No more nuclear weapons!

Dr. Joseph Gerson is Director of Programs of the American Friends Service Committee in New England. His most recent book is Empire and the Bomb: How the US Uses Nuclear Weapons to Dominate the World. His previous books include The Sun Never Sets and With Hiroshima Eyes.