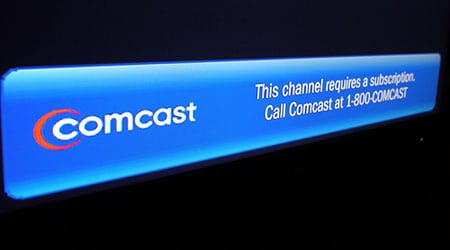 By Dominic Rushe
The Guardian

Consumer groups reacted angrily to the merger of cable giant Comcast and Time Warner Cable on Thursday, claiming the combination could “throttle” choice on the internet.

Comcast’s proposed $45.2bn takeover of TWC will create a media behemoth that will dominate broadband internet access across the US. Comcast, which owns NBC Universal, will also cement its position as the pre-eminent force in cable TV.

Jodie Griffin, senior staff attorney at consumer rights group Public Knowledge said: “This is a deal that needs to be blocked.” She said Comcast was likely to use the extra leverage to “drive up costs and reduce choices for consumers.”, and claimed the new company would be too powerful, becoming a “gatekeeper” capable of “throttling competition.”

Comcast, America’s largest cable company, took over NBC Universal in 2011 and was given a long list of conditions by the Federal Communications Commission (FCC). Among them was a commitment to net neutrality – a ban on internet service providers from favouring affiliated content or blocking or slowing web content sent to homes and businesses. At present, Comcast is bound to abide by net neutrality rules until the end of 2017.

Netflix CEO Reed Hastings has attacked Comcast, accusing the cable firm of capping data it provides to streaming companies like his own in order to favour Comcast’s own Xfinity video-on-demand app. Recent studies show that Comcast users receive their Netflix media at significantly slower speeds than those using other internet service providers.

Griffin said there were other examples where Comcast had failed to live up the pledges it had made or was pushing hard at the limits of the rules. She cited Comcast’s dispute with Bloomberg Television. Bloomberg clashed with Comcast after the cable firm refused to put its business news channel alongside its own affiliated news stations – including rival finance channel CNBC and MSNBC – in its cable lineup. The FCC ruled last year that the refusal to “neighbourhood” Bloomberg’s channel close to its rivals contravened the conditions of its NBC merger.

“In our experience, allowing this merger to go through with added conditions is not a workable solution,” said Griffin.

Craig Aaron, president of internet rights lobby group Free Press, said that while the immediate effects of the merger were likely to be price rises and less competition, the long-term consequences could be even more serious.

Alongside Netflix, Comcast has been criticised for slowing users’ broadband connections by the lobby group Electronic Frontier Foundation (EFF) and by file-sharing and copyright website TorrentFreak for interfering with legal file-sharing on the web.

“This is a company that has already been caught blocking internet traffic,” said Aaron. “But it’s clear their long-term plan is to take a free and open internet and turn it into something like cable TV, where they pick the channels and they speed them up and slow them down based on who pays them the most.”

“One company will effectively control the only data pipe going into a near majority of American homes, whether that’s internet TV or phones,” Stoltz said. “If that company gets to play favourites … that’s dangerous.”

Stoltz said the companies might not compete directly, but that their combined marketing and purchasing power would give them unprecedented clout over programming whether it was delivered to TVs or to the internet. “At this point that is largely an irrelevance,” he said.

The two firms have begun what looks set to be an expensive and protracted lobbying effort to sell the consumer benefits of the deal.

“If there is a benefit of a national scale of being able to grow in the future with capabilities that are expensive and untested that require a national presence, we are able to do that,” said Roberts.