Webinar: The Climate Legislation – An Analysis

The recent legislation passed by Congress and signed by Pres. Biden has rightfully been called “historic”, representing, as it does, the first major legislative package to address the emergency of climate change. At the same time, it is no secret that major portions of the proposed legislation were scrapped in order to obtain the last couple of votes needed for passage.

In this edition of Other Voices Online we’ll take a deep dive into the climate legislation: what’s in it, what isn’t in it, and what still needs to be done? We’ll be guided in this examination by one of the world’s leading climate scientists, Chris Field of Stanford University’s Woods Institute for the Environment.

Be a part of the conversation! At least half of every Other Voices Online webinar is dedicated to hearing from you. Ask your questions live online and on camera or submit your questions via chat. 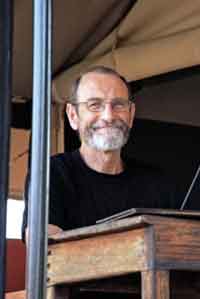 Chris Field is the Perry L. McCarty Director of the Stanford Woods Institute for the Environment and the Melvin and Joan Lane Professor for Interdisciplinary Environmental Studies at Stanford University.

Prior to his 2016 appointment at the Stanford Woods Institute, Field was a staff member at the Carnegie Institution for Science (1984-2002) and founding director of the Carnegie’s Department of Global Ecology (2002-2016).

Field’s research focuses on climate change, especially solutions that improve lives now, decrease the amount of future warming, and support vibrant economies. He has been deeply involved with national and international efforts to advance understanding of global ecology and climate change.

Field was co-chair of Working Group II of the United Nations’ Intergovernmental Panel on Climate Change (IPCC) (2008-2015), where he led the effort on “Managing the Risks of Extreme Events and Disasters to Advance Climate Change Adaptation” (2012), and “Climate Change 2014: Impacts, Adaptation, and Vulnerability(2014). His widely cited work has earned many recognitions, including election to the US National Academy of Sciences and the American Academy of Arts and Sciences, the Max Planck Research Award, and the Roger Revelle Medal. Field is a member of the Board of Directors of World Wildlife Fund (US) and the Board of Trustees of the California Academy of Sciences. He is a fellow of the American Association for the Advancement of Science, the American Geophysical Union, and the Ecological Society of America.